If this can happen, then surely we can also bring people such as George W. Bush and Dick Cheney to justice. Genocide in Rwanda or genocide in Iraq are of equal weight – both are heinous crimes under international law and should be dealt with accordingly. 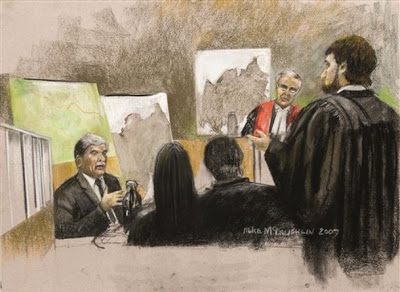 Retired general Romeo Dallaire is seen in a court sketch before judge Andre Denis and crown attorney Alexis Gauthier, standing, during his testimony at the war crimes trial of Desire Munyaneza, Tuesday, Oct. 2, 2007 in Montreal. Munyaneza, a former Toronto resident, was accused and is now convicted of genocide, crimes against humanity and war crimes for leading a militia gang that allegedly killed and raped civilians during the Rwanda genocide in 1994. Graphic: Source.
Canadian Judge Convicts Rwandan in Genocide
By Ian Austen / May 22, 2009

OTTAWA — A Rwandan who entered Canada more than a decade ago claiming to be a refugee was convicted Friday in a Montreal court on seven charges related to the 1994 genocide.

The conviction was the first under a Canadian war crimes law introduced nine years ago and followed an unusually complex two-year trial that involved hearings in Africa and in Europe.

The Rwandan, Désiré Munyaneza, 42, a Hutu and a son of a prominent businessman, was accused of mass murders, rape and pillaging in the Butare region of the small central African nation.

Justice André Denis of Quebec Superior Court found him guilty of war crimes, crimes against humanity and genocide in a nonjury trial.

“The accused’s criminal intent was demonstrated beyond a reasonable doubt, as was his culpable violence,” he wrote in his decision, which ran more than 200 pages and was published in English and French.

“The educated son of an important bourgeois family in Butare, Désiré Munyaneza was at the forefront of the genocidal movement.”

The judge added that while he found prosecution witnesses, many testifying anonymously and in private for their security, to be generally credible, he had a hard time believing most of the defense witnesses.

Lawyers for Mr. Munyaneza said outside the courthouse that they would appeal the verdict.

The bloodshed in Rwanda began in April 1994 when extremists among the majority Hutu population organized mass killings of Tutsis and moderate Hutus. The passage of time as well as the extent of the massacres — which took an estimated 800,000 lives — has made prosecutions difficult.

Many witnesses offered harrowing accounts of Mr. Munyaneza’s role in the genocide. One witness passed out after testifying that she and several other women had been raped repeatedly over several days by a group led by Mr. Munyaneza.

Another witness, identified only as RCW-11, described his participation in a daylong killing tour led by Mr. Munyaneza. It began at a mosque where Tutsis were removed from their hiding place in a ceiling and killed.

From there, the killers moved to a Roman Catholic church where, according to other witnesses, about 500 Tutsis had sought shelter. After initially assuring the Tutsis that they would be taken to a safer place, the killers spent the next five hours removing them in small numbers and killing them. The day concluded with the killing of Tutsis hiding in an Adventist church.

RCW-11 himself was convicted in Rwanda of taking part in the genocide.

News of the conviction was received positively by many in Kigali, Rwanda’s capital.

“Maybe it’s a beginning that many of them will be brought to justice,” said Raphael Mipali, a musician. “The priority first for me is to bring these people to Rwanda, because this is where genocide was committed. But if there is no way for them to come to Rwanda, they should be brought to the book somewhere else.”

An international tribunal in Tanzania, established to supplement Rwanda’s justice system, has convicted about 30 people and acquitted 6.

The Montreal case was aided by a continuing tribunal case, in which six other people were being tried for massacres in Butare. Mr. Munyaneza was described in his trial as a militia leader who had worked with them.

Mr. Munyaneza arrived in Toronto in 1997 and sought refugee status, which was ultimately denied. Late that year a complaint to the Royal Canadian Mounted Police from a Rwandan in Canada prompted an inquiry. After investigators traveled to Rwanda six times to gather evidence, Mr. Munyaneza was arrested in 2005.

Under the war crimes law, which allows Canada to prosecute residents for acts they committed in other countries, Mr. Munyaneza, who has two children, faces life in prison when he is sentenced Sept. 9.

Switzerland and Belgium have also convicted Rwandans for crimes related to the genocide.