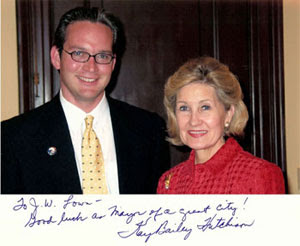 (Former) San Angelo Mayor J.W. Lown, in a photo with (and autographed by) U.S. Sen. Kay Bailey Hutchinson. Photo from jwloan.com
San Angelo Mayor springs a Hell of a surprise on his town
By Richard Connelly / May 21, 2009

See ‘Texas Mayor Resigns To Be With Gay Lover,’ by Mona Elyafi, Below.

Out there in West Texas, they know how to do things right. Like spring surprise mayoral resignations.

The mayor of San Angelo, J.W. Lown, abruptly announced his resignation just days before he was to be sworn in for his fourth term as mayor, the San Angelo Standard Times reports.

Surprise Number One: He made the announcement from Mexico, where he had suddenly bolted to.

Surprise Number Two: He was resigning because he is in a relationship with an illegal alien and they’re trying to fix the alien’s status.

Surprise Number Three: Both Lown and the Mexican citizen are guys. As in HE’S GAY. In San Angelo.

Lown is obviously a well-respected public servant: He won the most recent re-election with 89 percent of the vote, and stunned city council members were effusive in their praise for his work.

But it’s also obvious they didn’t know he was in the closet.

Lown told the paper he would come back to the city “if the people of San Angelo will welcome me back.”

Let’s hope they do. It could be fascinating.

Some would be troubled by the illegal-alien thing, of course. Some because he was helping someone he knew was illegal, and was mayor of the town while doing so. Others might just hate the Messkins.

But the whole gay thing, in West Texas? Hard to say. You would hope people would be open-minded, but then again we’ve been to West Texas.

Boy, there’s a TV movie here for someone: Popular, young attractive mayor of a prairie town, torn by love, decides to go back to Mexico to help his partner get legal. He has to give up a job he also loves…and he has to come out.

J.W. Lown, get yourself an agent. 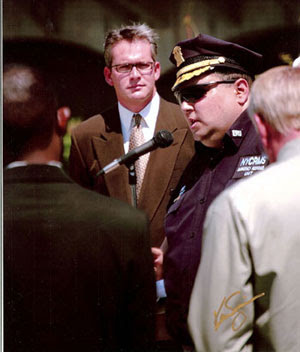 San Angelo, Texas Mayor J.W. Lown abruptly resigned from office effective immediately to be with his illegal alien gay lover, according to Perez.

Lown had just been elected to his fourth term in a landslide only a few weeks ago garnering about 89 percent of the votes.

Lown broke the news of his stepping down from Mexico where he flew to be with his partner. He tendered his resignation through a letter to City Manager Harold Dominguez.

Scheduled to take the oath of office last Tuesday for his fourth term as mayor, Lown did not appear at the event. In a telephone call late Wednesday afternoon from Mexico the Mayor explained that because he was in personal relationship with a man who does not have legal residency in the United States, he didn’t see fit to take the oath of office knowing he was “aiding and assisting” someone who was not a legal citizen.

“I made the final decision when I knew it was the right decision to make for me and my partner and our future – and for the community,” said Lown.

While Lown declined to provide the name of the person, he did confirm that his lover entered the United States five years ago to attend Angelo State University. Lown also said that their relationship didn’t start until after March. He and his partner are currently in Mexico in a hotel awaiting a visa to legally re-enter the US territory.

“I did the best I could,” Lown said. “I had to get down here and get everything in order to make a life for myself.”

The 32-year-old real estate owner who has dual citizenship in both the U.S. and Mexico, said that while he wasn’t sure how long it would take for his partner’s visa to be granted, the couple would only come back if “the people of San Angelo will welcome (them) back.”

Thanks to Jeff Jones and Harry Edwards / The Rag Blog

This entry was posted in RagBlog and tagged Gay, Immigration, San Angelo, Texas. Bookmark the permalink.