Carl Davidson :
What the big debate tells us about a
Republican presidency

Here’s my instant two cents on the first GOP ‘debate’: put your money in the body bag business. 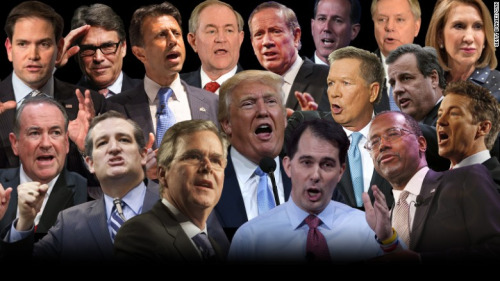 The Republican noise machine. Image from Keep On Keepin’ On.

First, if any of the top people here win the White House, put your money in the body bag business. Nearly every one of them trashed Obama in favor of new wars in the Middle East, with massive invasions and bombings of Iraq, Syria, Iran, Mexico, and anywhere else.

They were almost delusional with superpower hegemonism, the idea that just by acting like John Wayne and strutting around the world, everyone would cringe and bow. I kept laughing out loud at the stupid arrogance on display, but really, it’s not funny.

Second, get ready for a lot of women, mostly poor, to end up butchered in illegal back alley abortions. Those would be the outcomes of shutting down Planned Parenthood and restricting access to safe and legal procedures until they hardly exist. And if women don’t suffer in that way, Donald Trump declared open season on insulting women for their looks.

Third, forget about “Black Lives Matter.” The main thing that matters for these folks is more money and training for police. Anything else is “being divisive.” Likewise with unions. They tried to one-up each other on who could be more anti-union.

Fourth, the main thing holding the country back is too many poor and low-income working people getting health insurance through Obamacare. Get rid of it, let people “buy their own,” shred the safety net, and let the people fend for themselves. Then slash the taxes and regulations on business and the banks. More money for those on top. Forget about climate change. It only came up indirectly, in drilling for more oil and getting rid of more environmental protections.

Last, after all this, if you have any money to spare, put it in defense industry stocks. For all their neoliberalism, when it comes to the military, they’re all closet Keynesians. More money for war and the means of destruction. We need more capability “to kill people and break things,” as Mike Huckabee, the supposed “Christian,” put it.

There were a few tiny glimmers of sanity.

There were a few tiny glimmers of sanity, when Rand Paul defended a few civil liberties and Ohio’s John Kasich expressed some ordinary decency about health care for the poor, but these were exceptions by far.

In my 50 years of political organizing, I have never seen a GOP farther to the right, now embedded with right-wing populism and proto-fascism. Nor have the differences between the GOP and the Democrats been more stark on a number of key issues — the Iran deal, women’s rights, gay rights, Social Security and Medicare, just to name a few.

The real winner? Bernie Sanders, who, compared to this crew, stands out as a lighthouse of sanity, reason, honesty and decency.

This article was also posted at Keep On Keepin’ On and on the CCDS Links newsletter.

[Carl Davidson, a longtime activist and author, is a member of Steelworker Associates, is national co-chair of Committees of Correspondence for Democracy and Socialism, and is on the national board of Solidarity Economy Network. A former vice-president and national secretary of SDS and news editor at the Guardian (U.S.), Carl lives in Western Pennsylvania. Read more articles by Carl Davidson on The Rag Blog.]