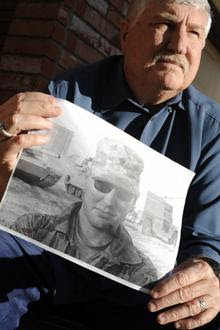 Eddy Porter holds a photo of his son, U.S. Army Spc. Casey Porter, who is returning for his second tour of duty in Iraq under the Department of Defense’s “Stop-Loss” program. Photo by Ronald W. Erdrich / Abiline Reporter-News.
Casey Porter : They’re selling us a bill of goods.
By Richard Whittaker / October 14, 2008

It’s always a good day at Newsdesk when Casey Porter calls, not least because it means that he’s still alive and in one piece. That’s not hyperbole, because Porter is currently in Iraq, one of the many US military personnel on the bad end of the bad deal known as stop-loss.

But in making the best of a bad day, Porter runs his own YouTube channel about his experiences in-country and what it’s really like on the ground.

The co-founder of Iraq Veterans Against The War’s Fort Hood ([near Kileen, Texas] branch called to give a heads-up about his latest video (which he’s still editing) about the remarkable world of commercial concessions on military bases. Troops coming back off combat missions are confronted by officially-sanctioned car dealers and jewelry firms that get them to part with their small salaries for pretty gewgaws.

“They don’t have any financial discipline and they’re not making good money, but it’s still better money than they’ve ever had,” said Porter, who once had a vendor try to sell him an $865 watch at a forward operating base. “We show the tricks and corruption in getting soldiers to spend their money.”

So why is this allowed to happen? Well, first off, the stores with the concessions are the same stores that supply the US military itself (“A mile away from open combat missions, there’s high-end stores,” said Porter. “If you walk into there, and you look at the video, you would think you were back in the states, except for the guys in miitary uniforms with guns.”) As for what the military gets, well, Porter put it bluntly: “A broke soldier is a re-enlisting soldier.”

‘Critics of the policy have dubbed it a backdoor draft that forces service personnel into extending their service.’
By Celinda Emison

[The following article about Casey Porter of Austin — filmmaker and co-founder of Iraq Veterans Against the War at Fort Hood — and the army’s stop-loss program, first ran in the Abilene Reporter-News on March 22, 2008.]

U.S. Army Spc. Casey Porter is depressed and angry because he is on his way back to a war zone.

Porter, 28, of Austin, is embarking on his second tour of duty in Iraq and is one of tens of thousands of U.S. soldiers who have been ordered to continue their service in the Army due to a policy reinstated in 2001 after the Sept. 11 terrorist attacks called “Stop Loss.”

“I feel stabbed in the back,” Porter said in an e-mail message from Kuwait earlier this week.

Stop Loss is a program which allows the military to temporarily halt all voluntary separations and retirements during times of war, deployments or national emergencies. The Army has issued a Stop Loss in conjunction with wars in Iraq and Afghanistan.

“Stop-Loss” is also the name of a new fictional movie that opens Friday. But for Casey Porter and more than 81,000 other soldiers, the policy is all too real.

Porter signed up for a four-year stint in 2004, after which he planned to go to college. Porter’s stint was to end Jan. 21 of this year, but as the date approached, he started to worry.

“I thought Stop Loss would be coming, but didn’t get orders until two months before I was going to get out,” said Porter, who is now in Kuwait waiting to be sent back to Iraq within the week for another 15 months.

Under the policy, soldiers who normally would leave when their commitments expire must remain in the Army, starting 90 days before their unit is scheduled to depart, through the end of their deployment and up to another 90 days after returning to their home base. The policy applies to all branches of the military, but currently is most used by the Army and National Guard.

“When a unit receives an alert order, we apply Stop Loss to that unit,” said Col. Bill Meehan of the Texas National Guard headquarters in Austin. “The No. 1 issue is whether the unit can do its mission. If you need 10 truck drivers for a mission, and you have 50, then there is some flexibility there. If it is the other way around, then there is obvious concern.”

“And it has been used occasionally over the past five years,” Meehan said. “We hear appeals on an individual basis. We want everyone to know we are concerned about the welfare of our soldiers and their families, and listening to our soldiers is what we are all about.”

Some military personnel say they are very aware that signing up for four years could mean eight years with reserve time and the possibility of Stop Loss orders.

Corp. Glynn Willson, 24, a Marine who is about go from Okinawa, Japan, to Iraq, said he knew about Stop Loss when he enlisted five years ago.

“When I enlisted, they (recruiters) made it very clear that I have eight years of obligated service,” Willson wrote in an e-mail from Japan. “If I serve that whole eight years active duty, then once I’m done, I’m done for good. But I am serving five years active duty. After I get out of the Marines in September, I’ll be a civilian, but they can still call me back up for up to 3 years. I know several people that this has happened to.”

Willson points out that so far, he is not under Stop Loss orders, but said if it does happen to his unit, he will fulfill his obligation.

“If I get Stop-Lossed in September, it means that I am still an active-duty Marine, and I am still a part of my current unit. I go back to work as usual, until the Stop Loss is revoked,” Willson said. “For someone to go AWOL (Absent Without Leave) over something so trivial is selfish. They are thinking about only themselves. It’s not about just you, it’s about the men and women standing next to you; that’s why you do what you need to do. Not for personal gain, but for your brothers and sisters in uniform. If a unit gets a Stop Loss and someone goes AWOL, think what that does for morale. Also, that person is not there doing his job, so everyone has to work harder to make that up.”

Critics of the policy have dubbed it a backdoor draft that forces service personnel into extending their service at least 18 months after their contracts are up. And theoretically they could face Stop Loss orders again.

Casey Porter’s father, Eddy, 61, a Vietnam veteran drafted in 1966 who lives in Abilene, believes the Stop Loss policy is wrong, especially with volunteers.

“Back then, (during Vietnam) if more men were needed, they were drafted,” the elder Porter said. “This is what I call a ‘selective draft.'”

Eddy Porter, who retired from teaching high school in Austin three years ago, remembers when his son told him he wanted to serve in the military.

“He comes from a military family, and at the time I told him it would be a good start to his life,” he said. “Had I known about the policy, I would’ve suggested he do something else.”

For several years before Eddy Porter retired from teaching, he routinely encouraged his students to talk to recruiters who visited the school.

“Then I began to learn that they were promising these students training and scholarship money,” Porter said. “Then once they signed up, the commitment was one-sided, and the students felt they had been lied to. I quit allowing the recruiters in my classroom after that.”

Since Stop Loss was reinstated in 2001, numerous soldiers have challenged the policy in court, but in most cases, the military’s policy has been upheld.

When Eddy Porter found out about the policy, he began writing congressmen and senators, and pointed out that Casey was now his only son. (Another son died from complications from diabetes.)

“I got a letter back from the Inspector General which basically said due to the global war on terror, we have to manage our all-volunteer army differently than in other conflicts,” Eddy Porter said.

“Sen. Hutchison is grateful for the dedication and sacrifice of our military personnel and their families,” Hutchison spokesman Matt Mackowiak said. “The Defense Department has assured Sen. Hutchison that they will review the need for Stop Loss restrictions on a monthly basis and only redeploy service members when it is absolutely necessary for our national security.”

Weeks before receiving his most recent orders to return to Iraq, Casey Porter formed a chapter of Iraq Veterans Against the War at Fort Hood.

“We want everyone to know, we are not against the soldiers at all,” Casey Porter says in a recent video on YouTube.

“We are against the war.”

Thanks to Debbie Russell / The Rag Blog