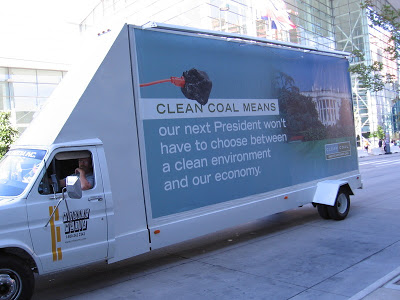 ‘Clean coal’ is in an experimental stage and at best hypothetical
August 26, 2008

DENVER — Greetings from from the Mile High City! It’s a beautiful day here in Denver. The DNC is in full swing, and excitement is in the air…

… and the dirty energy lobbyists are walking the streets. Literally.

For those of you who haven’t heard of them, the American Coalition for Clean Coal Electricity (ACCCE) is a coal industry front group. They’re the ones with the pretty ads on CNN. They even brought you the Democratic debate at the end of January.

They virtually greet Denver visitors with a series of ads at the airport, and they’re rolling around town with their mobile billboard.

We’ve even heard that they’re handing out pieces of “coal”… painted green.

If you’re easily convinced by such silly swag, I have a bridge to sell you.

You see, here’s the background story. When coal industry lobbyists say “clean coal”, they’re mainly talking about carbon capture and storage (CCS), which, in reality, is only in the experimental stages, and a hypothetical success at best:

A study by the Massachusetts Institute of Technology called The Future of Coal, published last year, suggests that the first commercial CCS plants won’t be on stream until 2030 at the earliest. Thomas Kuhn of the Edison Electric Institute, which represents most US power generators, half of whose fuel is coal, takes a similar line. In September [2007], he told a House Select Committee that commercial deployment of CCS for emissions from large coal-burning power stations will require 25 years of R&D and cost about $20 billion.

The most detailed published assessment [pdf], by Peter Viebahn of the German Aerospace Center in Stuttgart, estimates that at best CCS will reduce greenhouse gas emissions from coal-fired power stations by little more than two-thirds. That compares with life-cycle emissions for most renewable energy technologies that are 1 to 4 per cent of those from burning coal.

We are unlikely to give up burning coal any time soon, and CCS could eventually have an important part to play by allowing coal to be used without doing unacceptable damage to the global climate. But that isn’t going to happen tomorrow. And as to the dream of coal becoming a zero-emissions source of power – forget it.

So, it’s fitting that the ACCCE is handing out bits of fictitious fuel. Although we still haven’t scored any, Devilstower and I had a chance to chat with several of the ACCCE representatives.

What we learned in our hour-long interview can, unfortunately, be easily condensed into a few paragraphs. I’ll let Devilstower take over from here.

Thanks, Page. Our interview rambled over several topics, and there’s no doubt that the coal lobbyists are personable guys who know how to make their argument — after all, that’s their job. But when it comes to a few areas, their answers are a lot less than satisfying. (note: while I’ve tagged my bits and those from Page, I’ve lumped all the clean coal lobbyists together as “CC,” not out of disrespect, but because I can’t distinguish their voices on my high quality $9 recorder).

DT: But being closer doesn’t really help the next president protect the environment or the economy.

CC: We never said that. This is not an answer for the very next president.

CC: It’s certainly an issue for whoever is the next president to start working on it.

Page: But you’re saying our next president won’t have to choose between a clean environment and the economy. That’s a huge statement. And very clever.

CC: The issue is simply this. In this country, you could stop using coal tomorrow, but it won’t make a dent in global CO2 and it’ll greatly raise energy prices. You’ll have to build nuclear plants, which will take years, or use natural gas, which would be very costly.

If you stopped using coal tomorrow, this country would shut down.

DT: I don’t think anyone’s proposing that we turn all the plants off overnight, but that existing 51% of our electrical grid that you’re talking about is not “clean coal.” It’s coal, but it’s not clean.

CC: It has to start somewhere.

And that’s where the argument becomes circular. Clean Coal would be a great boon to the country if it existed, but it doesn’t. Clean coal is a hypothetical fuel, something that might be possible, in a decade or two, with the investment of several billion dollars.

So, while the clean coal lobby presses the idea of their fuel as an inexpensive solution to both maintaining a strong economy and protecting the environment, what they’re really pushing is a choice. We can choose to invest our funds in sources of clean electricity that exist right now, today, or we can invest in carbon capture in the hopes that someday, decades from now, it might work. The proposal really ends up having all the downside of investing in fusion (the power source of the future, and always will be) and little of fusion’s upside (low overall environmental impact).

The question we’re left with is how we handle the power sources we have today, the ones that are powered by not-clean-coal. And the clean coal they talk about is one alternative that’s not on the table.

When we got around to talking about the fate of existing plants, we got closer to the real agenda of the clean coal lobby.

CC: Kansas is a prime example. The big story missed in that whole fiasco was that when that plant was cancelled, six wind projects went with it, because the wind developers were going to use the transmission infrastructure from that coal plant.

And that kept the old plants in service, because they can’t take them off line to build a new plant with modern technology. When that got stopped, it insured one thing—that the old plants continued to chug along. They had to to keep the lights on.

Page: So you’re saying that it’s the environmentalists’ fault, basically?

CC: Are we saying it’s anybody’s fault? Absolutely not.

Page: But the Sierra Club’s opposition means that people are going to go without electricity or be stuck with old plants?

CC: There needs to be a give and take. When your policy says “no, not under any circumstances,” that obviously becomes very contentious.

Page: So Kathleen Sebelius was a real inhibitor to any progress? That’s the issue here?

CC: No, not at all, but that’s only one instance. We can pick incidents all over the United States right now where they put up legal challenges.

And now we’re back to another circular argument: we can’t eliminate old coal plants, because there’s opposition to building new coal plants. The assumption here is that only coal can replace coal, and while these new plants are certainly cleaner than those they replace in the sense of lowering many other emissions, they make no effort at carbon capture. None. The proposed new plants are not clean coal plants.

The real goal is to promote the building of new plants, clean or not. What they’re handing out is a perfect example of what they’re doing: plain old coal, with a coat of green paint.