Chavez: ‘When the Working Class Roars, the Capitalists Tremble’ 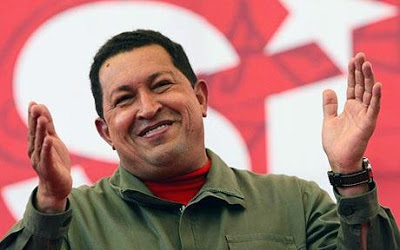 Addressing the 400-strong May 21 workshop with workers from the industrial heartland of Guayana, dedicated to the “socialist transformation of basic industry”, Venezuelan President Hugo Chavez noted with satisfaction the outcomes of discussions: “I can see, sense and feel the roar of the working class.”

“When the working class roars, the capitalists tremble”, he said.

Chavez announced plans to implement a series of radical measures, largely drawn from proposals coming from the workers’ discussion that day.

The workers greeted each of Chavez’s announcements with roars of approval, chanting “This is how you govern!”

Chavez said: “The proposals made have emerged from the depths of the working class. I did not come here to tell you what to do! It is you who are proposing this.”

To the cheers of the workers, Chavez announced the nationalisation of six iron briquette, ceramics and steel companies, one after the other.

He said this started “a process of nationalisations” aimed at creating an integrated basic industry complex as part of building socialism.

Chavez also said it was necessary for there to be workers’ control along “the entire productive chain”. Plans for the industrial complex had to be “nourished with the ideas of the working class”.

Throughout the day, workers from local steel, aluminum and iron companies raised demands for greater worker participation in managing production, more nationalisations, and the need to sack corrupt and counterrevolutionary managers.

The workers were affiliated to the Socialist Workers’ Force (FST), which organises unionists in the United Socialist Party of Venezuela (PSUV — the mass revolutionary party led by Chavez).

Saying this new phase would have to be “assumed with responsibility”, Chavez called on the workers to wage an all-out struggle against the “mafias” rife in the management of state companies.

Chavez said he would approve a new law to allow workers to elect state company managers.

“Every factory should be a school, in order, as Che said, to create not only briquettes and sheets and steel and aluminium, but also, above all, new men and women, a new society, a socialist society”, he said.

Chavez also called for workers to organise an armed militia. Worker battalions in each factory should be equipped with weapons “in case anyone makes the mistake of messing with us”.

These moves are part of a push to deepen the Venezuelan revolution after the February 15 referendum that voted to remove restrictions on the number of terms public officials could stand for election.

At stake was the future of the revolution. Its central leader, Chavez, was unable to stand for re-election in 2012 under pre-existing regulation limiting a president to two terms.

The referendum initiative followed the November regional elections, in which the PSUV won a majority of governorships and mayoralties, yet lost some key states to the right-wing opposition.

The opposition used newly won offices to launch an assault on grassroots organisations and the government’s pro-poor social programs.

The referendum was part of a counter-offensive to strengthen the organisation of the revolutionary forces and win another mandate for the revolution’s radical program.

As part of the campaign, around 100,000 “Yes committees” were organised in factories and communities across the country. The “Yes” campaign, which won nearly 55% or 6.3 million votes, was a decisive mandate to deepen the revolution.

The campaign raised the level of organisation among the revolution’s base — workers, students, peasants, the urban poor and other sectors.

After the referendum, Chavez called for the restructuring of the PSUV. The Yes committees were to be converted into “socialist committees” as grassroots units of the party.

Special emphasis was put on strengthening the social fronts.

In early May, Chavez reshuffled the PSUV regional vice-presidents, appointing those seen as his closest collaborators.

With this momentum, the government gave clear signals of how it intended to fight the global economic crisis and falling oil prices.

Rather than a pact with the capitalist class, as some within the revolutionary movement had called for, Chavez launched an offensive — with state intervention into, and in some cases expropriation of, capitalist firms.

This followed previous nationalisations in oil, steel, telecommunications, electricity, and other industries. This is part of ensuring state ownership over strategic sectors of the economy, to direct such sectors towards social needs.

Rice-producing factories owned by Polar, Venezuela’s largest company, were temporarily taken over by the military in February after it was found the company was deliberately evading government-imposed price controls.

Under Venezuelan law, food companies are obliged to direct 70% of production towards selected products at a set price. This is to ensure enough affordable food is available to the poor.

INTI said it would review tens of thousands more hectares as part of its drive to ensure fertile land is directed towards food production for social needs, rather than corporate profits.

On May 7, the National Assembly passed a law ensuring state control over a range of activities connected to the oil industry, previously run by multinationals.

The next day, “the government expropriated 300 boats, 30 barges, 39 terminals and docks, 5 dams and 13 workshops on Lake Maracaibo, where there are large crude oil reserves”, a May 9 Venezuelanalysis.com article said.

On May 20, it nationalised a gas compression plant in the eastern state of Monagas under the same law.

Five days before, the government took over a pasta processing plant owned by US multinational Cargill after government inspectors found it was not producing price-regulated pasta as required.

Food vice minister Rafael Coronado said that after the 90-day intervention period, inspectors “together with the workers, the communal councils” would decide what to do with the company.

On April 30, announcing plans to expropriate the La Gaviota sardine processing plant, Chavez told a gathering of workers that “wherever you see a private company, a capitalist company that is exploiting the workers and is not complying with the laws, that is hoarding, denounce it, because the government is willing to intervene”.

La Gaviota had been shut for two and a half months by workers’ protests demanding the boss comply with the collective contract.

The same day, the government and workers took over the Cariaco sugar processing plant, the scene of similar protests.

Some of the companies Chavez said would be nationalised on May 21 have also faced industrial disputes.

Chavez had previously threatened to nationalise Ceramicas Carabobo if the bosses refused to come to an agreement with the workforce. Workers at Matesi had called for the company be nationalised due to the unwillingness of management to sign a fair collective contract.

Matesi and Tavsa were part of the previously state-owned steel production complex, Sidor, before being sold off separately in the 1990s to Techint, an Argentine company.

After a 15-month dispute over the signing of a collective contract, the government nationalised Sidor, which was majority owned by Techint, decrying the “colonialist mentality” of the bosses overseeing super-exploitative conditions.

This increase in industrial militancy has resulted in a number of factory occupations. This includes the Tachira-based coffee processing plant Cafea, which was closed by its bosses.

Its workforce, together with unions and the local community, have occupied the plant and are demanding it be nationalised.

2 Responses to Chavez: ‘When the Working Class Roars, the Capitalists Tremble’