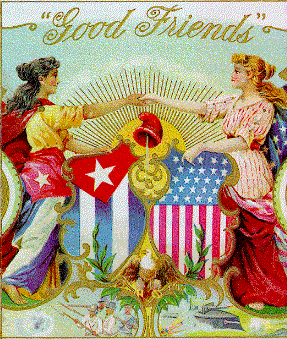 Graphic circa 1902.
U.S. and Cuba to restart negotiations without preconditions.

The fact is that Cuba does not pose any danger to the United States. A continuation of the embargo and failure to normalize relations, does nothing to protect the United States. All it does is hurt both countries economically, and make the U.S. look foolish…

It looks like the United States and Cuba are about to take the first small feeble steps toward normalizing the relationship between the two countries. This is a good thing, and should have happened years ago.

Recently, the United States had asked Cuba to resume negotiations regarding the immigration of Cubans to the United States. Last weekend, Cuba sent a diplomatic note to the U.S. government accepting the invitation to restart the talks. I hope these talks are successful, so other negotiations can be conducted and relations finally normalized.

One reason these talks are going to happen, is that neither country put any preconditions on holding the talks. This should be a lesson to both countries, especially the United States. The U.S. is still requiring preconditions before having more substantial talks and before re-admitting Cuba to the Organization of American States.

The whole idea of preconditions for talks is ridiculous. First, no country has the right to demand another country alter their government. We would be aghast if Cuba demanded we alter our way of governing ourselves before they would talk to us, and yet we seem to think it’s fine for us to do the same thing to them. How can we possibly believe we have the right to do something we would not allow Cuba to do to us?

But not only are the preconditions wrong, they will probably soon put the U.S. in an unsustainable and untenable position. The Organization of American States is scheduled to meet very soon, and the feeling is that the huge majority of the members are in favor of re-admitting Cuba. They may well do so in spite of what the United States wants, or whatever preconditions the United States has imposed.

True diplomacy requires both countries to negotiate in good faith. The differences between the two countries are the matters to be negotiated. To demand for one country to submit to the wishes of another before negotiating is not diplomacy — it is hubris, or worse.

The fact is that Cuba does not pose any danger to the United States. A continuation of the embargo and failure to normalize relations, does nothing to protect the United States. All it does is hurt both countries economically, and make the U.S. look foolish — especially since most other countries, including our allies, have resumed normal relations with Cuba.

It is time for President Obama to drop all preconditions to negotiating the normalizing of relations with Cuba. There is no reason the United States and Cuba cannot be friends, who work together for the common good of both countries.