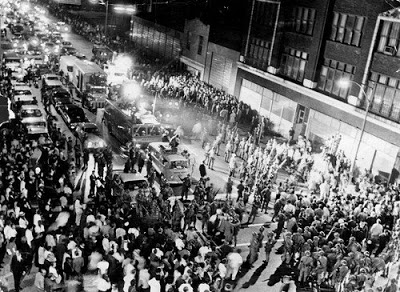 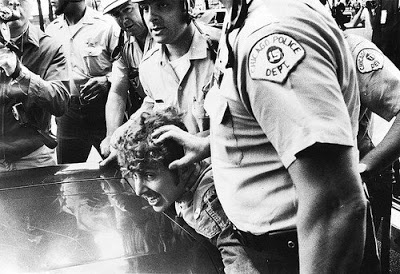 Scenes from the police riots at the 1968 Democratic National Convention in Chicago. Photos from Chicago Tribune files.
1968 Chicago riot cops to hold reunion

‘It’s just a get-together for guys who worked together 40 years ago,’ said Mark Donahue, president of the Fraternal Order of Police. ‘Nothing more.’

The violent clashes between police and protesters during the 1968 Democratic National Convention aren’t typically considered proud moments in Chicago history.

But some members of the Fraternal Order of Police want to change that. On June 26, the Chicago police union will hold a “Chicago Riot Cops Reunion” at its hall to set straight “what really happened,” according to the reunion’s Web site.

“The only thing that stood between Marxist street thugs and public order was a thin blue line of dedicated, tough Chicago police officers,” the Web site says. “Chicago police officers who participated in the riots continue to endure unending criticism — all of which is unwarranted, inaccurate and wrong.”

Former Police Supt. Philip Cline is scheduled to be a keynote speaker.

Proceeds from the reunion will go to the Chicago Police Memorial Fund, which provides assistance to the families of officers killed or catastrophically injured in the line of duty.

Predictably, a protest to counter the event is being planned. Chicago Copwatch, a watchdog group, is organizing a march to the FOP hall the same night after a rally at Union Park at Ashland Avenue and Lake Street.

Their members’ memories of what happened during the convention are quite different, of course. They call it “one of the largest mass beatings in Chicago history.”

But Mark Donahue, president of the FOP, insists the union is not trying to make a statement.

“It’s just a get-together for guys who worked together 40 years ago,” he said. “Nothing more.”