Cholera in Iraq: A Result of Government Corruption 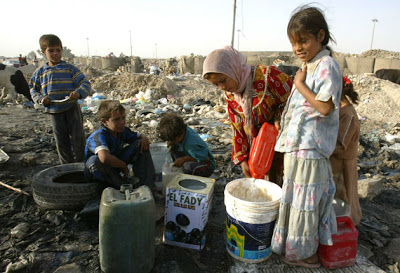 BAGHDAD — A deadly outbreak of cholera in Iraq is being blamed on a scandal involving corrupt officials who failed to sterilise the local drinking water because they were bribed to buy chlorine from Iran that was long past its expiration date.

The centre of the epidemic is in Babil province, south of Baghdad, in the marshy lands east of the Euphrates river, not far from the ruins of ancient Babylon. In Baghdad, where half the six million population has no access to clean drinking water, people are now drinking only bottled or boiled water.

The Iraqi Prime Minister, Nouri al-Maliki, has appointed a commission of inquiry to find out why ineffective chlorine was being used. He is also refusing to release three officials under arrest despite demands from the Islamic Supreme Council of Iraq (ISCI) to which they are linked. In the town of al-Madhatiya, in southern Babil, a councillor involved in buying the chlorine was reportedly released after militiamen connected to ISCI intimidated police into freeing him.

The scandal over the contract is becoming a test case of the Maliki government’s willingness to tackle the pervasive corruption in Iraq where officials see their jobs primarily as a way of enriching themselves through bribes. It is also a test of his ability to exercise central control over ISCI and parties which have been hitherto dominant outside Baghdad.

Cholera is endemic in Iraq but last year there was an epidemic in northern Iraq which was far more serious than anything seen for years. Some 4,700 people, mostly in Sulaimaniyah province, were struck.

This year, the government hoped to stop another outbreak of the disease by repairing shattered water and sanitation stations and putting chlorine in the water supply. An Iraqi government official, who did not want his name published, said the Health Ministry bought $11m (£6.4m) worth of chlorine from Iran for use in the provinces of Babil, Diwaniyah and Kerbala, all on the Euphrates river south of Baghdad.

In the latter two provinces, officials noticed that the chlorine was old and the time during which it could be employed effectively had expired, and refused to use it. But in Babil the chlorine was put in the fresh water supply stations at al-Madhatiyah, al-Hashimiyah and al-Qasim, south-east of the provincial capital, al-Hillah. Soon 222 people were confirmed as having cholera in Babil, in a total of 420 cases of whom seven have died.

The scandal is a reflection of the the way Iraqi politics works. The ruling parties monopolise jobs and contracts. It is impossible to find work at any level in most ministries without a letter of commendation from one of the parties in the government. The enormous Iraqi government apparatus, employing some two million people, is a patronage machine. There are now more state officials than under Saddam, but it is unable to supply electricity, food rations and clean water, despite Iraq’s $80bn in accumulated oil revenues.

The power base of ISCI, the most powerful Shia religious party, is the Shia provinces of southern Iraq between Baghdad and Basra. Political parties are expected to protect their members from arrest. This explains what happened next. The officials arrested in Babil belonged to the Badr Organisation, the militia wing of ISCI. Leaders of the party demanded their release but Mr Maliki refused. Badr militants then turned up at a police station in al-Madhatiya and forced the police to release a councillor apparently involved in purchasing the chlorine.

But the grand Shia coalition which won more than half the seats in the Iraqi parliament in the last election in December 2005 has broken up. Mr Maliki is trying to build up his own Dawa party, using the resources of the state.

He has deepening differences with ISCI which won most of the southern Iraqi provinces. They accuse him of trying to create a power base in what was previously their territory by paying the tribes who belong to government-sponsored “support councils” in southern Iraq. His aim is to get his own candidates elected in the provincial and parliamentary elections next year. “These will be crucial in deciding who will hold power in Iraq in future,” said one senior Iraqi official.

Control of oil revenues gives Mr Maliki a crucial card. Iraq has 50 to 60 per cent unemployment and most jobs are with the state. Salaries of state employees have risen sharply. But the government remains largely dysfunctional aside from its growing military strength. Iraqi journalists are encouraged and paid to write “good news” stories. In Baghdad, people notice there is little mention of the cholera in the media. This provokes fear that the epidemic may be worse than the government admits.

After the invasion: Services in Iraq

* Before the war, Baghdad had electricity between 16 and 24 hours a day. This has dropped to just under 12.

* There was no national mobile phone network, now there are at least 12 million subscribers.