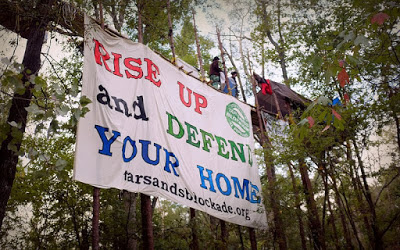 Ranchers, farmers, and enraged citizens, often after seeing their land seized by eminent domain and their water supplies placed under mortal threat, have united with Occupiers and activists to oppose the building of the Keystone XL tar sand pipeline.

The next great battle of the Occupy movement may not take place in city parks and plazas, where the security and surveillance state is blocking protesters from setting up urban encampments. Instead it could arise in the nation’s heartland, where some ranchers, farmers, and enraged citizens, often after seeing their land seized by eminent domain and their water supplies placed under mortal threat, have united with Occupiers and activists to oppose the building of the Keystone XL tar sand pipeline.

They have formed an unusual coalition called Tar Sands Blockade (TSB). Centers of resistance being set up in Texas and Oklahoma and on tribal lands along the proposed route of this six-state, 1,700-mile proposed pipeline are fast becoming flashpoints in the war of attrition we have begun against the corporate state. Join them.

The XL pipeline, which would cost $7 billion and whose southern portion is under construction and slated for completion next year, is the most potent symbol of the dying order. If completed, it will pump 1.1 million barrels a day of unrefined tar sand fluid from tar sand mine fields in Canada to the Texas Gulf Coast.

Tar sand oil is not conventional crude oil. It is a synthetic slurry that, because tar sand oil is solid in its natural state, must be laced with a deadly brew of toxic chemicals and gas condensates to get it to flow. Tar sands are boiled and diluted with these chemicals before being blasted down a pipeline at high pressure. Water sources would be instantly contaminated if there was a rupture.

The pipeline would cross nearly 2,000 U.S. waterways, including the Ogallala Aquifer, source of one-third of the United States’ farmland irrigation water. And it is not a matter of if, but when, it would spill. TransCanada’s Keystone I pipeline, built in 2010, leaked 12 times in its first 12 months of operation. Because the extraction process emits such a large quantity of greenhouse gases, the pipeline has been called the fuse to the largest carbon bomb on the planet.

The climate scientist James Hansen warns that successful completion of the pipeline, along with the exploitation of Canadian tar sands it would facilitate, would mean “game over for the climate.”

Keystone XL is part of the final phase of extreme exploitation by the corporate state. The corporations intend to squeeze the last vestiges of profit from an ecosystem careening toward collapse. Most of the oil that can be reached through drilling from traditional rigs is depleted. The fossil fuel industry has, in response, developed new technologies to go after dirtier, less efficient forms of energy.

These technologies bring with them a dramatically heightened cost to ecosystems. They accelerate the warming of the planet. And they contaminate vital water sources. Deep-water Arctic drilling, tar sand extraction, hydraulic fracturing (or hydro-fracking) and drilling horizontally, given the cost of extraction and effects on the environment, are a form of ecological suicide.

Appealing to the corporate state, or trusting the leaders of either party to halt the assault after the election, is futile. We must immediately obstruct this pipeline or accept our surrender to forces that, in the name of profit, intend to cash in on the death throes of the planet.

Nine protesters, surviving on canned food and bottled water, have been carrying out a tree-sit for more than two weeks to block the path of the pipeline near Winnsboro, Texas. Other Occupiers have chained themselves to logging equipment, locked themselves in trucks carrying pipe to construction sites and hung banners at equipment staging areas.

Doug Grant, a former Exxon employee, was arrested outside Winnsboro when he bound himself to clear-cutting machinery. Shannon Bebe and Benjamin Franklin, after handcuffing themselves to equipment being used to cut down trees, were tasered, pepper-sprayed, and physically assaulted by local police, reportedly at the request of TransCanada officials. 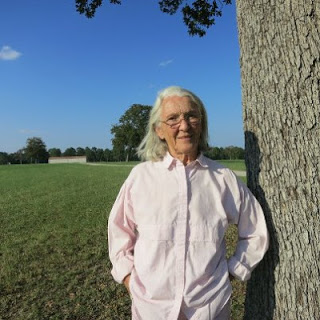 At the same time, private security companies employed by TransCanada, along with local law enforcement, have been aggressively detaining and restricting reporters, including a New York Times reporter and photographer, who are attempting to cover the protests. Most of the journalists have been on private property with the permission of the landowners.

I reached climate activist Tom Weis nearly 1,000 miles from the blockade, in the presidential battleground state of Colorado, by phone Friday. Weis is pedaling up and down the Front Range, hand-delivering copies of an open letter — signed by citizens, some of whom, like Daryl Hannah, have been arrested trying to block the XL pipeline — to Obama and Romney campaign offices. He has been joined by indigenous leaders, including Vice President of Oglala Lakota Nation Tom Poor Bear, and in Denver by members of the Occupy Denver community.

Weis last fall rode his bright-yellow “rocket trike” — a recumbent tricycle wrapped in a lightweight aerodynamic shell — 2,150 miles along the proposed Keystone XL pipeline route. He was accompanied by Ron Seifert, now a spokesperson for the Tar Sands Blockade. Weis’ “Keystone XL Tour of Resistance” started at the U.S.-Canada border in Montana and ended 10 weeks later at the Texas Gulf Coast. He recently produced a 15-minute video in which he interviewed farmers, ranchers, and indigenous leaders who live in the path of the project.

“Keystone XL is being built as an export pipeline for Canada to sell its dirty oil to foreign markets,” he said. “This is not about energy security; it’s about securing TransCanada’s profits.”

Weis cited a report commissioned by Cornell University that concluded that the jobs estimates put forward by TransCanada were unsubstantiated and that the project could actually destroy more jobs than it created.

Barack Obama delayed, until after the election, a decision on permitting the northern leg of the pipeline after a series of civil disobedience actions led by Bill McKibben’s 350.org in front of the White House a year ago, as well as fierce opposition from ranchers in states such as Nebraska. The president, by announcing the delay, put an end to the widespread protests.

Obama, however, flew to Cushing, Okla., in March to call for the southern leg of the pipeline to be fast-tracked. Standing in a pipeline yard, he said, “I’m directing my administration to cut through the red tape, break through the bureaucratic hurdles, and make this project a priority, to go ahead and get it done.”

Obama’s rival for the presidency, Mitt Romney, was no less effusive in his support for Keystone XL, saying to a Pittsburgh audience in May: “If I’m president, we’ll build it if I have to build it myself.”

Grassroots organizing along the proposed pipeline has grown, especially as the project began to be put in place.

If completed, the 485-mile southern leg, from Cushing to Nederland, Texas, would slice through major waterways including the Neches, Red, Angelina, and Sabine rivers as well as the Carrizo-Wilcox Aquifer, which provides drinking water for some 10 million Texans. The southern section of the pipeline is now the focus of the Tar Sands Blockade.

The invasive extraction of tar sands and shale deposits, as well as deep-sea drilling in the Arctic, Alaska, the Eastern Seaboard, and the Gulf of Mexico, has been sold to the U.S. public as a route to energy independence, a way to create millions of new jobs, and a boost to the sagging economy, but this is another corporate lie.

The process of extracting shale oil through hydraulic fracking, for example, requires millions of gallons of chemically treated water that leaves behind poisoned aquifers and huge impoundment ponds of toxic waste. The process of extracting oil shale, or kerogen, requires it to be melted, meaning that tremendous amounts of energy are required for a marginal return. The process of tar sand extraction requires vast open pit mining operations or pumping underground that melts the oil with steam jets.

Tar sand extraction also releases significantly more greenhouse gas emissions than conventional oil drilling, meaning an acceleration of global warming. Drilling in the Arctic, with its severe weather, costs as much as half a billion dollars per well. 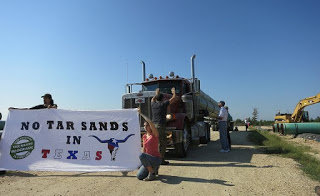 Tar sands protesters block TransCanada truck on August 29, 2012, in Livingston, Texas. Image from In These Times.
These processes are part of a desperate effort by corporations to make profits before a final systems collapse. Droughts are already sweeping the Midwest. The battle between farmers and fossil fuel corporations for diminishing water sources has begun. Yet our ruling elite refuses to face the stark reality of climate change. They ignore the imperative to find other ways of structuring our economies and our relationship to the environment. They myopically serve a doomed system. And, if left unstopped, the cost for all of us will be catastrophic.

Weis, a former congressional staffer, expects the last section of the pipeline to be authorized by the president once the election is over.

“It is critical that people understand that completion of the southern leg of Keystone XL — which President Obama and Gov. Romney both fully support — would give TransCanada a direct line from Alberta’s landlocked tar sands mine fields to refineries in Texas for export overseas,” Weis explained. “By tapping into Keystone I, which has already been built, the southern leg of Keystone XL would open the floodgates to tar sands exploitation in Canada. At a time when the climate is already dangerously destabilizing before our eyes, I can’t believe we’re even having this conversation.”

He described Obama’s and Romney’s “failure to stand up to this corporate bully” as a “failure to defend America.”

“It is unconscionable to put the interests of a transnational corporation before the health, safety, and economic well-being of the American people,” he said.

Weis sees the struggle to halt the Keystone XL pipeline as a symbolic crossroads for the country and the planet. One path leads, he said, toward decay. The other toward renewal.

[Chris Hedges, a columnist for Truthdig, spent nearly two decades as a foreign correspondent in Central America, the Middle East, Africa, and the Balkans. He has reported from more than 50 countries and has worked for The Christian Science Monitor, National Public Radio, The Dallas Morning News, and The New York Times, for which he was a foreign correspondent for 15 years.]