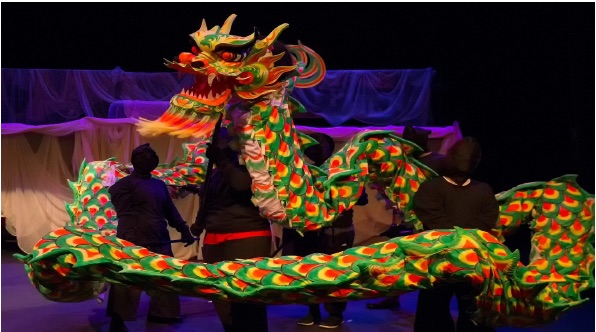 AUSTIN — Lucky Chaos is inviting the public to Our House: A Festival of Arts, Diversity & Community on Sunday, April 8, 2018, from 2-5 p.m., at the Motion Media Arts Center, 2200 Tillery in Austin.

The highlight of the arts and cultural festival is the rarely performed “Dian Jing,” an “eye-dotting” awakening ceremony for the group’s 20-foot Chinese dragon.

In accordance with the Chinese dragon and lion tradition, this awakening ceremony will be performed by a group of VIPs,
including leaders from the city’s government, business sector, and community.

Lion Dancer Norman Tran describes the ceremony: “The Chinese lion and dragon dances have been a tradition in China for more than a thousand years. The Dian Jing ‘eye-dotting’ ceremony awakens the spirit of the lion and dragon from the heavens and transmits life force and power.”

There will also be performances by the lions, street performance, and African martial arts. This is a free, family friendly interactive event.

Lucky Chaos has been active in Austin since 2012. The group produces creative works by Asian-American and other under-represented voices. They work to increase dialogue through live performances, film and digital content, and an education program.

The Lucky Chaos program areas, Mental Health, Live Theater, Digital Content and Workshops, will include fun and interactive activities. There will be multiple performances, including a Lion Dance and a performance by Sefe Dekote, a local non-profit researching and continuing traditional African martial arts. This will also be the debut of the new graphic novel, 8Tribes, inspired by Austin and its residents!