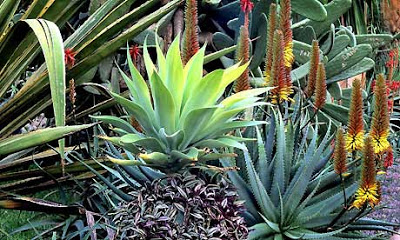 Drought-resistant plants such as these in the Majorelle gardens in Marrakech, Morocco, would become more common in British gardens. Photo by Clay Perry / Corbis.
‘We need strategy to adapt to potential catastrophic increase’
By James Randerson / August 7, 2008

Great Britain (UK) should take active steps to prepare for dangerous climate change of perhaps 4C according to one of the government’s chief scientific advisers.

In policy areas such as flood protection, agriculture and coastal erosion Professor Bob Watson said the country should plan for the effects of a 4C global average rise on pre-industrial levels. The EU is committed to limiting emissions globally so that temperatures do not rise more than 2C.

“There is no doubt that we should aim to limit changes in the global mean surface temperature to 2C above pre-industrial,” Watson, the chief scientific adviser to the Department for the Environment, Food and Rural Affairs, told the Guardian. “But given this is an ambitious target, and we don’t know in detail how to limit greenhouse gas emissions to realise a 2 degree target, we should be prepared to adapt to 4C.”

According to the government’s 2006 Stern review on the economics of climate change, between 7 million and 300 million more people would be affected by coastal flooding each year, there would be a 30-50% reduction in water availability in Southern Africa and the Mediterranean, agricultural yields would decline 15 to 35% in Africa and 20 to 50% of animal and plant species would face extinction.

In the UK, the most significant impact would be rising sea levels and inland flooding. Climate modellers also predict there would be an increase in heavy rainfall events in winter and drier summers.

Watson’s plea to prepare for the worst was backed up by the government’s former chief scientific adviser, Sir David King. He said that even with a comprehensive global deal to keep carbon dioxide levels in the atmosphere at below 450 parts per million there is a 50% probability that temperatures would exceed 2C and a 20% probability they would exceed 3.5C.

“So even if we get the best possible global agreement to reduce greenhouse gasses on any rational basis you should be preparing for a 20% risk so I think Bob Watson is quite right to put up the figure of 4 degrees,” he said.

One big unknown is the stage at which dangerous tipping points would be reached that lead to further warming – for example the release of methane hydrate deposits in the Arctic. “My own feeling is that if we get to a 4 degree rise it is quite possible that we would begin to see a runaway increase,” said King.

He said a two-and-half-year analysis by the government’s Foresight programme on the implications for coastal defences had more impact in the corridors of power than any other research on the effects of climate change that he presented.

“No other single factor focussed the minds of the cabinet more than the analysis that I produced through that … We begin to have to talk about ordered retreat from some areas of Britain because it becomes impossible to defend,” he said. “There’s no choice here between adaptation and mitigation, we have to do both.”

Other experts were concerned that Watson’s comments might be seen as defeatist and an admission that emissions reductions were impossible to achieve.

“At 4 degrees we are basically into a different climate regime,” said Prof Neil Adger, an expert on adaptation to climate change at the Tyndall Centre for Climate Change Research in Norwich.

“I think that is a dangerous mindset to be in. Thinking through the implications of 4 degrees of warming shows that the impacts are so significant that the only real adaptation strategy is to avoid that at all cost because of the pain and suffering that is going to cost.

“There is no science on how we are going to adapt to 4 degrees warming. It is actually pretty alarming,” he added.

Speaking to the Guardian, Watson, who is a former science adviser to President Clinton and ex-chief scientist at the World Bank, said the UK should take a lead in research on carbon capture and storage (CCS).

Alluding to the US effort in the 1960s to put a man on the moon he advocated an “Apollo-type programme” to introduce 10 to 20 CCS pilot projects – which work by burying carbon dioxide from burning fossil fuels underground – among OECD countries to develop the technology.

“This would allow coal-fired power plants that are currently being built to be modular and capable of having carbon capture retrofitted, and would show the world that we take the issue of climate change seriously, thus demonstrating real leadership. Without this technology we have a real problem.”

He also said as coal burning is cleaned up to remove harmful sulphur pollution climate change would actually get worse. The sulphur aerosols are actually preventing some warming from taking place currently.

“This offsetting effect, which is equivalent to about 100 parts per million of carbon dioxide, will largely disappear if China and India follow the lead of the US and Europe in limiting sulphur emissions, the cause of acid deposition,” he said.