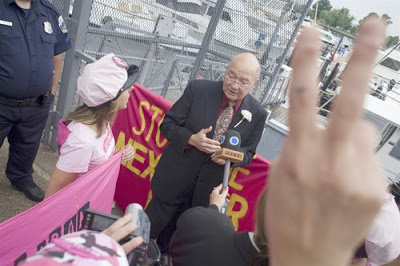 Members of Code Pink protested Rep. Gary Ackerman’s (D-NY) house boat with a canoe blockade Wednesday morning. Ackerman embraced the protesters, calling it the most creative protest he had ever seen and engaged in a lengthy discussion with them about the Iran sanctions proposed in Congress. Photo by Michael Temchine / Newsday / July 9, 2008.
Protesters blockade Rep. Ackerman’s houseboat
BY Janie Lorber / July 9, 2008

WASHINGTON – Rep. Gary Ackerman might be the only member of Congress who really knows what a naval blockade feels like — thanks to peace activists who early Wednesday morning gathered around his Potomac River houseboat with a naval blockade of their own.

It wasn’t much, a mini-flotilla of three canoes and an inflatable raft — not even enough to surround Ackerman’s aquatic home. But the 15 activists from Code Pink wanted to encourage Ackerman (D-Jamaica Estates) to tone down his rhetoric against Iran.

After enduring nearly 30 minutes of sirens, whistles, drumbeats and megaphone chanting, Ackerman — wearing his trademark carnation in his lapel and a floral tie — emerged with a kiss and a hug for the ringleader.

But he said he would go ahead with a resolution calling for stiffer sanctions against Iran.

The Ackerman measure Code Pink wants Ackerman to withdraw the legislation because it believes it symbolizes the first step on a path to war. The group wants direct talks with Iran’s government instead.

“This House resolution — they claim that it’s a diplomatic measure and we say its not. It’s a very provocative measure,” said Desiree Fairooz, who received national attention for trying to smear fake blood on Secretary of State Condoleezza Rice during a congressional hearing last year.

Ackerman, whose district covers part of Nassau County, said he would be willing to meet with any Iranian government official without pre-conditions, including President Mahmoud Ahmadinejad, but would not retreat from his legislation.

“This is not an embargo,” Ackerman told the protestors. “We’re not calling for a blockade. It is basically what the UN is doing. The UN has imposed sanctions on Iran.”

The legislation asks President George W. Bush to “increase economic, political and diplomatic pressure on Iran.” But as a nonbinding resolution, it will never be presented to the president for signature and does not have the force of law.

Thanks to Jeff Webster and Susan Van Haitsma / The Rag Blog