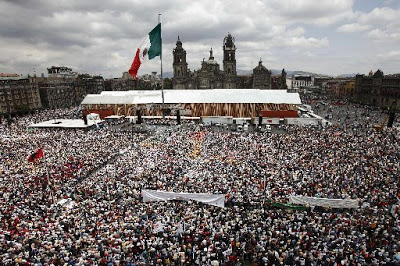 MEXICO CITY — Proposals to privatize Mexico’s state-owned oil industry have sparked a powerful movement in the streets, led by a leftist political leader who narrowly lost the 2006 presidential election.

The National Movement in Defense of Oil (Movimiento Nacional en Defensa del Petróleo or MNDP), headed by former presidential candidate Andrés Manuel López Obrador, formally presented a resolution to the Mexican Congress on June 3. It calls on the Congress to organize a Nationwide Referendum to let the people vote on the six privatization planks in the energy “reform” plan initiated by Mexican President Felipe Calderón.

The conservative majority in Mexico’s Congress has refused to approve such a referendum, saying it would be unconstitutional. Ironically, Mexico was the first Latin American nation to nationalize its oil reserves in 1938, and is now moving to loosen state control of the industry just as oil prices are hitting record highs. The privatization plan is also being pushed at a time when other Latin American nations, such as Venezuela, Bolivia and Ecuador, are moving to assert greater state control over their own oil resources.

Lopéz Obrador officially lost the 2006 presidential election by 0.2 percent of the vote, amid widespread allegations of fraud by Calderón’s ruling conservative party.

Critics have accused the promoters of the national referendum — and López Obrador in particular — of “fomenting instability, violence and chaos” across Mexico. In addition, both Calderón and Jesus Reyes Heroles, the director of Pemex, Mexico’s state-owned oil corporation, have insisted that a referendum is out of the question, as their reform plan is too complicated for the Mexican people to be able to understand. Such accusations have not prevented defenders of Mexico’s oil resources from moving forward.

In early June, a wing of López Obrador supporters in the leftist Party of the Democratic Revolution (PRD), all mayors, announced that in their cities and villages, they will convene referendums on the national energy reform plan. Marcelo Ebrard, the mayor of Mexico City (which holds about 10 percent of the country’s population and is its nerve center), announced that he would convene a referendum July 27.

Ebrard’s announcement was met with protests by top-level Calderón government officials, who warned Ebrard not to go ahead with the referendum, hinting that he might face impeachment proceedings.

López Obrador has since announced that — no matter what is decided in the Congress or what happens with the municipalities where local referendums are already being organized — the MNDP will hold a national referendum Aug. 7 in the country’s remaining 2,500 electoral districts. “The people are sovereign, the people must decide,” López Obrador said.

An outdoor assembly of the MNDP will be held in Mexico City June 27 and plans for organizing the Aug. 7 nationwide referendum will soon be announced.

The move toward an unauthorized national plebiscite follows months of agitation and organizing by López Obrador and his forces. In April, López Obrador’s congressional allies occupied the legislative chambers for 18 days while tens of thousands of mostly female oil defense “brigadistas” rallied in the streets outside. These efforts stalled Calderón’s initial attempt to rush the privatization plan into law and forced a national discussion.

Ten debates have followed in Congress and López Obrador’s forces have demolished Calderón’s supporters. Although the debates have only been covered on pay-per-view TV stations, privatization opponents have made videos available on YouTube and are selling inexpensive DVDs all across Mexico. They are also distributing a popular comic book by the well-known cartoonist El Fisgón, which explains the privatization plan simply and clearly.

Read all of it here. / Upside Down World

This entry was posted in RagBlog and tagged Capitalism, Latin America, Oil Companies. Bookmark the permalink.