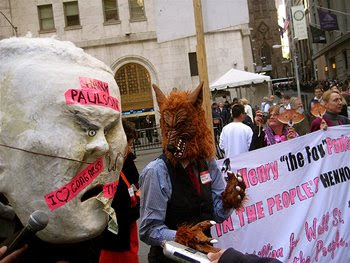 Should Henry ‘The Fox’ Paulson Guard the Henhouse?
By Medea Benjamin / October 9, 2008

On Tuesday, October 7, a group of CODEPINK pranksters pranced in front of the New York Stock Exchange. One, wearing an oversized papier maché head of Treasury Secretary Henry Paulson, grabbed at the purses of the “chickens.” “Give me your money; give me your money,” he cried. “You might need a new house, but my buddies and I need new yachts.” Passersby, reading the sign “Henry ‘The Fox’ Paulson’ in the People’s Henhouse,” heartily agreed.

Congress thought otherwise, entrusting Paulson — the former CEO of Goldman Sachs — with $700 billion of the people’s money. On October 3, Speaker Nancy Pelosi, smiling ear to ear, congratulated Congress for passing a bill that gave Secretary Paulson unprecedented control over our nation’s economic future. An hour later, President Bush and Secretary Paulson appeared on the steps of the Treasury Department signing the bill.

“This bailout bill does not deal with the absurdity of the fox guarding the henhouse,” Senator Bernie Sanders decried on the Senate floor. But during the post-bailout hearings held by the House Oversight Committee, Congressman Dennis Kucinich was the lone voice raising questions about Paulson’s performance and his obvious conflict of interest.

Kucinich asked the witnesses from AIG and Lehman Brothers why one company — AIG — was bailed out by the Treasury Secretary while Lehman Brothers was allowed to go under. AIG owed Goldman Sachs $20 billion, so their bailout meant that Paulson’s buddies at Goldman Sachs would get repaid in full. Goldman Sachs also gained a competitive advantage from the bankruptcy of its rival Lehman Brothers. One would think that this maneuver alone, which happened BEFORE the $700 billion taxpayer bailout, would have immediately raised hackles in Congress and disqualified Paulson as economic czar.

To see the absurdity of Paulson in charge of the crisis, Congress need only have looked at Paulson’s past. On the very day that Congress passed the bailout, The New York Times published a shocking story about how the SEC was lobbied in 2004 by the nation’s five largest investment banks to change a regulation that limited the amount of debt they could take on. The exemption unshackled billions of dollars held in reserve as a cushion against losses on their investments, and led to the unraveling of the financial sector. Among the five banks leading the charge to change the rule was Goldman Sachs, which was headed by Henry Paulson. Translation: Paulson was one of the architects of the crisis!

Paulson also benefited personally from the casino economy he helped engineer. After creating billions of dollars in bizarre financial products that are now nearly worthless, he left Goldman Sachs with a personal fortune of over $700 million.

“It is remarkable that Congress would be willing to give Secretary Paulson such enormous power in running this bailout given his advocacy of rule changes that played such an important role in this financial disaster, and the extent to which he personally profited from these changes,” said Dean Baker, an economist who was one of the first in the country to sound the alarm that the housing bubble was about to burst. “This would be like giving the bank robber who cleaned out the vaults the opportunity to set the bank’s finances in order — and letting him keep the loot.”

Paulson’s job performance as Treasury Secretary since July 2006 should be enough to have him fired, as Paulson fiddled while our economy slowly burned. When sub-prime mortgage losses set off a domino effect in mid-2007, Paulson insisted that troubles in the mortgage market were not likely to spread throughout the economy. In a Jim Lehrer interview in May 2007, he stated, “We’re fortunate that we have a diverse, healthy economy” and insisted the housing problem was contained. A year later, he told the Wall Street Journal, “The worst is likely to be behind us,” and stated on CNBC: “Our long-term fundamentals in this economy are strong, and this is a strong, competitive economy.” As Cong. DeFazio stated, “This guy has been consistently wrong and out of touch or he’s been lying to Congress and the American people about how sound our fundamentals are.”

When in September we found ourselves in the midst of a full-blown crisis, Paulson’s response was to blackmail Congress. With the proverbial gun to their heads, members of Congress were asked to hand Paulson $700 billion — immediately — on the basis of a three-page proposal and with no oversight, no Congressional or Judicial review and no accountability! Where did that $700 billion figure come from? “It’s not based on any particular data point,” a Treasury spokeswoman told Forbes.com. “We just wanted to choose a really large number.” Cong. Brad Sherman called Paulson’s proposed legislation an “awe-striking, mind-boggling power grab” designed with only Wall Street in mind.

Instead of tossing out Paulson and his plan in favor of a solution for Main Street, Congress passed a bill giving Paulson enormous power to decide which companies will be bailed out and which will go under. “A plan that relies on the former chairman of Goldman Sachs disbursing hundreds of billions of dollars to Wall Street is a terrible concept and inevitably will lead to crony capitalism and the appearance of — if not the actual existence of — corruption,” said Newt Gingrich, who called on President Bush to fire Paulson.

The people’s ire over the Wall Street bailout almost derailed the entire plan, but the bankers prevailed. Paulson’s plan, however, has not calmed the markets and shouldn’t mute the public outcry. Join us in demanding that the Fox stop raiding the henhouse. Join us in insisting that Paulson must go! (go to www.paulsonmustgo.com).

This entry was posted in RagBlog and tagged Agitprop, Bank Bailouts, Banking, CodePink. Bookmark the permalink.