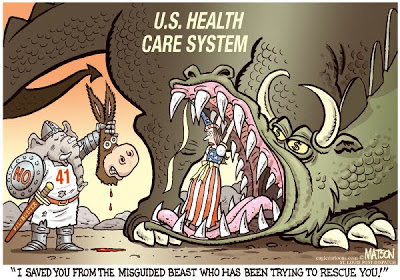 Cartoon by Matson / St. Louis Post-Dispatch / The Moderate Voice.
Good riddance to Senate bill;
Some encouraging words from the President

The word emanating from Washington regarding health care has become a mere trickle since the President’s State of The Union address. It would appear that Mr. Obama is making an effort to reestablish some of his rapport with his progressive base in an effort to offset much of the Democrat Party’s lethargy and Rahm Emanuel’s attack on the progressives in which he called them “F—ing retarded.” (Perhaps Rahm had best be set adrift and allowed to take his proper place as an adviser to the Likud Party.)

Mr. Obama has said some encouraging words regarding health care at several of his town hall meetings, although his comments have lacked specifics. He has been stressing the unemployment situation as he should in view of the widespread public anger throughout the nation and the seeming repudiation of the Democratic Party in Massachusetts.

His emphasizing regulation of the banking industry and taxing the excessive salaries and bonuses should play well with our disenchanted citizenry. He has faced up to the corporate control of Congress, but again has avoided specifics such as the fact that the American Health Insurance Plans and PhARMA have spent $10 to $20 million funneled through the U.S. Chamber of Commerce to fight health care legislation.

In my opinion, as I have noted in prior Rag Blog articles, it is no doubt a good thing that the Senate health care plan appears to be fading into oblivion. Encouraging is the fact that Speaker Pelosi has scheduled a vote on revoking the health care industry’s half-century-old exemption from antitrust laws. The vote, according to Politico, is part of a new two-track strategy to tackle things that will not be included in a more sweeping bill — if Congress ever passes one — while giving her members something popular to vote on. The move also puts pressure on Republicans, the industry, and wavering Democrats, who wish their leaders would abandon the push altogether.

Physicians For A National Health Plan have seemingly regained the initiative and are pushing HR 676, or Medicare for All (see Bill Moyers’ interview with Dr. Margaret Flowers) and other proposals that can be reviewed in detail on the PNHP website, including Dr. Quentin Young’s letter to The New York Times and Dr.Flower’s letter to the President.

These initiatives indicate that HR 676, which is merely 30 pages in length (the Senate bill exceeds 1,000 pages) will save the nation 30-40% in health care costs and provide nearly immediate coverage, unlike the Senate bill that defers coverage for 3-4 years and forces individuals by fiat to buy private health insurance, while making no effort to control costs of private insurance.

The administration and the Senate have essentially ignored the wishes of those who provide health care — the doctors and the nurses — and have ceded their allegiance to the insurance and pharmaceutical industries. However, there is encouragement out of the House of Representatives. See “The Public Option May Live Again” at the Daily Kos.

Representatives Jared Polis and Chellie Pingree have sent a letter to Harry Reid calling for the Senate to pass a public option through reconciliation. At the time of this article there were 31 other Democrats who had signed the letter. [Subsequent reports indicate that the number of co-signers has grown considerably, especially among those freshmen who seek reelection this coming autumn.] Polls of 10 front-line freshmen’s districts show that 68% of voters want a public insurance option and that by 5 to 1 voters would prefer for their representatives to fight to add the public option instead of simply passing the Senate bill.

Other problems relative to health care are on the horizon and involve those of us on Medicare. The Los Angeles Times reports that spending on health care was 17.3% of the economy last year. The share paid by the U.S. will soon exceed 50%, a study says. In considering legislation regarding health care we must take heed of what lies ahead. This underlines the urgent need for Congress to work to do away with Medicare Advantage Plans and Medicare Part D’s outlandish largesse to the insurance and pharmaceutical industries — and to tighten up on Medicare fraud and abuse.

These programs are rapidly draining the Medicare Trust Fund. It is, however, critical that we increase fees to primary care physicians as has been repeatedly called for by the American College of Physicians. We cannot leave our elderly citizens without doctors while the health insurance and pharmaceutical industries flourish.

Medicare recipients should be aware of two new websites at the Medicare Rights Center, a national nonprofit consumer service organization that works to ensure access to affordable health care for older adults and people with disabilities through counseling and advocacy, educational programs, and public policy initiatives. Go to Medicare Interactive, and for more detailed information go to Asclepois. There are changes in the Medicare programs about which many of us are totally unaware, such as pending caps on physical therapy and occupational therapy.

I have previously discussed the excessive intensive care for the dying that increases costs of Medicare to an unsustainable level for those of us who would prefer to die peacefully in our own beds, surrounded by our loved ones, with our pain and discomfort relieved by compassionate hospice care. It is barbaric that we subject those for whom the handwriting is already on the wall to the tortures of multiple intubation, multiple intravenous lines, and isolation an ICU, rather than allowing them to die in peace and dignity with family and loved ones.

The United States is a unique culture which cannot accept or face death. James F. Drane, the retired Russel B. Roth professor of bioethics at Edinboro University of Pennsylvania, discusses this phonemenon in a recent op-ed in The Erie Times News. It would behoove the Obama Administration to include Dr. Drane in any pending panel instituted to review Medicare and its future.

I fear for our country’s future, especially when I read the recent poll of Republican thinking published by Daily Kos. If indeed the Democrats fail to reach the general public with messages based on truth and fulfilled by action, we are going to be faced with some very alarming situations in the not so distant future.

Whatever we do, we must act swiftly and without equivocation, because I fear that the effect of the Supreme Court’s decision on corporate contributions will become overwhelmingly evident come the fall elections of 2010.