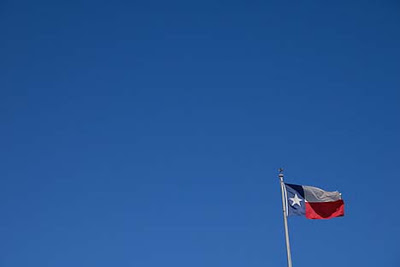 Since Texas has borrowed all it can, and since a state can’t print money like the federal government, the feds are now under enormous political pressure to function as the job creators of last resort.

The Texas Employment Commission, which closely monitors such things, recently announced an increase in Texas’ unemployment from 8% to 8.3%. This jobless increase says that Texas, a traditionally poor state, is now strongly feeling the effects of the national economic slump.

Note that the Texas unemployment rate is mostly rising due to private jobs continuing to disappear. The numbers for the various Texas jobs sectors seem to indicate that average folks are trying to restructure their spending by cutting back as much as they can on discretionary spending; things like travel and utility costs.

Despite the gain of 50,000 jobs in the past three months to the Texas economy, unemployment levels are still on the rise.

The unemployment rate in Texas has risen from 8 percent to 8.3 percent between the November to December, even with employment gains. This is greatly due to the reduction of 23,900 jobs from various Texas employers.

“Texas continues to feel the effects of this serious national recession with unemployment in our state now at 8.3 percent,” said Texas Workforce Commission chairman Tom Pauken. “Nonetheless, unemployment in Texas remains well below the national level of 10 percent.”

Education and health services in the past 12 months have received around 60,400 jobs, specifically 4,800 just in December. Logging and mining even showed signs of growth with an addition of 300 jobs.

Job markets hit with the the most losses include: Trade, transportation and utilities – accounting for a total loss of 7,400 jobs just in December. Other notable job losses for December include: Leisure/hospitality with 6,500 and professional/business services with 5,300.

Down at the micro-economic level, in Texas as elsewhere, the consumer economy seems to be restructuring in a sensible way, given the hard times. We don’t really need as many malls and salesman as last year, now that more folks shop over the Internet for things they really need. Families, perhaps jobless and struggling to live on food stamps, cast what is arguably the most meaningful vote they still have, when they decide whether or not to buy some seductive item they see advertised on TV.

Clean energy and the Austin economy

How does this outside situation affect the Austin area economy? As economic background, Austin lost about 2600 jobs in 2009. Austin unemployment rate rose from about 5.2% to 6.9%. Austin-Round Rock’s registered jobless worker numbers rose from 43,000 to 63,000.

There is always reason to be skeptical of perennial optimism. Take those who point to the Austin area as one of the nation’s strongest metropolitan economies.

Nowadays, we see that computers, high tech, semiconductors, and construction have all mostly faded as lucrative sources of profitable investment for the Austin economy. It is now frequently less expensive to develop software abroad, except for fine tuning local user needs and service requirements. With energy prices less a concern than in 2008, the investment impetus for clean energy has considerably faded.

What is Austin’s next big thing? In the past few years, the Austin business community, Sen. Kirk Watson, and a constellation of influential movers and shakers have been energetically promoting Austin as a clean energy research hub. The “Pecan Street Project” is being promoted by Austin ex-city council member, Brewster McCracken, with the goal of making the Austin area into “America’s clean energy laboratory.”

Just in the last month, we have had access to another opinion that is widely accepted by the local business community. A local economic forecasting group, AngelouEconomics Inc., led by long time Austin economist Angelos Angelou, has just issued its Austin area 2010-2011 Economic forecast; a sort of a report card on Austin’s economic future, concluding as follows:

For Austin to maintain its competitiveness, it must continually build upon these great assets. In today’s struggling financial environment, this translates into increased local government support. Effective economic development policy must be bolstered by strategic incentives and inducements that are competitive with other cities’ attraction packages.

In addition to government support that attracts companies and people, Austin’s success will also be determined by its capacity to grow jobs from within. To do so, the Austin area must cultivate entrepreneurism and attract additional early-stage capital. If people migrating to the region cannot find work, they must find the tools in place to create their own. Austin area residents are very entrepreneurial, and the region needs to continually assess and improve its infrastructure to keep entrepreneurism flourishing.

AngelouEconomics expects the current economic conditions to extend through the second quarter of this year, as the embattled technology sector and real estate markets struggle to rediscover their footing. In the meantime, Austin’s traditional economic base, the public sector, will continue to provide stability. While this
“recession-proof” sector is incapable of supplying the region with an abundance of new jobs, gradual employment gains will persist through the end of the year.

As a rule, it is probably a fact that presidential advisors, fortune tellers, and economists do not thrive on delivering bad news. This new report is not cheery, but it does deliver a whiff of guarded optimism by predicting a modest resumption of job growth for the Austin area. But this is not through the creation of many of the kinds of jobs envisioned by Austin’s clean energy development promoters.

China is now aggressively using its mountain of accumulated U.S. treasury debt to acquire the means to surge ahead on green energy manufacturing, from electric cars, to PV, to wind turbines. Contrast this with the slow progress at Austin-subsidized PV startup Heliovolt. Venture capital, which has been the lifeblood of advanced technology development efforts, is down since even last year, both locally and nationally. The Angelou report regards Austin’s clean energy research efforts as lagging in the face of international competition.

The new thinking is that the health, education, and government sectors will likely be the big job gainers in the Austin economy, to somewhat match the steady decline in Austin area manufacturing over the last decade. It is no coincidence that these are the same economic sectors that thrive on public spending by federal and state governments. For lack of an alternative, the solid job creation burden will increasingly fall on state and or federal government.

Statewide, as we can see from the Texas Workforce report, it is primarily government-subsidized jobs sectors like health and education and government that are increasing. Presumably, Austin should be able to fit into this kind of picture. But now we see spending cutbacks and hiring freezes at the Texas state level, and also at the University of Texas, requiring shutting down the iconic Cactus Cafe, and more.

The state of Texas is broke, at least in the sense that it has slashed state expenses about as far as it can. Since Texas has borrowed all it can, and since a state can’t print money like the federal government, the feds are now under enormous political pressure to function as the job creators of last resort.

The mortgage and credit-card-debt burdened U.S. consumers spend about 70% of all the money spent in the U.S. Such debt-ridden consumers are not currently regarded as a good source of profit; the consumer sector seems to be in a deflationary spiral of uncertain duration. Yet it is only the expectation of profit that can encourage banks to lend money, leading to the creation of jobs which depend on these same consumers as customers.

With the decline of Austin’s past economic drivers, Austin’s future is now more closely linked to conditions in both the Texas and national economies. Looking at the big picture as it affects most states, they have to depend on the feds.

Meanwhile, federal deficits are now pretty much out of control, meaning that the dollar is almost certainly going to have to be devalued in terms of its buying power. Either devalued through a messy collapse or more gradually, which is much preferable.

This means we are likely to see the U.S. consumer’s spending ability continue to deteriorate over the next few years. Here is quite a good quantitative analysis explaining the background to this uncomfortable conclusion.

Wrapping up, what does this all imply for the regional Austin economy? In general, the feds appear to be attaching more strings, in ways that often seem to be sensibly restrained compared to the past, assuming they are still spending. They are tightening up on the ozone limits affecting transportation planning, tightening up federal loan requirements, targeting energy conservation, etc.

As a trend, it looks like the feds will increasingly have to be the source of public funds needed to relieve Austin’s growing unemployment problem. The Austin area will continue to rely on state government and higher education for its traditional and reliable economic base of support, but if so, it will have to be through increasing federal participation.

Accordingly, Austin should figure out how best to play ball with the federal administrators who will be funding Austin’s future jobs programs. Let us hope that this message reaches the Texas Legislature — the fact that we are probably entering a new leaner and more practical and populist era, a time when the luxurious inefficiency of the traditional Texas good-old-boy politics probably isn’t going to work. Need proof? Just ask Gov. Rick Perry whatever happened to his Trans-Texas Corridor plan.

Conclusion: For lack of a better alternative, it probably makes good sense to let the feds guide the way toward Austin’s new industrial future. This necessarily implies political competition with the other needy areas of the USA, already impatiently waiting in line for federal help.