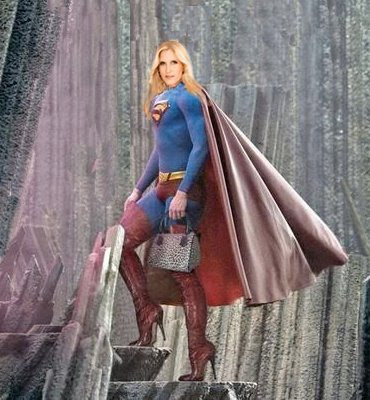 Ms. Coulterman has never married and her housekeeper reportedly was kept employed mainly to sweep up the dried husks of dessicated paramours who mysteriously died after their first date with the self-promoting madwoman.

Trapped in her spandex supersuit, Annie Coulterman is conflicted at the very least. Preparing to make the rounds of talk shows and 4-H County Fairs to promote her new book on sinister organic poison, she had reportedly been unable to unfasten the Velcro and zippers on her around-the-home superbitch lounge wear. The fasteners are all on the far right of her supersuit and she reportedly shredded her housekeeper and stuffed a pillow with her when she was unable to loosen them for her.

Ms. Coulterman has never married and her housekeeper reportedly was kept employed mainly to sweep up the dried husks of dessicated paramours who mysteriously died after their first date with the self-promoting madwoman. Rumors reportedly still abound in the entomology department of her undergraduate alma mater, Cornell University, about supposed sightings of a large red hourglass pattern on her abdomen.

Some individuals of the male species have spent time alone with her with no reported ill effects, including a federal judge who reportedly named Coulterman to a list of the “Top 100 public intellectuals” back in 2001. And Annie Coulterman is public. But she poses no threat to private intellectuals. This female megalomaniac even proudly lists the only five “REPORTERS WHO ARE ALLOWED TO INTERVIEW ANNIE AGAIN” on a web site. But if they are actual reporters, no one I know has ever heard of them or the media for whom they supposedly report.

With the majority throng of liberals who have swept Barack Obama into office, and with the congressional liberal vote clout about to give Orrin Hatch an infarction, Annie would be better advised to go ahead and wear her superwoman suit for her interviews. That way folks might at least notice her on the book tour. Because the airwaves and newspapers are brimming over with news of the new liberal tsunami about to sweep over the remains of the GOP ravaged nation. Sorry Annie. Shout louder and ratchet up your nasal whine if you want to sell your book, but it looks like you will have to do it from atop a soapbox on street corners.

In fact, after NBC canceled your Today Show appearance, and Harry Smith noted in his interview with you on The Early Show that you are “sophomoric” and “goofy,” you might just cut the tour short and minimize your losses. You will be up against Leno in prime time and Saturday Night Live could un-spin your web leaving you to rant neath’ your cape. By the way, I would suggest you have the publicity photo wearing the supersuit touched up a little . . . your ossified ovaries look like, well you know, those things you eat last after one of your first dates.