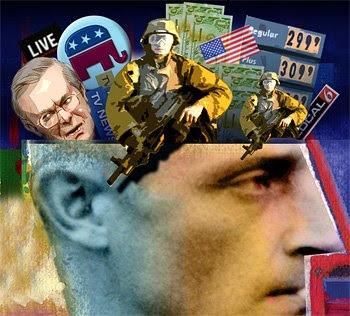 Public opinion. Illustration courtesy of Pew Research Center.
‘The same pundits who are cheerleading Israel’s assault on Gaza once sold the occupation of Iraq to America, and with a nearly identical set of arguments.’
By Max Blumenthal / January 5, 2009

Almost as soon as the first Israeli missile struck the Gaza Strip, a veteran cheering squad suited up to support the home team. “Israel is so scrupulous about civilian life,” Charles Krauthammer claimed in the Washington Post. Echoing Krauthammer, Alan Dershowitz called the Israeli attack on Gaza, “Perfectly ‘Proportionate.'” And in the New York Times, Israeli historian Benny Morris described his country’s airstrikes as “highly efficient.”

While the cheerleaders testified to the superior moral fiber of their team, the Palestinian civilian death toll mounted. Israeli missiles tore at least fifteen Palestinian police cadets to shreds at a graduation ceremony, blew twelve worshipers to pieces (including six children) while they left evening prayers at a mosque, flattened the elite American International School, killed five sisters while they slept in their beds, and liquidated 9 women and children in order to kill a single Hamas leader. So far, Israeli forces have killed at least 500 Gazans and wounded some two thousand, including hundreds of children. Yesterday, the IDF blanketed parts of Gaza with white phosphorus, a chemical weapon Saddam Hussein once deployed against Kurdish rebels.

“It was Israel at its best,” Yossi Klein Halevi declared in the New Republic.

By New Year’s Day, Israel’s cheering squad had turned the opinion pages of major American newspapers into their own personal romper room. Of all the editorial contributions published by the Washington Post, the Wall Street Journal, and the New York Times since the Israel’s war on Gaza began, to my knowledge only one offered a skeptical view of the assault. But that editorial, by Israeli novelist David Grossman, contained not a single word about the Palestinian casualties of IDF attacks. Even while calling for a cease fire, Grossman promised, “We can always start shooting again.”

Israeli public relations agents fanned out to broadcast studios from the US to Europe, fulfilling an aggressive strategy conceived after the country’s catastrophic 2006 attack on Lebanon. An analysis by Israel’s foreign ministry of eight hours of coverage across international broadcast media concluded that Israeli representatives received a whopping 58 minutes of airtime compared to only 19 minutes for Palestinians. “Quite a few outlets are very favorable to Israel, namely by showing [its] suffering. I am sure it is a result of the new co-ordination,” said Major Avital Leibovich, an IDF spokesperson who has become a fixture on cable news in the past weeks.

But while Israel’s PR machine cranked its Mighty Wurlitzer to full blast, drowning out all opposing voices with its droning sound, a surprisingly substantial portion of the American public decided to dance to its own tune. According to a December 31 Rasmussen poll (so far the only measure of US opinion on the Gaza assault), while Americans remained overwhelmingly supportive of Israel, they were split almost evenly on the question of whether Israel should attack Gaza — 44% in favor of the assault and 41% against it. The internals are even more remarkable.

While Republicans supported the assault on Gaza by a large margin, a predictable finding, only 31% of Democrats did. Members of the Democratic base thus stood in sharp contrast to most of their elected representatives (freshman Rep. Donna Edwards is a notable exception), who backed the latest Israeli assault in lockstep, and seem to support Israel no matter what it does. The rift between the progressive base and the party played out on Barack Obama’s Change.gov site, which was deluged in recent days with demands for a statement condemning Israel’s assault on Gaza.

So what accounts for the surprising trend in American opinion on Gaza? The proliferation of progressive online media and social networking sites could be a factor, but I have another theory: The same pundits who are cheerleading Israel’s assault on Gaza once sold the occupation of Iraq to America, and with a nearly identical set of arguments. In their voices and those of the grim Israeli PR agents carted out for cable news, many Americans hear echoes of the Bush administration’s most fantastical lies. When they see images of Gazans under withering bombardment, they flash back to Fallujah and the assorted horrors of Iraq. When they look at Israel, they see themselves during the darkest days of the Bush era.

Now, an increasing share of Americans know what Israel is doing to Gaza. And they reject it, even when Israel is “at its best.”