Cyndi Lauper on Obama’s Brand of Hope : One Size Fits All 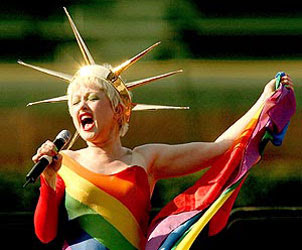 ‘We as a society, LGBT or straight, can show that civil rights are important and discrimination is wrong across the board through our vote.’
By Cyndi Lauper / August 24, 2008

As I toured all over the country this summer with True Colors, I saw something in the eyes of the audience I have not seen in a very long time, it was hope. Each night as I talked about the power of voting, it was evident through their reactions that the crowd wanted to change how this country is run. That is the one good thing that President Bush has done in the past seven years, he has created a movement within the country to change how things are done in Washington DC. But, what mattered to me the most is that everyone cared enough about their own lives and the future to register and vote.

I believe we are at a crossroads and the next ten years will determine the future of this country. Like I said from the stage, this is not voting for the American Idol, it is much more important, this is voting for the American President. And now that I’m home again, and off stage, I wonder, will we become the country that respects the diversity that is our backbone or will we continue down this path of the few ruling the many? I wonder to myself are we gonna make that change in a big way and when I think about it I believe that the change can happen in the form of Senator Barack Obama.

Because, America is a quilt of many fabulous fabrics and we have a sorted history that has not always respected that. And because, for far too long groups of people have been singled out and discriminated against simply because of such things as the color of their skin, their religious beliefs or whom they love. And, that these very acts undermine the basic principles this country was founded on, the time has come to finally break down the barriers that keep America from fulfilling its destiny.

In particular, the lesbian, gay, bisexual and transgender community is closer than ever to gaining full equality. We are teetering back and forth right now, and we need to act together to push us in the right direction. What we are asking for is only fair and right. We as a society, LGBT or straight, can show that civil rights are important and discrimination is wrong across the board through our vote. I believe by voting for Barack Obama we will do just that.

Like Obama, I grew up with a loving, hard-working single mom, in a neighborhood mixed with all races and different backgrounds. And like Obama, I knew that was our strength and not our weakness.

I see in Barack Obama a real fighter for fairness and inclusion, a person who overcame every obstacle growing up to achieve an education and to become the leader he is today. He battles against discrimination of all kinds, from race and gender to sexual orientation and gender identity. He is the most inclusive candidate who has a real chance at the White House that we ever have had. He is a true American who commands respect and more importantly respects Americans – all of us.

I believe that a President Obama would deliver on the promises that have been made to the LGBT community for so long, like inclusive workplace non-discrimination legislation, the end of “Don’t Ask, Don’t Tell”, and finally the passage of hate crimes legislation that includes everyone, not just some. It saddens me in ways I cannot begin to describe just to know that hate crimes still occur in our society. Under President Obama, the Matthew Shepard Hate Crimes Act will finally become law.

When I talk to young people I believe the time has come. It reminds me of my generation in the 1960’s who made a promise to make the world better. The young people today have dedicated themselves as well to this goal and have truly embraced change. They are working harder than ever to elect Barack Obama President because he is a voice of a new and more imaginative generation. They are hungry for new ways of thinking, and to put away old labels, fears, prejudices and bigotries. They believe you can change the world one person at a time. And so do I.

Lastly, I implore you to share your lives with the people you love and care about. Your vote is powerful, but the work cannot end there. Americans are mostly fair-minded people, but are disconnected from the everyday struggles of your life. We are one society and if we are disconnected we fall, but connected we stand tall. If you want people to understand the reality of being LGBT in society today, you need to share your story.

I am an example of what can happen when you share your story. When my sister Elen came out to me and told me about her life, my eyes were opened to the fact that I needed to be a part of changing this country for the LGBT community and have taken that responsibility very seriously.

All my best,
Cyndi Lauper