D. Reavis : A Bridge to Earlier Times in Texas 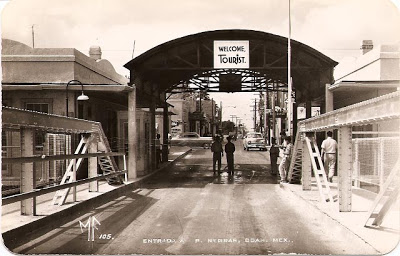 In 1986 I drove every mile of every road on the official highway map of Texas: federal, state and interstate highways, Farm-to-Market roads, too. The venture, underwritten by Texas Monthly and billed as “The National Tour of Texas,” covered some 70,000 miles, though because of necessary doubling-back, I had to drive 37,000 more to get the job done. Chevrolet provided advertising and a Suburban, and I spent a year on the road, mostly not on urban loops or thoroughfares, but coursing through the countryside. Nobody before, and nobody since, has seen Texas in quite the same way.

I kept a long, fat book of lined paper, covered in green canvas, that carried instructions from the Houston office of the American Automobile Association. Its pages told me, for example, “SH 78 S to FM 271 appx. 3 mi./ FM271 SE to FM 68 at Gaber 9 mi.”

Each morning I tossed the book onto the car seat and drove until sundown, usually stopping at noontime for a chopped beef sandwich; my ambition, never realized, was to become an authority on Texas barbecue. I stopped and took pictures of every county courthouse, all 254 of them, but my photos were too murky for commercial use. In almost every settlement, I went to a post office and cajoled a clerk into stamping his date-and-place seal onto a page of my book, to prove I’d been to the town. 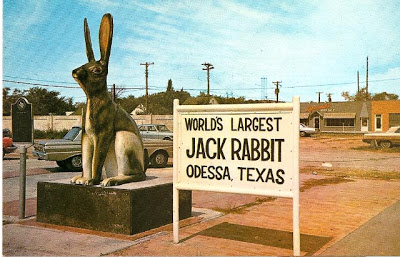 Everywhere I stopped, I looked for postcards. I bought whatever was available, a collection that fills two shoe boxes. When I look at these cards today, I am overcome with longing, and in regard to one feature of the Texas landscape, with rage.

Postcards were popular before long distance telephone calls became cheap. By 1986, that era was gone. Often those I found on the shelves of cafes and drug stores were ten, even 20, years old; a few were older than that. The cars in their scenes were from bygone days.

The postcards depicted county courthouses and First Methodist churches and places that the locals believed were tourist attractions: monuments, lakes, stadiums and playgrounds.

A few of the cards were fanciful—a cowboy riding a giant jack rabbit, for example—and some were plainly funny, either mistakes or honest-to-goodness fakes, showing trout fishing, mountains and pines, from Stratford-on- the-Panhandle, or birch trees in the environs of Hillsboro.

When I look at them today, some of those cards call forth nostalgia. They show buildings or attractions that have since disappeared from the life of Texas: the Aquarena in San Marcos, the Bon Ton restaurant in La Grange, once a traditional stopover on a Houston-Austin drive.

But one set of the cards turns my geezer’s sentimentality to bile. International bridges are a unique feature of Texas architecture—no other American state has them—and border towns were proud of their crossing points. Regulations were lax, life was friendly, and safe and slow atop those spans. Even the River was placid: as a boy in Del Rio during the ‘Fifties, I sometimes rode my bicycle to the bank of the Rio Grande, just to watch shepherds and their flocks on the southern side. Nobody bothered me.

My postcard collection makes it evident that nothing still extant in Texas has changed so much as our borderland doorways. Today’s scene—spying towers, gas-guzzling behemoths, Border Patrol and DEA stickers on their doors, vertical concrete slabs — is not worthy of a postcard. It is entirely cheerless.

Texas was born of Mexico. Like a headstrong adolescent, it went its own way. But when it reached adulthood, parent and child were frequent, unregistered guests in each other’s homes.

Texas was a striver from infancy, burning to rise above its parentage. As if to legitimize itself by finding father figures, it placed itself under the “protection” of the Union, then the Confederacy, then the Union again. None of these stepfathers showed any respect for Mexico. Now our national government, with mean-spirited logic from afar, has put a wall between us and our mother, keeping her at a distance, under surveillance and the point of a gun.

[Dick J. Reavis, a contributor to The Rag Blog, is an award-winning journalist and author. A native Texan, Reavis teaches journalism at North Carolina State University. He was a civil rights worker in the South in the sixties and then was active with Students for a Democratic Society (SDS) at the University of Texas in Austin. He was a frequent contributor to Austin’s iconic underground newspaper, The Rag, and wrote feature articles for Texas Monthly magazine for 12 years, serving as a senior editor at that publication. Dick Reavis’ book, The Ashes of Waco, about the siege and burning of the Branch Davidian compound, was published by Simon and Schuster and may be the definitive work on the subject.] 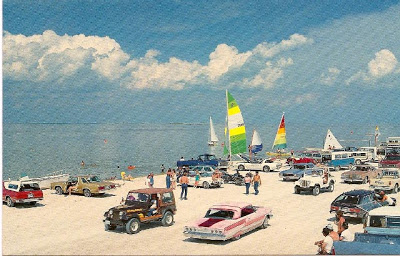 This entry was posted in Rag Bloggers and tagged History, Mexico, Texas. Bookmark the permalink.

3 Responses to D. Reavis : A Bridge to Earlier Times in Texas