Bill Moyers : A Texan’s Take on the Journalist’s Job 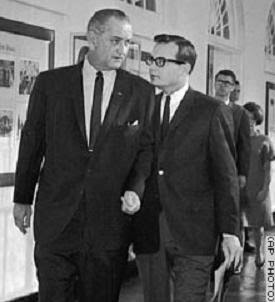 Bill Moyers with Lyndon Johnson
Journalists as Truth Tellers
By Bill Moyers / May 4, 2008


[Texan Bill Moyers delivered these remarks on April 3 in Washington, DC at the fifth annual Ridenhour Prize awards ceremony, sponsored by The Nation Institute and the Fertel Foundation, at which Moyers received the Courage Prize. Moyers, who began his carreer in journalism at 16 as a cub reporter for the Marshall (Texas) News Messenger, served as press secretary to President Lyndon Johnson. In 2006 he was awarded a Lifetime Emmy award for his commentary on public television.

Thank you very much, Sissy Farenthold, for those very generous words, spoken like one Texan to another–extravagantly. Thank you for the spirit of kinship. I could swear that I sensed our good Molly Ivins standing there beside you.

I am as surprised to be here as I am grateful. I never thought of myself as courageous, and still don’t. Ron Ridenhour was courageous. To get the story out, he had to defy the whole might and power of the United States government, including its war machine. I was then publisher of Newsday, having left the White House some two years earlier. Our editor Bill McIlwain played the My Lai story big, as he should, much to the chagrin of the owner who couldn’t believe Americans were capable of such atrocities. Our readers couldn’t believe it either. Some of them picketed outside my office for days, their signs accusing the paper of being anti-American for publishing repugnant news about our troops. Some things never change.

A few years later, I gave the commencement at a nearby university, and when I finished the speech, a woman who had just been graduated came up to me and said, “Mr. Moyers, you’ve been in both government and journalism; that makes everything you say twice as hard to believe.” She was on to something.

After my government experience, it took me a while to get my footing back in journalism. I had to learn all over again that what is important for the journalist is not how close you are to power, but how close you are to reality. Over the last forty years, I would find that reality in assignment after assignment, from covering famine in Africa and war in Central America to inner-city families trapped in urban ghettos and middle-class families struggling to survive in an era of downsizing across the heartland. I also had to learn one of journalism’s basic lessons. The job of trying to tell the truth about people whose job it is to hide the truth is almost as complicated and difficult as trying to hide it in the first place. We journalists are of course obliged to cover the news, but our deeper mission is to uncover the news that powerful people would prefer to keep hidden.

Unless you are willing to fight and re-fight the same battles until you go blue in the face, drive the people you work with nuts going over every last detail to make certain you’ve got it right, and then take all of the slings and arrows directed at you by the powers that be–corporate and political and sometimes journalistic–there is no use even trying. You have to love it and I do. I.F. Stone once said, after years of catching the government’s lies and contradictions, “I have so much fun, I ought to be arrested.” Journalism 101.

So it wasn’t courage I counted on; it was exhilaration and good luck. When the road forked, I somehow stumbled into the right path, thanks to mentors like Eric Sevareid, Fred Friendly, Walter Cronkite and scores of producers, researchers and editors who lifted me to see further than one can see unless one is standing on the shoulders of others. 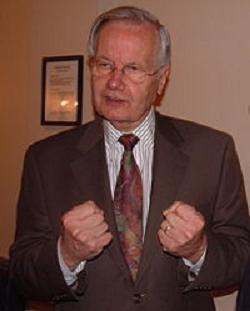 The quintessential lesson of my life came from another Texan named John Henry Faulk. He was a graduate, as am I, of the University of Texas. He served in the Merchant Marines, the American Red Cross and the U.S. Army during World War II, and came home to become a celebrated raconteur and popular national radio host whose career was shattered when right-wingers inspired by Joseph McCarthy smeared him as a communist. He lost his sponsors and was fired. But he fought back with a lawsuit that lasted five years and cost him every penny he owned. Financial help from Edward R. Murrow and a few others helped him to hang on. In the end, John Henry Faulk won, and his courage helped to end the Hollywood era of blacklisting. You should read his book, Fear on Trial, and see the movie starring George C. Scott. John Henry’s courage was contagious.

Before his death I produced a documentary about him, and during our interview he told me the story of how he and his friend, Boots Cooper, were playing in the chicken house there in central Texas when they were about twelve years old. They spotted a chicken snake in the top tier of the nest, so close it looked like a boa constrictor. As John Henry told it, “All of our frontier courage drained out of our heels. Actually, it trickled down our overall legs. And Boots and I made a new door through the hen house.” His momma came out to see what all of the fuss was about, and she said to Boots and John Henry, “Don’t you know chicken snakes are harmless? They can’t hurt you.” Rubbing his forehead and his behind at the same time, Boots said, “Yes, Mrs. Faulk, I know, but they can scare you so bad you’ll hurt yourself.”

John Henry Faulk never forgot that lesson. I’m always ashamed when I do. Temptation to co-option is the original sin of journalism, and we’re always finding fig leaves to cover it: economics, ideology, awe of authority, secrecy, the claims of empire. In the buildup to the invasion of Iraq we were reminded of what the late great reporter A.J. Liebling meant when he said the press is “the weak slat under the bed of democracy.” The slat broke after the invasion and some strange bedfellows fell to the floor: establishment journalists, neo-con polemicists, beltway pundits, right-wing warmongers flying the skull and bones of the “balanced and fair brigade,” administration flacks whose classified leaks were manufactured lies–all romping on the same mattress in the foreplay to disaster.

Five years, thousands of casualties, and hundreds of billion dollars later, most of the media co-conspirators caught in flagrante delicto are still prominent, still celebrated, and still holding forth with no more contrition than a weathercaster who made a wrong prediction as to the next day’s temperature. The biblical injunction, “Go and sin no more,” is the one we most frequently forget in the press. Collectively, we don’t seem to learn that all it takes to transform an ordinary politician and a braying ass into the modern incarnation of Zeus and the oracle of Delphi is an oath on the Bible, a flag in the lapel, and the invocation of national security.

There are, fortunately, always exceptions to whatever our latest dismal collective performance yields. America produces some world-class journalism, including coverage of the Iraq War by men and women as brave as Ernie Pyle. But I still wish we had a professional Hippocratic Oath of our own that might stir us in the night when we stray from our mission. And yes, I believe journalism has a mission.

Walter Lippman was prescient on this long before most of you were born. Lippman, who became the ultimate Washington insider–someone to whom I regularly leaked–acknowledged that while the press may be a weak reed to lean on, it is the indispensable support for freedom. He wrote, “The present crisis of Western democracy is a crisis of journalism. Everywhere men and women are conscious that somehow they must deal with questions more intricate than any that church or school had prepared them to understand. Increasingly, they know that they cannot understand them if the facts are not quickly and steadily available. All the sharpest critics of democracy have alleged is true if there is no steady supply of trustworthy and relevant news. Incompetence and aimlessness, corruption and disloyalty, panic and ultimate disaster must come to any people denied an assured access to the facts.”

So for all the blunders for which we are culpable; for all the disillusionment that has set in among journalists with every fresh report of job cuts and disappearing news space; for all the barons and buccaneers turning the press into a karaoke of power; for all the desecration visited on broadcast journalism by the corporate networks; for all the nonsense to which so many aspiring young journalists are consigned; and for all the fears about the eroding quality of the craft, I still answer emphatically when young people ask me, “Should I go into journalism today?” Sometimes it is difficult to urge them on, especially when serious questions are being asked about how loyal our society is to the reality as well as to the idea of an independent and free press. But I almost always answer, “Yes, if you have a fire in your belly, you can still make a difference.”

I remind them of how often investigative reporting has played a crucial role in making the crooked straight. I remind them how news bureaus abroad are a form of national security that can tell us what our government won’t. I remind them that as America grows more diverse, it’s essential to have reporters, editors, producers and writers who reflect these new rising voices and concerns. And I remind them that facts can still drive the argument and tug us in the direction of greater equality and a more democratic society. Journalism still matters.

But I also tell them there is something more important than journalism, and that is the truth. They aren’t necessarily one and the same because the truth is often obscured in the news. In his new novel, The Appeal, John Grisham tells us more about corporate, political and legal jihads than most newspapers or network news ever will; more about Wall Street shenanigans than all the cable business channels combined; more about Manchurian candidates than you will ever hear on the Sunday morning talk shows.

For that matter, you will learn more about who wins and who loses in the real business of politics, which is governance, from the public interest truth-tellers of Washington than you will from an established press tethered to official sources. The Government Accountability Project, POGO, the Sunlight Foundation, Citizens Against Government Waste, Taxpayers for Common Sense, the Center for Responsible Politics, the National Security Archive, CREW, the Center for Public Integrity, just to name a few–and from whistleblowers of all sorts who never went to journalism school, never flashed a press pass, and never attended a gridiron dinner.

Ron Ridenhour was not a journalist when he came upon the truth of My Lai. He was in the Army. He later became a pioneering investigative reporter and–this is the irony–had trouble making a living in a calling where truth-telling can be a liability to the bottom line. Matthew Diaz and James Scurlock, whom you honored today, are truth-tellers without a license, reminding us that the most important credential of all is a conscience that cannot be purchased or silenced.

So I tell inquisitive and inquiring young people: “Journalism still makes a difference, but the truth matters more. And if you can’t get to the truth through journalism, there are other ways to go.”

To The Nation Institute and the Fertel Foundation, to the Ridenhour judges and to all of you, thank you again for this moment and, above all, for the courage of your own convictions.

This entry was posted in RagBlog and tagged Ethics, Journalism, Media, Texas. Bookmark the permalink.