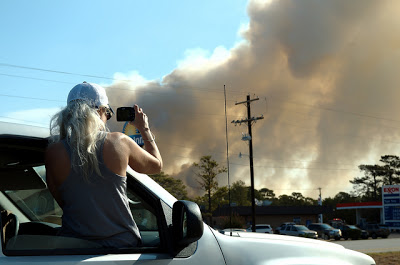 Getting the larger picture. Wildfire in Bastrop, Texas, Sept. 5, 2011. Photo by Phil Ostroff / Truthout.
Another view:
Austerity and the Bastrop wildfires

BASTROP, Texas — I knew the economic and political situation in Texas was dire, but I was completely unprepared for just how appalling conditions have become. As an emergency medical technician (EMT) from a large city, I volunteered to go to rural Bastrop, Texas, to assist the residents who were fleeing from the wildfires raging there; many of them had been injured.

I was looking forward to working in a small community for a change. As an urban EMT, I have witnessed too many drug and alcohol overdoses, stabbings, beatings, and shootings, along with vehicular fatalities.

On the drive to Bastrop, I learned that the town was originally a small Spanish fort. It came under Texas’ control when Texas fought a secessionist war against Mexico. Overlooking Bastrop is the Lost Pines Forest, which contributed to the local economy by supplying Austin and San Antonio with large supplies of lumber.

A fire destroyed Bastrop during the Civil War, but the town was soon rebuilt. Bastrop has only 5,000 residents, while Bastrop County’s population is over 70,000. Many people commute to work in Austin, making Bastrop a wealthy county. Hollywood filmmakers shoot in Bastrop when they need to create historically accurate footage of the old frontier.

When I arrived in Bastrop, I encountered a second set of wildfires: angry, bitter citizens. At one meeting, residents — who had spent nearly a week wondering if their homes had been destroyed by the fire or remained standing — shouted questions at county officials. While some of the Bastrop homeowners demanded an immediate return to their properties (even making threats to state and federal authorities), others were paying “smugglers” to drive, undetected, into off-limits areas in order to retrieve their valuables and keepsakes.

Frustration rose again at the meeting after an announcement that, due to some type of administrative confusion, some of Bastrop’s evacuees would have to reapply for hotel vouchers.

Most Bastrop residents did not make the connection between Gov. Rick Perry’s deep budget cuts to local police and fire departments and the chaos they were facing, or criticize the Department of Homeland Security’s (DHS) stripping of the Federal Emergency Management Agency (FEMA) of funding and staff to address national disasters (nor did they mention the ongoing wars around the globe sucking money from domestic programs).

Meanwhile, dozens of impersonators traveled hundreds of miles to claim their moment of fame. Individuals dressed as firefighters, medical personnel, and police officers were eager to be interviewed by television crews.

Adding to this circus-like atmosphere were looters who drove into restricted and off-limits areas to pillage and plunder other people’s belongings. Fortunately, several of them, their vehicles filled with weapons, money, jewelry, big-screen television sets, small appliances, and other valuables and keepsakes, were stopped and arrested.

I was treating one man for burns on his arm when he heard about the looters. He had to be detained by police and was threatened with arrest if he attempted to return to his home. Still, other people had willingly set fire to their homes to avoid foreclosures or to collect homeowners’ insurance.

What happened in Bastrop is a microcosm of a national epidemic. When then-senator Barack Obama campaigned for the presidency in Texas, he quoted Dr. Martin Luther King Jr. and evoked the “fierce urgency of the now.” Obama stated — accurately — that, “Texas sent more troops to fight in foreign wars than any other state” and that, “the state’s economy was in shambles.”

He campaigned to end the wars and to “stop leaving military children behind” while properly funding public education. He promised to create millions of new jobs and reform banking institutions. Evidently, such goals were not that urgent.

Meanwhile, the ranks of the nation’s poor have swelled to 50 million. Texas is no exception. Perry’s Texas now lies near the bottom of the country when it comes to the well-being of its residents. Millions of adult Texans are uninsured, and millions of the state’s children lack adequate healthcare.

More people work for minimum wage in Texas than in any other state, and it has the highest infant mortality rate, as well. It was recently reported that, since January 1, and in the midst of a multibillion-dollar revenue shortfall, Perry billed Texas taxpayers $294,000 in security details for vacations to the Bahamas, Amsterdam, and Madrid, as well as for other out-of-state trips to promote his book.[1]

On my drive home, I wondered about these other wildfires that need to be extinguished — wildfires such as crime, dishonesty, the need for grandiose media attention, and a dysfunctional state and federal government. Perhaps one person I treated for burns was the most perceptive. He said, “I dreamed that our house was still standing, but it wasn’t. There was only smoke and ash everywhere.”

[Dallas Darling is the author of Politics 501: An A-Z Reading on Conscientious Political Thought and Action, Some Nations Above God: 52 Weekly Reflections On Modern-Day Imperialism, Militarism and Consumerism in the Context of John’s Apocalyptic Vision and The Other Side Of Christianity: Reflections on Faith, Politics, Spirituality, History and Peace. He is a correspondent for www.worldnews.com. You can read more of Dallas’ writings at www.beverlydarling.com and wn.com//dallasdarling. This article was published at and distributed by Truthout.]