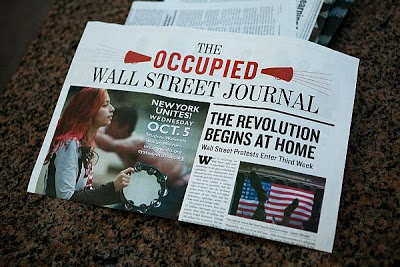 You’ve probably heard about the demonstrations being held in the financial district of New York City by now. The protests started as an attempt for ordinary citizens to occupy Wall Street, and that occupation is still going on days later.

But I’ll bet that all you’ve heard about this “occupation” is the ongoing interplay between the protesters and the police — especially the mistreatment and arrests of the demonstrators. That seems to be the only part of the story that interests the mainstream media.

But that is an old story — older even than this country. The powers that be have always used police/troops to try and suppress demonstrations against them — and if those police/troops needed to use violence to quell the dissent, then so be it. Police violence was used against the demonstrators in Chicago during the 1968 Democratic Convention, and troops fired on demonstrators at Kent State, killing four of them.

Violence by police against the civil rights demonstrators was common throughout the South for many years. And it was the Army that broke up the “Hooverville” camps and demonstrations during the Great Depression.

And this is not just a 20th century phenomenon. When workers were trying to unionize in the late 19th Century, it was the police and troops that helped company “goons” bust up strikes and club the union organizers. And in the 18th Century, before this country was even born, troops fired on a crowd of demonstrators in Boston (now commonly referred to as the “Boston Massacre”). Those are just a few examples — there are hundreds, if not thousands more. It has always been commonplace for authority to be misused by those in power to suppress dissent and prevent change. It’s an old, old story.

I’m not saying it’s not an important story, because it is. Police violence and the misuse of police to suppress dissent is wrong, and it should be exposed and stopped whenever it occurs. But covering only that, as the mainstream media seems to be doing, is missing the bigger story — the much more important story. And that is the story of why those demonstrators are there in the first place — the truth that they are trying to expose to the American public.

This used to be a country where real power rested in the hands of the citizens. They elected officials to represent them and make the rules for all the entities in this society. It was a system that worked fairly well, and when one segment got a little too much power those officials made regulations to bring things back into balance. This has always been a country that worked best when no one sector had too much power — whether that be the corporations, unions, churches, special interest groups, political organizations, social organizations, etc..

But currently things have gotten seriously out of balance, and it is destroying our economy and hurting many millions of Americans. Starting about 1980, the Republicans began removing regulations and instituting other practices that favored one segment of American society above all others — the giant corporations.

It was called “trickle-down” economics, and the theory was that if the corporations (controlled by the richest 1% in America) were given enough money they would eventually share it with the rest of us. Since that time these corporations have fared very well, amassing vast quantities of both money and power — at the expense of workers, the middle class, and small businesses. And nothing was shared — and nothing trickled down.

When George Bush was elected in 2000, this process was greatly accelerated. They didn’t just funnel more money and power to the corporations — they actually let corporate executives write the laws relating to the economy and economic regulations (and to no one’s surprise they removed many regulations, allowing Wall Street and the other giant corporations to go on a rampage of greed).

This has led to the greatest disparity of wealth and income between the richest Americans and the rest of America since before the Great Depression — and just like it did back then, it has led directly to the most serious economic disaster since the Great Depression (our current Great Recession).

In 2008, the people voted for change. They wanted to restore the balance that had been destroyed. But that didn’t happen. First, the Republicans have blocked any change to the status quo. They like the plutocracy they have created.

But the failure of the Democrats has been even sadder. Note that every economic advisor the president has appointed or sought advice from is from either Wall Street or a giant corporation. The same people that were running the economy in the last administration are still running it. The names may have changed, but they are still coming from the Wall Street/corporate power base.

That is the story the Wall Street demonstrators are trying to tell. And that is the story the mainstream media is ignoring. It is the biggest story going, and it is the biggest problem facing this country. But it is also a problem that the corporate-owned mainstream media is not going to cover. They won’t cover it because they are owned and controlled by those same corporations, and they are part of the problem.

So enjoy the stories about police and demonstrator clashes, because that’s all you’re going to get. The real story is too hot to handle.