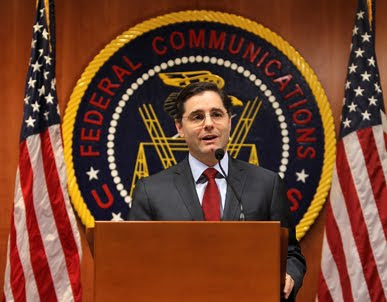 The Federal Communications Commission approved a set of net neutrality rules Tuesday, and nobody is happy. While liberals claim the FCC has caved to pressure from carriers, right-wingers are calling the new rules a government takeover of the Internet. In their tea-addled brains, the new rules represent yet another example of creeping socialism taking over every aspect of our lives. FCC Chairman Julius Genachowski is “Julius Seizure.” Cue the black helicopters.

No matter what you think about the new rules, however, they signal an important turning point in the development of the Internet. We are going from Phase One, where everything is free and open and untamed, into Phase Two, which is all about centralization, consolidation, control — and money.

Because don’t kid yourself. Money is driving all of this. As in: Hey, we’ve created this marvelous new platform for communicating with each other. We’ve demonstrated that very large sums of money can be generated by sending stuff over these wires. Now let’s figure out who gets what.

Tuesday’s new FCC rules grant two big concessions to carriers. First, the rules will apply to wired broadband connections, but they will pretty much leave wireless alone. Second, carriers remain free to create “fast lanes” on the Internet. They can charge Internet companies to ride on the faster pipes, and perhaps also charge consumers more money to get access to those speedy services.

That is a huge deal. It means we are entering an age in which we will have two Internets — the fast one, with great content, that costs more (maybe a lot more) to use, and then the MuggleNet, which is free but slow and crappy. Cable TV vs. rabbit ears.

On wireless — which eventually will be the more important platform — that disparity will be even more evident. The rich will get great stuff. The poor will get, well, what the poor usually get, which is not much.

Oddly enough this bifurcation resonates beyond just the speed of our Internet connection. It also is happening to information itself. We could be heading into a world where the rich get better information, from a wider choice of sources, while the poor get less.

That’s already happening, to some extent. If you’re a trader on Wall Street and can afford a Bloomberg terminal, you get better information sooner than the poor schlumps who are home trying to play at being day traders.

It will happen even more as news organizations, like Rupert Murdoch’s News Corp. and The New York Times, start putting content behind pay walls.

And so the digital divide widens into an information divide, which of course has huge implications for politics, economics, and even democracy itself.

Consider that in the 2008 election both sides were struggling to reach so-called low information voters. What happens when access to information becomes even more restricted? Where your ability to become informed is based upon your ability to pay? That’s the world we’re heading into. The first 15 years of the Internet, where it was all about peace and love and freedom, are drawing to a close.

The ultimate irony is that we are creating an information age where some of us — many of us — will get less information instead of more.

In his terrific new book, The Master Switch: The Rise and Fall of Information Empires, Columbia University professor Tim Wu describes the way every new communication platform starts out with a phase where there is openness and innovation, and where lots of amateurs (now we call many of them “hackers”) try out different things and spout lots of utopian rhetoric about making the world a better place.

Then, about 15 years in, things start to close down and become more centralized. The new platform becomes dominated by a small number of companies in the hands of powerful visionaries with an urge for empire-building. This also happened in telegraph, movies, radio, telephone — and now it’s happening to the Internet.

Now the carriers get their slice of the action. A lot of people hate the carriers, but try, for a moment, to see the world through their eyes. For 15 years they have sat around watching hundreds of billions of dollars of market value get created on the end of their wires (Google, eBay, Apple, Netflix, Amazon, Facebook) while all they get is a puny monthly subscriber fee.

The carriers won’t say this publicly, but I’m sure they resent being denied a share of the wealth being created on the platform that they’ve been so kind to build and maintain for the rest of us. What they also won’t say publicly, or at least not in this blunt a fashion, is: If you want us to keep building out more bandwidth, then start sharing the loot. Otherwise you can go build your own high-speed network.

Obnoxious? Certainly. But also persuasive. The FCC’s compromise probably represents the best deal anyone could get.

What this means for society remains to be seen. But I’m pretty sure those of us who have been around for Phase One of the Internet are going to look back on these last 15 years as the good old days.

[Dan Lyons is technology editor at Newsweek and the creator of Fake Steve Jobs, the persona behind the notorious tech blog, The Secret Diary of Steve Jobs. Before joining Newsweek, Lyons spent 10 years at Forbes. This article was originally published by the The Daily Beast and was distributed by Free Press.]

Interview with Timothy Karr, director of Free Press, by the Young Turks

2 Responses to Dan Lyons : The Internet Splits in Two