Two upcoming sports anniversaries contain elements of tragedy, honor, and courage. But one won’t get much attention. 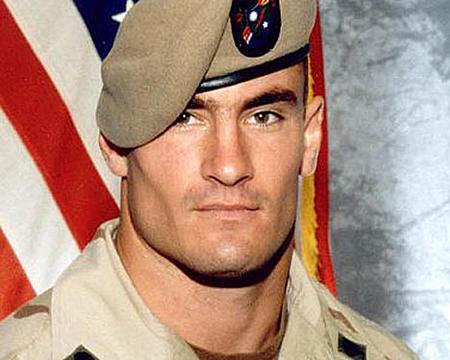 Cpl. Pat Tillman in 2003. A pro football player turned Army Ranger, he was killed by “friendly fire” in Afghanistan in 2004. Photo by AP.

Two wrenching anniversaries loom in the world of sports. Both are in many respects conjoined by the dominant narratives of the 21st century. Both show how the military adventures of the last decade have even breached the escapist sanctity of the sports page. Both contain elements of tragedy, honor, and courage. But you can guarantee, that one of these anniversaries will get a whole hell of a lot more attention than the other.

On Monday, April 21, the Boston Marathon will take place, and we will be compelled to remember the horror of last year’s bombing attack at the finish line. Three were killed and over 250 were injured. Two immigrant brothers, driven by their anger, ideology, and alienation towards what is called “The Global War on Terror” set the blasts. Two brothers: one now dead the other facing state execution. 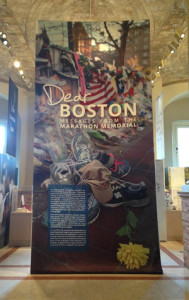 Now, one year later, we will have what will surely be an emotionally raw celebration of what makes the city that hosts the marathon “Boston-Strong.” Expect round-the-clock media coverage. Expect the names of the dead to be remembered. Expect every politician with a pulse to exploit their particular version of what last year’s bombing “means.”

(Here’s hoping that are they learn the lesson David Gregory of Meet the Press discovered, and not blithely tread upon the post-traumatic stress of those who were damaged a year ago. The media’s “reality television” just might be someone else’s reality.)

As everyone follows the — we hope and pray — safe and successful completion of the marathon, there is a very different kind of anniversary the following day. April 22 marks 10 years since the death of NFL player turned Army Ranger Pat Tillman. Expect the media to take cursory notice and expect a press release from the NFL, but don’t expect much else. That’s because the Pat Tillman narrative doesn’t exactly lend itself to swelling music and sonorous sound bites.

Compelled by 9/11, Tillman exited the NFL in his prime, leaving millions of dollars on the table to join the Army Rangers.

Compelled by 9/11, Tillman exited the NFL in his prime, leaving millions of dollars on the table to join the Army Rangers. Square-jawed, Caucasian, and handsome as hell, he was a dream for people like Cheney, Rumsfeld, David Frum, and everyone who drooled at the thought of a glorious, post-9 /11 clash of civilizations.

Yet after several missions into Iraq, a war Tillman believed was “fucking illegal,” he started to read people like Noam Chomsky and other critics of the war. Tillman even expressed a desire to meet Chomsky upon his return to the United States.

On April 22, Pat Tillman was killed. The first story, repeated at his nationally televised funeral, was that the Taliban shot down Tillman in a ferocious firefight. He was posthumously given a Silver Star, which is awarded when a soldier falls at the hands of enemy combatants.

The Bush-Pentagon public relations machine was in overdrive, using Pat Tillman in death in a manner he refused when still alive. As his mother Mary Tillman said to me in 2008, “What’s so disturbing about after Pat’s death is the way the media ran with the perception they had of him, some kind of caricature of who they thought he was. It was so off that it was like he died twice.”

Tillman actually died at the hands of fellow Army Rangers, killed in an incident described as “friendly fire.”

As if his exploitation to aid the Iraqi war drive wasn’t obscene enough, the truth then emerged. Tillman actually died at the hands of fellow Army Rangers, killed in an incident described as “friendly fire.” His military journal and his uniform were burned on site. His death report was falsified.

Tillman’s family has undergone a decade-long quest to find out what actually happened and why they were lied to about his death. As Mary Tillman said to me in 2011, “If it had happened to someone else, Pat would be busting through walls to find the truth.”

But the truth has been hard to find. The person who oversaw what Pat’s father, Pat Tillman Sr., called a “falsified homicide investigation,” Lt. General Stanley McChrystal, wasn’t indicted or brought up on charges. Instead he was promoted by President Obama, before eventually resigning in disgrace so he could write a book and be on The Colbert Report.

Today, in Fenway Park, the Army has used the post-marathon Boston Strong narrative of recovery and community to aid their recruitment efforts.

Today, in Fenway Park, the Army has used the post-marathon Boston Strong narrative of recovery and community to aid their recruitment efforts. As the blog WMTC discussed, the many screens of Fenway Park now show ads that blare, “There’s Strong And Then There’s Army Strong!” The message could not be clearer: there is Boston Strong, there is Army Strong, and one is only as, well, strong as the other.

If you want to keep Boston strong and prevent more bombings, you better join up and make sure than the Army is strong as well. There are no ads to suggest that maybe occupying countries, sending in armed drones and conducting dirty wars in remote lands, will create conditions that bring the war back to the United States.

The Army and the government can’t use the Tillmans like they use the Boston Marathon for the simple reason that the Tillmans refuse to be used. That’s also what makes the Tillman anniversary so difficult for the mainstream media, the armed forces and the NFL to commemorate.

By continuing to search for the truth, by refusing to let Pat be turned into a prop for war, the Tillmans have no value to those who benefit politically or economically from this era of endless war. For the rest of us, however, the Tillmans are invaluable. They deserve something the U.S. Congress, the NFL, and the mainstream media have refused to give them over the last decade: our unconditional solidarity and support as they search for the truth.

This article was first posted to Dave Zirin’s blog at The Nation.