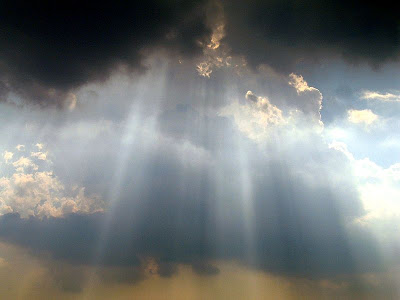 The sky! Image from Wikimedia Commons.
Texas judge rules:
‘The sky belongs to everyone’

Is this a ‘shot heard round the world’ for fight against climate change?

“Texas judge rules atmosphere, air is a public trust,” reads the headline in the Boston Globe. A tiny breakthrough but with big potential consequences.

And as we continue to suffer from one of the most extended heat waves in U.S. history, as major crops have withered and fires raged in a dozen states, we need all the tiny breakthroughs we can get.

The “public trust” doctrine is a legal principle derived from English Common Law. Traditionally it has applied to water resources. The waters of the state are deemed a public resource owned by and available to all citizens equally for the purposes of navigation, fishing, recreation, and other uses.

The owner cannot use that resource in a way that interferes with the public’s use and interest. The public trustee, usually the state, must act to maintain and enhance the trust’s resources for the benefit of future generations.

Back in 2001, Peter Barnes, a co-founder of Working Assets (now CREDO) and On the Commons as well as one of the most creative environmentalists around, proposed the atmosphere be treated as a public trust in his pathbreaking book, Who Owns the Sky: Our Common Assets and the Future of Capitalism (Island Press).

In 2007, in a law review article, University of Oregon Professor Mary Christina Wood elaborated on similar idea of a Nature’s Trust. “With every trust there is a core duty of protection,” she wrote. “The trustee must defend the trust against injury. Where it has been damaged, the trustee must restore the property in the trust.”

She noted that the idea itself is not new.

when private enterprise threatened the shoreline of Lake Michigan, the Supreme Court said, “It would not be listened to that the control and management of [Lake Michigan] — a subject of concern to the whole people of the state — should… be placed elsewhere than in the state itself.” You can practically hear those same Justices saying today that “[i]t would not be listened to” that government would let our atmosphere be dangerously warmed in the name of individual, private property rights.

In 2010 Wood, along with Julia Olson, Executive Director of Our Children’s Trust, “had the vision to organize a coordinated international campaign of attorneys, youth, and media around the idea that the climate crisis could be addressed as a whole system,” Peter Barnes observes, replacing a situation in which “legal solutions were fragmented, focused on closing down a particular power plant or seeking justice for a particular endangered species, threatened neighborhood or body of water impacted by our fossil fuel abuse.”

On behalf of the youth of America, Our Children’s Trust, Kids Versus Global Warming, and others began filing suits around the country, arguing the atmosphere is a public trust. So far cases have been filed in 13 states.

In Texas, after a petition to the Texas Commission on Environmental Quality (TCEQ) to institute proceedings to reduce greenhouse gases was dismissed, the Texas Environmental Law Center sued on behalf of a group of children and young adults. The Center asserted the State of Texas had a fiduciary duty to reduce emissions as the common law trustee of a “public trust” responsible for the air and atmosphere.

The atmosphere, including the air, is one of the most crucial assets of our public trust… Global climate change threatens to dry up most of these waters, turning them from gorgeous, life-giving springs into dangerous flash-flooding drainages when the rare, heavy rains do come. The outdoors will be inhospitable and the children will have few places to recreate in nature as the climate changes. They will be living in a world of drought, water shortages and restrictions, and desertification.

The court went further to argue that the public trust doctrine “is not simply a common law doctrine” but is incorporated into the Texas Constitution, which (1) protects “the conservation and development of all the resources of the State,” (2) declares conservation of those resources “public rights and duties,” and (3) directs the Legislature to pass appropriate laws to protect these resources.

The immediate impact of the case is limited. Noting that a number of climate change cases were wending their way up the judicial ladder, Judge Triana upheld the TCEQ decision not to exercise its authority.

But a few days after Judge Triana’s ruling, Judge Sarah Singleton of the New Mexico District Court denied the state’s motion to dismiss a similar case. That will now move forward.

The Texas court is the first to support the possibility that the “public trust” doctrine may justify the creation of an atmospheric trust. One Houston law firm advised its clients the decision “may represent a ‘shot heard ‘round the world’ in climate change litigation… Given the stakes involved in such cases, clients should monitor these suits carefully — and perhaps participate as amicus curiae to support the state’s attorneys’ arguments.”

What a delicious irony if future generations could look back to Texas as the catalyst that ultimately afforded legal protection to the sky.

[David Morris is Vice President and Director of the New Rules Project at the Institute for Local Self-Reliance, which is based in Minneapolis and Washington, D.C., focusing on local economic and social development. This article was first published at On the Commons under a Creative Commons license, and was distributed by Common Dreams.]