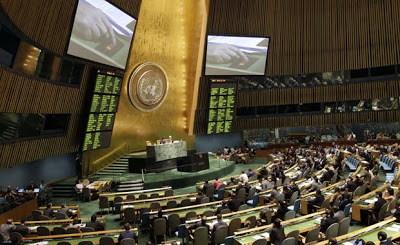 Those who sponsored the resolution condemning violence were the same nations that had ‘played a major role in the militarization of the situation in Syria, by providing weapons to the terrorist groups.’

The United Nations General Assembly approved a resolution Friday, August 3, 2012, that The New York Times said, “severely criticized the Syrian government, blaming it almost exclusively for the killings and other atrocities that have come to shape the 17-month uprising there.”

The resolution condemning Syria ironically implied that it was that country that refused to carry out the peace plan that was proposed four months earlier by Kofi Annan. No mention was made in the resolution that the United States, Britain, France, Saudi Arabia, and Qatar, among others had been feeding supplies to anti-government militias that encouraged them to violence rather than negotiation.

While 133 Western and Arab League allies voted for the resolution, 33 countries abstained, and 12 voted“no.” These were portrayed as Syria’s “slim group of backers, which include Russia, China, and Iran.”

Syria is a dictatorship that in the recent civil war has leveled brutal violence against its own people. But the Syrian Ambassador was correct in asserting that those who sponsored the resolution condemning violence were the same nations that had “played a major role in the militarization of the situation in Syria, by providing weapons to the terrorist groups.”

It is not surprising that The New York Times failed to mention that Cuba has been one of the longstanding critics of U.S. inspired wars on weak countries such as Libya and now Syria. The Cuban Permanent Representative to the United Nations, Pedro Nunez Mosquera, warned that the resolution which was adopted would encourage more violence from the opposition and retaliation by the state. With growing instability, he asserted, foreign intervention would become legitimized the way it was in the Libyan case.

In an article in Prensa Latina, the Cuban diplomat’s position was summarized: “Cuba considers that all acts of violence, massacres and terrorist acts that claim innocent lives in Syria should cease” but this will require that the anti-Syrian coalition “must put an end to arms smuggling and money to insurgent groups and their training.” Nunez also criticized the major Western media’s one-sided reporting on the violence in Syria.

It is clear that Cuba’s criticisms of the wars on Libya and Syria and the Western economic blockade and military threats toward Iran are motivated by self-interest as well as principle. Cuba, as a country that has suffered an economic blockade by the United States for over 50 years and a U.S. policy designed to diplomatically isolate it, sees similarities between its experiences and U.S. policies toward Syria and Libya.

Despite some U.S. liberalization of travel to the island nation, government agencies and counterrevolutionary organizations in Miami continue to funnel funds, technology, and propaganda to create an opposition that, they hope, will lead to an armed resistance against the Cuban government. If the Cuban government responds to terrorist acts, a U.S orchestrated coalition of dependent allies can justify the transfer of arms, propaganda campaigns, and escalating calls for revolution.

What may be called today the “Libyan Model of Destabilization” is not new to Cubans and as a result they see the necessity of continued vigilance.

Alan Gross, hired by the United States Agency for International Development, was caught distributing computer technology to selected communities on the island. A global propaganda campaign was raised about a recent car accident in which two well-known opponents of the regime who were traveling with rightwing Europeans in the countryside were killed. No evidence of foul play was provided concerning the accident although charges by Miami Cubans of government violence have been broadly distributed.

Also a recent Miami scholarly conference was organized with presentations by counterrevolutionaries who argued that the recent economic reforms on the island will never work. And repeatedly U.S. and British media highlight alleged growing disenchantment with the regime.

The Libyan Model of Destabilization, which has its roots in the years of economic blockade of Cuba, terrorist acts and assassination plots, the creation of counter-revolutionary groups in Florida and New Jersey, and even an armed invasion, is not likely to work in the Cuban case. First, the Cuban regime has broad popular support. Second, Cuba’s first priority remains social and economic justice. Third, Cuban health care and education are among the best in the Global South.

And, finally, Cuba remains an inspiration to those countries throughout the Western Hemisphere (such as Venezuela, Bolivia, Ecuador, Nicaragua, Argentina, Brazil, and El Salvador) who seek to create political and economic autonomy in the 21st century. As evidenced in positions taken at the recent Summit of the Americas in Cartagena, Colombia, Latin American countries defended Cuban national sovereignty and are demanding that the latter be included in future meetings of Hemisphere nations.

But as the Libyan model and now the Syria crisis suggest, weak countries everywhere in the world must remain vigilant. Imperialism still survives.