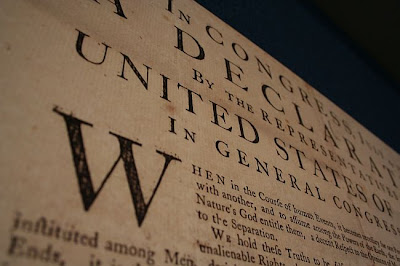 Photo by Tom Weber / Minnesota Public Radio.
Notes from a Texas patriot:
Though stained with hypocrisy,
The vision has inspired millions

Today is the 234th anniversary of the adoption and publication by the Continental Congress of the United States of America of these words that never fail to stir my soul:

We hold these truths to be self-evident, that all men are created equal, that they are endowed by their Creator with certain unalienable Rights, that among these are Life, Liberty and the pursuit of Happiness… That to secure these rights, Governments are instituted among Men, deriving their just powers from the consent of the governed…

The conception of the vision was stained with hypocrisy from the beginning, most especially by the Continental Congress’s submission to the evil of slavery. Although Thomas Jefferson’s original draft of the Declaration contained a passage denouncing the slave trade, the delegates to the Congress removed that passage over Jefferson’s strenuous objection.

Also hypocritical was the failure of the men who adopted the Declaration of Independence to extend the vision of equality to females, as well as their blindness to the humanity of indigenous American peoples.

Nevertheless, the vision of a new human society characterized by self-governing representative democracy and universal human rights set down in the American Declaration of Independence and delivered to the world 234 years ago still remains always one of the greatest gifts any people has ever given to the rest of humanity.

The image of human rights, equality, and democracy described in the words of the Declaration has always given us a shining goal toward which to train our sights, and toward whose ultimate realization each generation is charged to progress further than the generations that came before.

The Declaration’s transcendent vision has often inspired the march across American history toward the just society. For example, Dr. Martin Luther King often referred to the Declaration of Independence in the soaring speeches in which he challenged America to live up to its own promise. The peaceful revolution for which Dr. King served as one of the chief spiritual voices and courageous leaders was nothing less than a cry for America to be what it was meant to be, must be, and will be.

The Declaration of Independence is a living document, not a stale antique. It is just as needed and potent for us today as it was for the heroes who challenged the mightiest empire in the world with hunting rifles in 1776.

For example, today a sick perversion of the dream of 1776 daily oppresses the majority of the American people. It is a twisted distortion of America’s founding vision that holds “all men are created equal” to really mean “all men and corporations are treated equal” and “the consent of the governed” to really mean “the consent of the corporations.”

This distortion threatens to subordinate human rights to the rule of almighty profit and to put an end to self-governing rule by the people. The 234th anniversary of the Declaration of Independence is a perfect time to recall that the intent of that momentous day was to proclaim human rights for people, not soulless corporations; democracy, not corporate oligarchy; and equality, not inequality.

Let us remember who we Americans are. We are the political descendants of farmers, shop-owners, and laborers who left their farms and shops to challenge the might of the most powerful empire in the world with their hunting rifles; and did it not to follow a different monarch or duke or count, but in order to set up something unheard of in the world, a whole nation where there are no kings or royalty, but instead where the people are equal to one another and the people govern themselves.

Our national forebears of 234 years ago acted with unimaginable courage and audacity. They knew their odds of winning were extremely slight when they rebelled against the British Empire, but they did it anyway. They believed in unrestricted liberty and unrestrained democracy. They pledged to each other their lives, their fortunes, and their sacred honor. They dared to dream the impossible.

They won, and we are here 234 years later still believing in their dream. The passion for democracy that motivated their revolution has inspired revolutions against tyranny all over the planet for over two centuries, and still does so this very day. All across the world, oppressed peoples have believed that if our forebears could do it, they can do it too.

This is a monumental legacy that we inherited. I believe it is our duty to preserve and strengthen it for our posterity. Let us defend it against all the King Georges of today who still seek to stamp it out. Let us defend it so well as to ensure that our distant descendants will still be celebrating this birthday in a glittering future when the awesome goal of human rights, justice, equality, and democracy has been fully realized and all human beings live in brotherhood and sisterhood in a world of universal democracy, equality, justice, and peace.