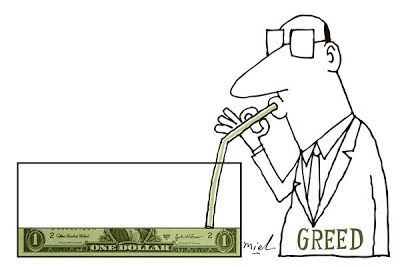 Political cartoon by Deng Coy Miel, Singapore.
(On being mad as hell…)
The divine right of greed

Would it make you feel even better to know that, as reported by Nobel Prize winning economist Joseph Stiglitz (“Of the 1%, by the 1%, and for the 1%”, Vanity Fair, May 2011), the wealthiest 1% of Americans now rake in 28% of the income and own 40% of the wealth and property?

America is not broke. There are enormous amounts of money and resources in our society. But the super-rich are hoarding their fortunes, and government tax laws written by the 1% for the 1% have institutionalized a divine right of greed.

Bank of America was gifted with 45 billion dollars in taxpayer funded bailout money in 2009. Did Bank of America learn any lessons? You be the judge. Bank of America paid no taxes for tax year 2009 because it reported a net loss on its tax return. In 2010 its CEO received compensation worth 10.1 million dollars, including bonuses. Does a corporation that has that kind of money available to pay to one employee sound like a company that is strapped for cash?

Medieval monks taught that greed is a deadly sin. For 30 years, since the false saint Ronald preached the false doctrine that greed is a glorious virtue, the America of checks and balances that our American founders envisioned has been sinking under the weight of greed.

I don’t buy the false libertarian crap that idealizes greed as a high manifestation of American freedom. Freedom to avoid sharing responsibility for the common good is not an American ideal. Among the very purposes of the founding of the government of the United States of America, as set forth in the Preamble to the Constitution, are to form a more perfect Union and to promote the general Welfare. “Form a more perfect Union” means uniting for the common good. “Promote the general Welfare” means we are all in this together.

Stiglitz writes similarly in the Vanity Fair article, “Of all the costs imposed on our society by the top 1%, perhaps the greatest is this: the erosion of our sense of identity, in which fair play, equality of opportunity, and a sense of community are so important.”

Greed may be a vice that we cannot hope to eradicate from the human condition. However, that does not mean that as a society we are helpless before the ravaging effects of greed. Just as through our governments we seek to enact and enforce just laws to protect our society from violence, we also have the power and the right to enact and enforce just laws to hold greed in check.

At the top of the political tower, the corporate-political complex of today exists primarily to protect the false divine right of greed. Most of the members of the U.S. Congress are part of the 1% and they do whatever it takes to protect the power, wealth, greed, and hoarding of the 1%, while throwing enough bones to the 99% to keep us fooled and pacified.

If you aren’t mad as hell about it, you ought to be.

4 Responses to David Van Os : The Divine Right of Greed