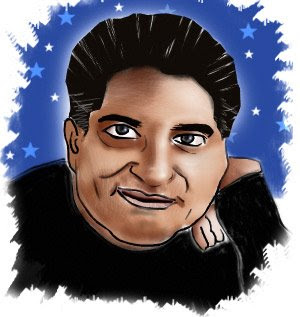 Deepak Chopra argues for a cool-headed response, saying that this is “Obama’s opportunity to actually harness the help of the Muslims.”

Mumbai Attacks: ‘If You Go After the Wrong People, You Convert Moderates into Extremists’
November 28, 2008

The Indian city of Mumbai exploded into chaos early Thursday morning as gunmen launched a series of attacks across the country’s commercial capital, killing scores of people and taking hostages in two luxury hotels frequented by Westerners.

Larry King: Where were you born in India, Deepak?

A friend of mine from Egypt was in the restaurant at the Taj hotel when the firing started, and somehow she managed to avoid the fray, hid in a basement and is now holed up in a room which is right next to the Taj hotel and is waiting to be told what to do.

The situation is complex, Larry, because it could inflame to proportions that we cannot even imagine. It has to be contained. We now recognize that this is a global problem, with only a global effort can solve this.

You know, this is Obama’s opportunity to actually harness the help of the Muslims.

You know, there’s 1.8 billion Muslims in the world. That’s 25 percent of the population of the world. It’s the fastest-growing religion in the world. We cannot, if we do not appease and actually recruit the help of this Muslim world, we’re going to have a problem on our hands.

And we cannot go after the wrong people, as we did after 9/11, because then the whole collateral damage that occurs actually aggravates the situation.

In India, this is particularly inflammatory, because there’s a rise of Hindu fundamentalism. We saw what that did in Gujarat, where, you know, Muslims were scorched and they were killed, and there was almost a genocide of the Muslims.

India has 150 million Muslims. That’s more Muslims in India than in Pakistan. So this is an opportunity right now for India and Pakistan to recognize this is their common problem. It’s not a Muslim problem right now; it’s a global problem.

King: Do you think that this is just the beginning, that there’s a potential impact, or more?

Chopra: There is a potential impact of a lot more carnage. But it can be contained. And right now, one of the questions [is, given] that there are militant groups that cross international boundaries, is who is financing this? Where is the money coming from? We have to ask very serious, honest questions. What role do we have in this? Are our petrodollars funding both sides of this war on terrorism? Why are we not asking the Saudis where that money is going that we give them? Is it going through this supply chain to Pakistan?

It’s not enough for Pakistan to condemn it. Pakistan should cooperate with India in uprooting this. They should be part of the surgery that is going to happen.

It’s not enough for Indians to blame Pakistanis. Indians should actually ask the Pakistanis to help them.

And it’s not enough for us to worry about Westerners being killed and Americans being killed. Every life is precious over there. We have got to get rid of this idea that this is an American problem or a Western problem. It’s a global problem, and we need a global solution, and we need the help of all the Muslims, 25 percent of the world’s population, to help us uproot this problem.

King: What does India immediately do?

Chopra: India at this moment has to contain any reactive violence from the fundamentalist Hindus, which is very likely and possible. So India has to condemn that by not blaming local Muslims. They have to identify the exact groups.

King: Are you pessimistic?

Chopra: I think Mr. Obama has a real opportunity here, but a challenging opportunity, a creative opportunity.

Get rid of the phrase “war on terrorism.” Ask for a creative solution in which we all participate.

King: Is it because the war on terrorism really can never be won…?

You know, terrorists call mechanized death from 35,000 feet above sea level with a press of a button also terror. We don’t call it that, because our soldiers are wearing uniforms. They don’t see what is happening, and innocent people are being killed. So, you know, terror is a term that you apply to the other.

Here is a transcript of remarks by Deepak Chopra in an additional CNN interview.

Chopra: What we have seen in Mumbai has been brewing for a long time, and the war on terrorism and the attack on Iraq compounded the situation. What we call “collateral damage” and going after the wrong people actually turns moderates into extremists, and that inflammation then gets organized and appears as this disaster in Bombay. Now the worst thing that could happen is there’s a backlash on the Muslims from the fundamental Hindus in India, which then will perpetuate the problem. Inflammation will create more inflammation.

CNN: Let me jump in on that because you’re presuming something very important, which is that it’s Muslims who have carried out these attacks and, in some cases, with Washington in their sights.

Chopra: Ultimately the message is always toward Washington because it’s also the perception that Washington, in their way, directly or indirectly funds both sides of the war on terror. They fund our side, then our petrol dollars going to Saudi Arabia through Pakistan and ultimately these terrorist groups, which are very organized. You know Jonathan, it takes a lot of money to do this. It takes a lot of organization to do this. Where’s the money coming from, you know? The money is coming from the vested interests. I’m not talking about conspiracy theories, but what happens is, our policies, our foreign policies, actually perpetuate this problem. Because, you know, 25% of the world’s population is Muslim and they’re the fastest growing segment of the population of the world. The more we alienate the Muslim population, the more the moderates are likely to become extremists.

1 Response to Deepak Chopra to Obama : Mumbai an Opportunity