One Family Is Changing the Face of Christmas 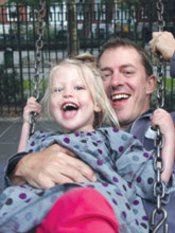 Colin Beavan plays with his daughter Isabella
at Washington Square Park near their home.
Photo: Paul Dunn/YES! Magazine
Christmas with No Presents
By Colin Beavan / November 26, 2008

One family’s daring experiment: Christmas without all the stuff.

If Christmas is about presents, then in 2007, my little family and I had no Christmas. I mean, we had the caroling and the uncle playing the piano and the cousins running around with my three-year-old, Isabella, and the grandfather coaxing her to sit on his lap and the good food.

We had, in other words, an amazingly good time.

What we didn’t have, though, was the average American’s $800 hole in our bank accounts, gouged out by Christmas-present spending. Nor did we have the credit card debt still unpaid by June. Nor the forcing of smiles for gifts we didn’t really want. Nor the buying of extra luggage to bring home those unwanted gifts. Nor the stressful rush of last-minute crowds at the mall.

Without presents, you see, we didn’t have the sensation that I, at least, normally associated with Christmas—the stress. And without stress or presents, it’s not Christmas, right? But of course it was. It was the best of Christmas, the part that, research shows, makes people happiest. It was all the upside without the downside.

Let me back up.

From November 2006 to November 2007, I and my little family—one wife, one toddler, one dog—embarked on a lifestyle experiment in which we tried to live with the lowest possible environmental impact (you can read about it on my blog NoImpactMan.com). Among other measures, the experiment included not making trash, not using any form of carbon-producing transportation, and not buying anything new.

This may sound like a lot of meaningless self-deprivation, but the question we wanted to answer was this: Does consuming fewer resources actually feel like deprivation, or is it possible that consuming less opens up another way of life that provides more enduring satisfaction? Or put another way, could we find a win-win way of life that might be happier both for us and for the planet?

Sometimes the answer was no. It may be better for the planet if we all decided not to buy big hunks of metal otherwise known as washing machines, but—believe me—washing my family’s clothes by hand did not make me happier. 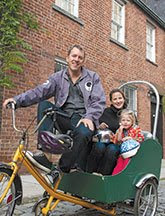 On the other hand, eating local and riding bikes instead of driving cars allowed us to lose the spare tires around our guts, cure ourselves of longstanding skin problems and insomnia and become generally healthier. And not using electricity to power entertainment devices drew us closer together as a family and made us spend more time with friends.

Our experiences illustrated that some uses of planetary resources improve quality of life and some may not. Indeed, we could go a long way toward dealing with the crisis in our planetary habitat if we found a way to avoid those uses that don’t improve our lives—like the packaging that comprises 40 percent of trash in landfills, for example.

But as Christmas 2007 approached, the more pressing question for us was, did the season’s huge consumption of resources add to the Christmas experience or detract from it? Since one-sixth of all American retail sales (and as a consequence, a hefty proportion of our national planetary resource use) occurs during the holiday season, it’s a question worth asking.

Despite the fact that people spend relatively large portions of their income on gifts, as well as time shopping for and wrapping them, such behavior apparently contributes little to holiday joy.

I’ve already told you enough to let you guess how my little family’s experience played out, but you may be surprised to learn that our findings are backed up by bona fide psychological research: Even though oodles of presents at Christmas is the dominant American paradigm, it turns out that people who spend less and have less spent on them at Christmas actually enjoy the season more.

This, anyway, is the conclusion of a paper published in the Journal of Happiness Studies by researchers Tim Kasser of Knox College and Kennon M. Sheldon of the University of Missouri-Columbia. After studying the Christmas experiences of 117 individuals, they found that people who emphasized time spent with families and meaningful religious or spiritual activities had merrier Christmases.

“Despite the fact that people spend relatively large portions of their income on gifts, as well as time shopping for and wrapping them,” the researchers said, “such behavior apparently contributes little to holiday joy.” In fact, subjects who gave or received presents that represented a substantial percentage of their income, Kasser and Sheldon found, actually experienced less Christmas joy.

The Story of Stuff

A fun and fact-filled look at the underside of our production and consumption patterns.
WATCH THE FILM & LEARN 10 LITTLE AND BIG THINGS YOU CAN DO

Of course, this makes perfect sense. We all know in our hearts that treasuring meaningful experiences and spending time in valued relationships — at Christmas or any other part of the year — make us happier than getting more stuff.

But try telling that to the grandparents at Christmas time!

Try living out these lofty principles when the rest of your family and friends are swapping presents at the same rate as ever. You may find “bah humbugs” shouted in your direction more than once. That’s problematic, particularly if you’re hoping to inspire more sustainable lifestyle choices in other people. Nobody will be convinced by dogmatism or Grinch-like behavior.

The trick to a happy, sustainable, non-consumptive Christmas was not, we discovered, to ignore the expectations of the people we celebrated with. We didn’t want our loved ones to feel bad. Those who expected presents should get them, we decided. Gifts, after all, are associated with the exchange of love.

For us, the answer was to buy presents that did not require the exploitation of large amounts of planetary resources. My mother was very happy with the two massages she got. My father and his wife enjoyed the gift certificate to the fine dining, local-food restaurant in their neighborhood. Friends appreciated the theater tickets we bought them. And unlike those unwanted trinkets one sometimes buys for the “person who has everything,” our sustainable gifts, we felt, actually improved the recipients’ lives.

Still, my wife, Michelle, worried very much that it would be hard for Isabella if all the cousins had presents to open, but she didn’t. Try saying, “The research says you’ll be happier with less,” to a three-year-old. So Isabella’s Aunt Maureen contributed toys that her children had outgrown, and we wrapped them for Isabella.

When present-opening time came, Isabella didn’t care whether the present she was opening was for her or not. She didn’t even want the presents. She just wanted to open them. She didn’t want something to have later. She wanted to participate now. And when her Uncle Joe started playing the piano and singing, she got bored with the present opening anyway and went to sit with him on the piano bench.

Much to our surprise, she didn’t even want to take her cousins’ old toys home when the Christmas vacation was over. She’d already had her presents. What was important to her was what turned out to be important to us: the singing, the charades, the laughter, the time spent with family, and of course, the celebration.

Colin Beavan wrote this article as part of Sustainable Happiness, the Winter 2009 issue of YES! Magazine. Colin’s book about his No Impact Man experiment will be published by Farrar, Straus & Giroux in September 2009. Visit his blog at NoImpactMan.com.]