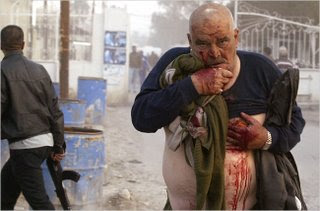 One Foot in the Grave: Iran Attack Nearer, More Likely Than Most Suspect
by Chris Floyd / March 22, 2008

A very important, very disturbing — and almost entirely overlooked — piece appeared on Juan Cole’s Informed Comment site this week. It was a guest column by William R. Polk, laying out, in copious and convincing detail, the evidence indicating that the United States will indeed launch a military strike against Iran, most probably before George W. Bush leaves office.

However, even if Bush does hold off for some reason, the processes that Polk describes will almost certainly lead the next president into war with Iran, especially as the three remaining major candidates have forcefully pledged to keep “all options, and I mean, all options on the table” (Polk quotes Barack Obama’s bellicose formulation). And none of them are likely to have the political courage that Polk rightly says would be necessary to climb down from the highly aggressive posture that both parties have adopted toward Iran.

Polk is no radical firebrand; indeed, he comes toting heavy Establishment lumber: White House service (under John Kennedy), top academic and institutional posts, weighty books on history and international affairs, etc. Yet he paints as stark a picture of the situation as the most implacable dissident.

One development that has arisen after the article was posted gives added credence to Polk’s case. In recent days, both Bush and Dick Cheney have revived the scaremongering threat of an Iranian nuclear bomb that had seemed diffused by the NIE report earlier this year. Of course, that report — in which America’s myriad intelligence agencies declared their consensus view that Iran’s nuclear weapons program is moribund — was itself a more subtle piece of scaremongering. Because the report asserted — without any credible evidence — that Iran HAD been building a nuke until 2003. While the headlines focused on the overall conclusion, the Bush Administration made hay with that latter assertion: “See, we told you Iran has been building a nuclear weapon! We were right.”

They weren’t, of course, but this assertion was a propaganda weapon just waiting to be picked up: and now it has. Bush and Cheney refer to the NIE report as “proof” that Iran has been surreptitiously building nuclear weapons in the recent past — and therefore could be secretly building them again right now. Cheney was very explicit about this during his recent tour of Iraq and other stops in the Middle East — a trip that many have noted carries sinister echoes of a similar jaunt he made around the region just before the invasion of Iraq. As AP notes:

Vice President Dick Cheney retained his tough stance against Iran on Wednesday and said the U.S. is uncertain if Tehran has restarted the nuclear weaponization program that a U.S. intelligence report says it halted in 2003…Critics of the Bush administration said the report should dampen any campaign for a U.S. confrontation with Iran.

But Cheney that that while the NIE said Iran had a program to develop a nuclear warhead, it remains unclear if it has resumed that activity.

“What it (the NIE) says is that they have definitely had in the past a program to develop a nuclear warhead; that it would appear that they stopped that weaponization process in 2003. We don’t know whether or not they’ve restarted,” he said.

Bush too has been pushing this line, most recently in an interview with a government-funded Farsi-language radio station piping White House propaganda into Iran itself. As Dan Froomkin notes, Bush repeated the lie he has often told, asserting that Iran has “declared they want to have a nuclear weapon to destroy people.” Iran has always declared the opposite, of course. Bush also echoed Cheney’s provocative “mystficiation” about the current state of the alleged Iranian weapons program. As Bush put it: “They’ve hidden programs in the past and they may be hiding one now, who knows?”