Brian Kelly and the New SDS 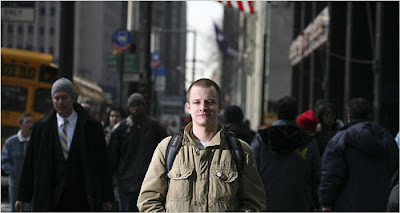 One March morning two years ago, a Pace University freshman named Brian Kelly and a dozen or so friends piled into a few cars and drove to the university’s Westchester County campus in Pleasantville, to attend a speech by former President Bill Clinton.

After the speech, which was part of the university’s centennial celebration, they submitted written questions for Mr. Clinton, as they had been invited to do.

Toward the end of the session, when they did not hear their questions asked of Mr. Clinton, Mr. Kelly tried a different tack.

“A friend and I got up and interrupted as a question about peace and democracy was being put to him by the university president,” he said. “And we said: ‘You’re a war criminal! What about Iraq and Bosnia and so forth?’ ”

Mr. Kelly and his friend were swiftly plucked from the auditorium by Secret Service agents and questioned for nearly an hour in a back room, he said.

Mr. Kelly speaks out a lot about politics these days, and not surprisingly. People like him are the new face of Students for a Democratic Society, the radical group that made headlines so often at the end of the 1960s.

On April 23, 1968 — 40 years ago next month — students at Columbia University, most notably S.D.S. members, took to the streets in the first major protest over the school’s plan to build a gym in Morningside Park; later in the spring, protesting the Vietnam War, the students seized several university buildings. By the time the demonstrators were forced out by the police, more than 700 students had been arrested and 150 had been hospitalized.

In the past few years, S.D.S. has re-emerged. But despite Mr. Kelly’s affiliation with the group and his actions during Mr. Clinton’s speech, he and other members of the new generation of S.D.S. approach politics in a strikingly different way from the firebrands of 1968. Mr. Kelly, for example, who spends much of his time hunched in front of his computer, sometimes sounds more like an earnest sociologist — the subject is his major — than a campus radical intent on scaling the ramparts.

“Society is made up of institutions, and institutions are built on consent,” Mr. Kelly said one recent morning during a wide-ranging conversation at a Starbucks cafe near Union Square. “And if you get people to say, ‘We withdraw our consent, we want new institutions, we want better policies,’ that’s how movements are built.”

The Stereotype, the Reality

“The mass media, with a little help from the older liberals, have painted a tyrannizing caricature of the ‘Student Rioter,’ ” the journalist Jack Newfield wrote in The New York Times in May 1969 in his review of “The Strawberry Statement,” James Simon Kunen’s account of the unrest at Columbia. “He has long dirty hair, an insatiable libido, and a four-letter word vocabulary. He is violent, irrational, anti-democratic.”

Sitting in Starbucks, Mr. Kelly, a clean-shaven, neatly dressed and highly composed 21-year old with close-cropped hair, hardly resembled the stereotypical radicals of 1968. Only the small pin on the lapel of his light brown jacket, depicting a bomb with a red line through it, and another on his shirt, reading “sds,” hinted at his politics.

He chose his words slowly and with a politician’s care, and his lean physique and wholesome demeanor suggested a track team member or an Eagle Scout — both of which Mr. Kelly was when he was growing up in Orange County, N.Y., about 90 minutes north of the city. His father is a computer programmer, his mother sells real estate, and both, he says, have been accepting of his political activities.

“They were a little hesitant after the Clinton thing, but they never asked me not to do anything,” Mr. Kelly said. “I think they understand.”

In high school, he was a student activist who engaged in what he described as “general liberal politics — blood drives, food drives, stuff around Darfur, that kind of thing.”

As a freshman at Pace’s main campus in Lower Manhattan, Mr. Kelly joined the school’s chapter of the Campus Anti-War Network, a national group opposed to the Iraq war. After S.D.S. was revived in January 2006 by two high school students, one from North Carolina, the other from Connecticut, the antiwar chapter became the Pace S.D.S. chapter. Other city schools with S.D.S. chapters include Queens College, New York University, Columbia University, Pratt Institute and New School University, most with about 25 members.

When the Pace chapter was born, Mr. Kelly’s activism really took off and he became, as he put it, “basically a full-time organizer” for the revived S.D.S. But when it comes to his attitude toward the violence of the ’60s, Mr. Kelly will never be mistaken for some of his predecessors.

“I actually think violent action isn’t radical at all,” he said firmly. “Radicals go to the root of the problem, and they want to change society. Violence doesn’t change society, and if it doesn’t go to the root of the problem, it’s not radical.” Mr. Kelly paused. “I don’t know what it is,” he added, “but it has nothing to do with what I want to do.”

Despite his attitude toward violent protest, Mr. Kelly has not shied away from dramatic tactics. He has been arrested twice, once two years ago during a protest on Pace’s Manhattan campus, and once a year ago when he and about 20 other S.D.S. members were detained for occupying an Army-Navy recruiting center in Lower Manhattan. Neither arrest led to any charges.

No charges grew out of Mr. Kelly’s brief face-off with Mr. Clinton either, although the encounter had its unnerving moments.

“We were about 100 feet or so away from the president,” Mr. Kelly recalled. “And it all happened so fast I don’t remember being scared — more kind of nervous. These guys in generic suits just came toward us.”

Although he and his friends were not arrested, Mr. Kelly said that the Secret Service agents who grilled him and his friend called them “clowns” and said they might be held for 72 hours and forced to undergo psychiatric evaluation. Their cars were also searched without their consent, Mr. Kelly said, and their S.D.S. colleagues were questioned.

(Eric Zahren, a Secret Service spokesman, said of the episode, “We have great respect for individual freedoms, specifically freedom of speech, and do not set out to engage individuals who do not pose a threat to protectees. However, that determination in many cases cannot be made without simply speaking to people first.”)

Despite the events of that day, Mr. Kelly said he had never experienced hostility on his campus.

His main goal, he said, “isn’t to take over a building, it isn’t to block a recruitment center. It isn’t to do any of these tactics that people kind of zero in on from the ‘60s. Our biggest goal is to get more people who are politicized, who are progressive, who want to join in a mass movement to help change the world.” Amid the chatter of the cafe and the piped-in music of Sheryl Crow and Frank Sinatra, Mr. Kelly’s phrase hung in the air, a momentary echo from another, more idealistic age.

This entry was posted in RagBlog and tagged SDS, Social Action, The Left. Bookmark the permalink.