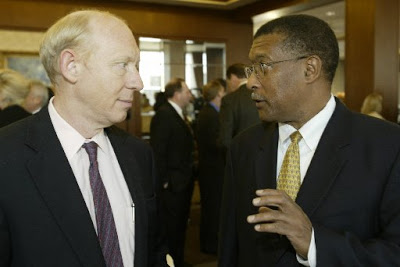 The Democrats: Houston mayor Bill White, left, is expected to make a run for the Senate and Gene Locke is a leading candidate to succeed him as mayor of Houston. Another top mayoral candidate is openly gay City Controller Annise Parker. Photo by Kevin Fujii / Houston Chronicle.
The red and the blue in the Lone Star State:
High hopes for Texas Dems

The elected sheriff of Dallas County is a lesbian Latina. The leading candidates to become mayor of Houston in November include a black man and a gay white woman. The speaker of the House of Representatives is the first Jew to hold the job in 164 years of statehood and only the second speaker to be elected from an urban district in modern times.

In this year’s legislative session, bills to compel women to undergo an ultrasound examination before having an abortion (to bring home to them what they are about to do) and to allow the carrying of guns on campus both fell by the wayside; a bill to increase compensation for people wrongly convicted sailed through. Lakewood, in Houston, the biggest church not just in Texas but in America, claims to welcome gays. As Dorothy in “The Wizard of Oz” might have said, we’re not in Texas any more.

Or at least, not in Texas as we have recently come to know it. A Democratic-voting Texas would be nothing new, but political memories are short, and the blunders of the Bush presidency have coloured global perceptions of what Texas is like. It mostly voted Democratic in presidential elections until 1968, when, alone among the former Confederate states, it went for Hubert Humphrey, and 1976, when it voted for Jimmy Carter. Many of those voters were highly conservative “Dixiecrats” and later flipped to the Republicans. But there has always been a strong radical streak too. William Jennings Bryan was hugely popular in Texas. Jim Hightower, a former Texas agriculture commissioner and the perennial voice of Texas populism, says that “Texas has always been a purple state”—up for grabs by either the red Republicans or the blue Democrats.

It had a Democratic governor, in the feisty and liberal shape of Ann Richards, until as recently as 1995; but since that year, which saw George Bush’s ascent to the governor’s mansion, the Republicans have been firmly in control, and no Democrat has won statewide office. Since 2003 the Republicans have controlled the House as well as the Senate, monopolising every lever of power in the state. Now the pendulum is swinging back.

With no prospect of a local son to vote for in future elections (a Bush has been on the ballot paper for six of the past eight presidential votes), the Republicans have lost one big advantage. In the 2008 election the Democrats did much better all over the state. They won the presidential vote in all the big cities except Fort Worth (see map). They made big inroads into the Republicans’ dominance of the suburbs, where American elections are lost and won these days. Overall they took 44% of the vote, up from 38% in 2004, even though Barack Obama barely campaigned in Texas.

They secured a blocking minority, 12 seats out of 31, in the heavily gerrymandered state Senate, and almost took control of the Texas House of Representatives: the Republicans now hold it by just 76 seats to 74. The conservative speaker was promptly ousted and replaced by Joe Straus, who depended for his election on a sizeable block of Democratic votes.

The mild-mannered and charming Mr Straus has turned out to be a bipartisan and moderate figure, though he insists that he made no promises to the Democrats who backed him. But this year’s legislative session showed the Democrats flexing their muscles in the House, blocking a bill on voter identification that they said discriminated against their supporters.

The rise of the Democrats poses a dilemma for Republicans in Texas, just as it does nationally. And just as the national party seems to be lapsing into fratricide, so a vicious internal war has broken out over the governorship. Rick Perry is running for a third full term in the job, but the main challenge he faces is not from the Democrats who, oddly, have come up with a remarkably unconvincing candidate: Tom Schieffer, who used to be Mr Bush’s business partner and who is famous mainly because his brother is a TV presenter. The real rival is within, in the shape of Kay Bailey Hutchison, probably the most popular politician in the state. Mrs Hutchison has served as one of Texas’s two senators in Washington, DC, since 1993, and was last re-elected in 2006 with 62% of the vote.

Mr Perry has a strong economic record to run on, but because his toughest fight is against a fellow Republican, this has already turned into a battle for the souls of the 600,000 conservative sorts who vote in the Republican primary, due to be held next March. Mr Perry has lurched to the right to woo this atypical electorate.

Thus, he has backed allowing “Choose Life” to be an official Texas car licence-plate motto. This hurts Mrs Hutchison, who is in trouble with social conservatives for having once voted against overturning Roe v Wade, the Supreme Court decision that protects the right to abortion. He has also refused to take up a big chunk of the stimulus funds offered to Texas to help pay unemployment benefit, on the ground that this would create a long-lasting obligation.

No one doubts that Mrs Hutchison would beat Mr Perry or anyone else in Texas in a general election, but recent polls have her lagging behind Mr Perry in the primary. If she does formally enter the race, as expected, she will have to face being branded as a baby-killer and a creature of spendthrift Washington, DC.

Mrs Hutchison insists that “it’s very important that we don’t build a party around an issue [abortion] that is so personal, on which even families disagree.” She is surely right, but primary voters may not see it that way. This race matters hugely to Texas: it is a moment when the state’s Republicans will have to decide which wing of the party they are on.

The Democrats, meanwhile, are pinning their hopes for the 2010 election on securing a majority in the state House of Representatives and on winning a US Senate seat (which may come up sooner if Mrs Hutchison resigns to concentrate on her race for governor). Their chances in the House are good: as the recession starts to bite in Texas, later than elsewhere in the country, support for the Democrats is likely to rise. On the other hand Barack Obama will not be at the head of the ticket in 2010, as he was in 2008—though in Texas he was never quite the draw he was on the coasts.

The steady rise in the Hispanic population, coupled with a slow but continuous increase in Latinos’ tendency to vote, bodes well for the Democrats. George Bush did an impressive job courting the Hispanic vote, but the Republican Party threw that advantage away by rejecting his plans for immigration reform in 2006-07. In the 2008 presidential election Texas Latinos voted Democrat by 63% to 37%. Mr Obama’s nomination of the first Hispanic Supreme Court justice is unlikely to hurt, and nor will his commitment to immigration reform. As Hispanics increasingly spread out across the state they will start to tip the balance in many suburban counties, which is where the big political battles in America are being fought.

In the Senate race the Democrats’ probable candidate will be Bill White, the current mayor of Houston. He has done an excellent job balancing the needs of business with those of his core voters, and he will have a lot of money behind him.

Texas had become used to being at the centre of events, having supplied the president, the vice-president or at least the treasury secretary for all but a handful of the past 50 years. Now it does not even have a senator in the majority party, meaning that Texas has no voice in any of the big deliberations in Washington, DC. That will help the Democrats too.

But it does seem fair to ask what Texas Democrats actually stand for. They say they want more money spent on health and education, but pretty much every politician in Texas says the same, and the party’s leadership shows no appetite for delivering this by taxing Texans more heavily. Hardly anyone seeks to abolish the death penalty, even though, in most years, Texas executes as many people as the rest of America put together. Gun control and recognition of gay marriage are off the table. Everyone has jumped on the renewable-energy bandwagon.

It would, in short, be possible to imagine Texas slipping back to the Democrats without much happening in consequence, except for two considerations. The first is that, should Texas go Democratic at the presidential level, the Republicans nationally would be in deep trouble: with its 34 electoral-college votes, Texas is the only big state they have regularly won in recent presidential elections. The second consideration is the Hispanics. As they become ever more powerful in an ever stronger Democratic Party, there is every chance that they will turn against a model that has left far too many of them behind.

Thanks to Vik Verma / The Rag Blog