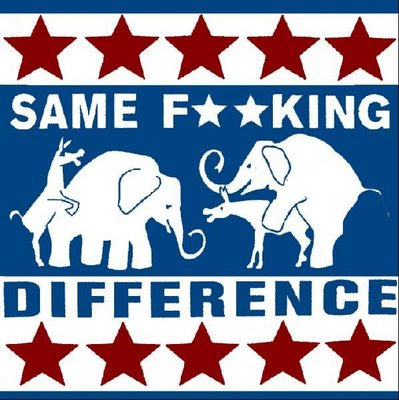 I confess. I believe there is a ruling class that sustains the two-party plutocracy running the nation for the benefit of the rich and corporate class. Their broad strategy is deception and delusion. Tactically, they use government, the mainstream media, the financial services sector, funding of politicians and the two major parties, and many other parts of the culture and economy to maintain their power and control.

Elections do not threaten elites. To the contrary, political debate and elections are important to maintain the illusion and delusion of a real democracy. They are key to prevent outright revolution, marginalize dissidents and political reform efforts, and suppress third parties. Would power plutocrats allow election of a president that threatened their control? Of course not. And no Democratic or Republican presidential candidate ever poses a real threat despite cloaking themselves with labels like maverick, reformer or change agent.

If you accept my worldview, then you know that the ruling class would prefer John McCain over Barack Obama, though they can live with Obama, which is why many, many wealthy people and corporations have poured money into the Obama’s campaign and the recent Democratic convention. The chief disadvantage of Obama and Sarah Palin, from the rulers’ perspective, is their relative brief stints as politicians. It takes time to corrupt politicians and cement their dependency on and membership in the ruling class. In contrast, McCain and Joe Biden clearly have shown themselves reliable in protecting the status quo two-party plutocracy.

The best way to view most current events is through the prism of the ruling class. Take lower gas prices and the federal takeover of the two mortgage giants Fannie Mae and Freddie Mac. Both occurred relatively soon before the general election, as has far better information about the Iraq war. Manipulation and engineering of national and even world events are designed to serve the interests of the ruling class.

Why does deception and delusion work so effectively? When it comes to politics, current events and history, the vast majority of citizens are uninformed, stupid and dumb, regardless of their educational level. As distracted and compulsive consumers, they fall head over hills for political lies and slick campaign rhetoric.

First, consider younger voters. So much talk is about the increased interest in this presidential campaign by younger people, especially evident in the Ron Paul and Obama campaigns. But consider these facts: For those age 18 to 29 just 20 percent read newspapers and just 11 percent regularly surf the Internet for news. Most of what people know about candidates’ positions on the issues comes from what they learn from unreliable and all too often misleading 30-second commercials. Despite far more widespread and extensive schooling, people today possess no more political knowledge than their parents and grandparents. And don’t think that those addicted to The Daily Show and its irreverent view of politics are a lot smarter than those favoring The conservative O’Reilly Factor show. In both groups, only about 54 percent of the shows’ politicized viewers scored in the high knowledge category.

Propaganda and misinformation really work. Just prior to the 2003 invasion of Iraq some 60 percent of Americans believed that Iraq was behind the 9/11 attack. But here is the kicker: A year later there was a wealth of information, including the 9/11 Commission report, saying that Iraq had nothing to do with the 9/11 attack. Yet an amazing 50 percent of Americans still believed that Iraq was to blame, and may still think so. As Rick Shenkman, author of Just How Stupid Are We? Facing the Truth About the American Voter, concluded: “By every measure social scientists have devised, voters are spectacularly uninformed.” Guess who takes advantage of the stupidity of voters, especially younger ones.

The only real difference between Obama and McCain is exactly how they will screw the public and benefit the rich and powerful if elected, not whether they will. If the electorate was really intelligent, they would understand and focus on the similarity between the two, rather than their professed differences. It is what they share – obedience and loyalty to the two-party plutocracy – that matters the most.
two of the same As long as voters do not understand this, the oppression and destruction of the middle class will continue, despite people thinking they are free and live in a democracy.

Mostly, Americans are free to remain vulnerable to deception and delusion.

Democracy for dummies is what we have and what the majority deserve. For the rest of us the difficult challenge is to find ways to fight the political system that are not marginalized and only satisfy our egos. As long as you are an enthusiastic supporter of any Democrat or Republican you are a willing participant in our fake democracy. Most voters persist in believing in the myth that some Democrat or Republican can and will reform the political system, fix the economy, and restore American democracy. They refuse to face the painful truth that this is simply not true. They rather keep embracing the delusional myth.

Consider these wise words of John F. Kennedy: “The great enemy of the truth is very often not the lie – deliberate, contrived, and dishonest, but the myth – persistent, persuasive, and unrealistic. Belief in myths allows the comfort of opinion without the discomfort of thought.”

And so millions of Americans suffering from habitual stupidity will cast their votes confident that they have discovered the truth. Like the march of the penguins diving into icy water without thinking they have any other choice, they succumb to the big myth that this year cost about $1 billion to keep alive. These voters are dummies for democracy. The rest of us will vote for Ralph Nader or some other third party candidate, or refuse to vote at all, and seek ways to ignite the Second American Revolution.

Politicians and media people often praise the smart public and smart voters as if they inevitably make the best, most intelligent and informed electoral decisions. This is sheer hype designed to maintain the political status quo. There is only one smart fact: Every single Democrat and Republican candidate lies. Why do they keep lying? It works.

Joel S. Hirschhorn is the author of Delusional Democracy – Fixing the Republic Without Overthrowing the Government. His current political writings have been greatly influenced by working as a senior staffer for the U.S. Congress and for the National Governors Association. He advocates a Second American Revolution, beginning with an Article V Convention to propose constitutional amendments. He is Chair of the Independent Party of Maryland.

This entry was posted in RagBlog and tagged Electoral politics, PresidentialCampaign. Bookmark the permalink.

2 Responses to Designed to Maintain the Political Status Quo