Despite the Surge, the Iraqi Brain-Drain Continues 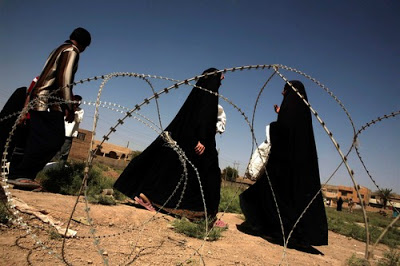 Women carry rice and flour rations that the Iraqi army distributed to returning families in Khan Bani Saad in Diyala province. “We just want people to go back to their normal lives,” said Col. Ali Mahmoud, an Iraqi commander in the area. Photo: Maya Alleruzzo / Associated Press
Iraq too dangerous for many professionals
By Tina Susman / October 5, 2008

The brain drain continues as doctors, professors, engineers and other well-educated, affluent or secular Iraqis flee or stay away, nervous about kidnappings and random violence.

BAGHDAD — Naqi Shakir sits on a sagging mattress pushed against a wall. His wife and two daughters perch on tattered sofas and chairs crowded into the one room of the house with signs of family life: personal photographs tacked to the wall, a TV, books, and knickknacks on dusty shelves.

Except for a folding table and chairs in the kitchen, nearly everything has been sold so the family can bolt as soon as someone rents the two-story home in a relatively safe Baghdad neighborhood.

At a time when the Iraqi government is encouraging its citizens to return and the U.S. military is highlighting security gains across Iraq, the Shakirs want out. They see no future here for Iraqis such as themselves: well educated, affluent, secular or non-Muslim.

Their imminent departure is a major problem facing Iraq, which has suffered a brain drain in the last five years and is struggling to lure back or hang on to educated professionals.

In June, the government raised civil servant salaries 50% to 75% to attract state employees such as teachers and doctors, many of whom were fired after the 2003 U.S.-led invasion that toppled Saddam Hussein. Iraq’s Ministry of Displacement and Migration says tens of thousands of people have returned since last fall.

But more than 2.5 million Iraqis have fled, and the exodus continues. Political and business leaders believe it will be many years before the loss of professionals can be reversed.

The Office of the United Nations High Commissioner for Refugees said it monitored numbers at the main border crossing linking Iraq to Syria from January to July this year and found that 7,200 more Iraqis left than entered. And some say a new U.S. policy opening the door to more Iraqi refugees each year is exacerbating the situation.

“It’s counterproductive,” said Raad Ommar, president of the Iraqi American Chamber of Commerce and Industry in Baghdad. “They’re trying to achieve their goal on one hand of taking Iraqis to the United States, and on the other hand they’re trying to get Iraq stabilized and improve the economy and everything else. The flight of qualified Iraqis is not going to help that.”

After the fall of Hussein, the chamber would get 200 to 300 applications when it placed a newspaper ad seeking a staff attorney, public relations executive, engineer or administrative worker. Now, Ommar is lucky to get 20, usually from people sorely lacking in experience and with checkered resumes resulting from wartime upheavals.

Ommar used to say it would take Iraq a couple of years to recover economically. “Now, if I say five years, I’m not confident,” he said. “I think, in general, people don’t really have much confidence in the future.”

More than 7,000 physicians have left, including virtually all who had 20 years’ or more experience, said Mustafa Hiti, a member of parliament who sits on its health committee. About 600 have returned, he said, but none are the sort of top-flight specialists needed here.

Most specialists were Sunni Arabs who, to achieve their professional status, were members of Hussein’s Baath Party. Even if they did not adhere to its ideology, they were ostracized and forced from their jobs after Hussein was ousted. Now, they do not feel comfortable in a country run by Shiite Muslims, said Hiti, who expressed doubts about the government’s commitment to moving away from the so-called de-Baathification policies.

“Are the parties in the government now willing to give jobs to the right people, or do they see these jobs as political spoils?” Hiti said.

At the Ministry of Higher Education, spokeswoman Siham Shujairi said 6,700 professors had left Iraq and only about 150 had returned. About 300 have been killed.

Shakir, 65, used to make good money as a customs clearing agent, but he closed shop after the 2003 U.S.-led invasion because of security worries. The family smuggled his son out of the country in 2005 after two kidnapping attempts. The Shakirs’ car has been riddled with bullets in a random shooting on a Baghdad street, and a car bomb in the neighborhood damaged their home.

“There is nobody upholding justice here,” Shakir said as a soap opera flickered on the TV and the family’s Pekingese dog ran excited circles across the floor. “You live your life according to chance. Anyone can do anything.”

His daughters Rafah and Raghad, both in their 30s, feel pressure to wear veils outside even though the family is Christian. Rafah Shakir tucks her small cross pendant into her shirt when she goes out.

“I used to have an import-export business. I used to be able to go to my office and work on my own,” said Rafah, who is studying to be a human rights lawyer in Sulaymaniya, in the semiautonomous Kurdistan region of northern Iraq. “I can’t do it anymore. I can’t even wear short sleeves anymore.”

Even though security has improved, professionals continue to be targets of assassinations by extremists who see them as being pro-Western or religious infidels. In addition, the power in Iraq lies with conservative Shiites, and there is no sign that will change any time soon.

Even if provincial elections, considered key to balancing power among Shiites, Sunnis, Kurds and others, take place by early next year, the parties now in power probably will come out on top again. That’s because of name recognition and their appeal to religious voters.

A new election law that awaits final approval seeks to address the issue, banning the use of religious symbols and images on ballots.

This scenario, combined with anger over Iraq’s failing infrastructure and distrust of its stability, does not encourage moderate Muslims such as Ali, 26, who has a medical degree and hopes to immigrate to the United States.

“Nothing is guaranteed. That’s the problem,” said Ali, who asked that his surname not be used to avoid problems with his employer. “Here, everything is possible — but in a negative sense.”

Ali ticked off the frustrations of everyday life: power outages, lack of clean tap water, hours-long waits to buy fuel for cars and generators, and the lack of social life because of most of his friends’ departures and the closure of late-night restaurants, nightclubs, and cinemas.

“Even if it’s safe, if the services are not available it makes life hard,” said Ayad Abdul Ameer, an electrical engineer.

“The gas lines — people just sit there for hours and hours, like they’re dead,” Ali said, growing visibly infuriated as he spoke. “It’s like a Stage 4 cancer,” he said of Iraq’s growing problems.

Ameer returned to Iraq in April after a year abroad but doesn’t plan on staying. He came back because his work visa application was rejected in Oman, and because he needed to repair his house, which had been hit by mortar rounds a couple of months earlier.

Ahmed Farhan, who works as a chef in Scotland, returned to Iraq for the first time in 14 years this month and couldn’t wait to leave again. Even though he and his family are Shiites, Farhan said he found the atmosphere stifling and the sight of armed police and soldiers on street corners unnerving.

“It’s a losing battle,” he said, arguing against the idea that educated Iraqis such as himself are the best hope for reversing the brain drain.

Hiti, the parliament member, has some hope. He is lobbying the health minister to establish a specially protected zone for doctors and their families to live in, in central Baghdad. That could encourage their return, he said. On Monday, the government said doctors would be allowed to carry guns for self-protection. At least 176 physicians have been killed since 2003.

Spokeswoman Shujairi said the Ministry of Higher Education has received hundreds of e-mailed requests from professors outside Iraq who want to know how they can return to their jobs.

Hiti, though, hesitated when asked whether he would encourage Iraqi doctors to come home under the current circumstances.

“I would not give it an absolute ‘yes,’ ” he said, adding that he would prefer his protected zone be finished before doctors return en masse.

“Accidents happen everywhere, but the probability in Iraq is very high.”