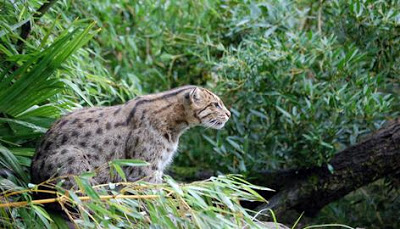 A fishing cat (Prionailurus viverrinus), one of the world’s mammals that is declining in population. More than a third are probably threatened with extinction. Photo by Mathieu Ourioux / AFP / Getty Image.
‘What we are facing is a very rapid, accelerating rate of extinction happening right now that is very unnatural.’
By Dan Vergano / October 6, 2008

Many animals worldwide, from toads to tigers, face extinction, a “terrifying possibility” underlined by the release Monday of a report on mammals.

The International Union for the Conservation of Nature (IUCN) predicted earlier that one in eight bird, one in three amphibian and one in three coral-reef species are endangered.

“Extinction is normal and natural, but what we are facing is a very rapid, accelerating rate of extinction happening right now that is very unnatural,” says IUCN biologist Michael Hoffmann. The mammal report comes as the IUCN — the world’s largest organization of environmental groups, with 11,000 scientist members from 160 nations — opened its yearly meeting in Barcelona. “Our results paint a bleak picture,” he says.

Land mammals face their greatest risk of extinction in South and Southeast Asia, where 79% of monkey and ape species are threatened, the report finds. Forest-cutting and expanded farms are destroying the homes of species such as the fishing cat. Habitats from India to Java are threatened by marsh-clearing.

Sea mammals are under particular threat in the North Atlantic, North Pacific and Southeast Asia, where dolphin species suffer from fishing and pollution because of factory and farm runoff.

“Overall, about 30% of animal species face declines,” says World Wildlife Fund biologist Sybille Klenzendorf, an expert on tiger conservation. Steep declines in the population of marine mammals, such as the Gulf of California’s vaquita porpoise, began a decade ago, she says, while land mammals steadily lost numbers over the century.

“It’s not all doom and gloom,” Hoffmann says. Some species, such as African elephants and black-footed ferrets in North America, have rebounded. With habitat preserves, captive breeding and laws against hunting, many more species could be saved, he says. But the IUCN report notes it lacked data for 836 of the world’s mammal species, possibly because those creatures have become extinct.