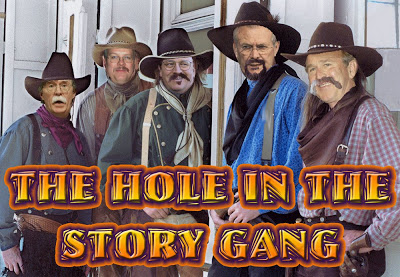 Needless to say, the guy on the right isn’t the gang leader. Photo source.
Dick Cheney’s fantasy world: Despite the facts, the vice-president still insists that Saddam Hussein could have produced weapons of mass destruction
By Scott Ritter / December 16, 2008

In yet another attempt at revisionist history by the outgoing Bush administration, vice-president Dick Cheney, in an exclusive interview with ABC News, took exception to former presidential adviser Karl Rove’s contention that the US would not have gone to war if available intelligence before the invasion had shown Iraq not to possess weapons of mass destruction. Cheney noted that the only thing the US got wrong on Iraq was that there were no stockpiles of WMD at the time of the 2003 invasion. “What they found was that Saddam Hussein still had the capability to produce weapons of mass destruction. He had the technology, he had the people, he had the basic feed stock.”

The vice-president should re-check both his history and his facts. Just prior to President Bush’s decision to invade Iraq, the UN had teams of weapons inspectors operating inside Iraq, blanketing the totality of Iraq’s industrial infrastructure. They found no evidence of either retained WMD, or efforts undertaken by Iraq to reconstitute a WMD manufacturing capability. Whatever dual-use industrial capability that did exist (so-called because the industrial processes involved to produce legitimate civilian or military items could, if modified, be used to produce materials associated with WMD) had been so degraded as a result of economic sanctions and war that any meaningful WMD production was almost moot. To say that Saddam had the capability or the technology to produce WMD at the time of the US invasion is a gross misrepresentation of the facts.

While one can make the argument that Saddam had the people, insofar as the scientists who had participated in the WMD programmes of the 1980s were still in Iraq and, in many cases, still employed by the government, these human resources were irrelevant without either the industrial infrastructure, the economic base or the political direction needed to produce WMD. None of these existed. The argument Cheney makes on feed stock is even more ludicrous. Precursor chemicals used in the lawful manufacture of chemical pesticides were present in Iraq at the time of the invasion, but these were unable to be used in manufacturing the sarin, tabun or VX chemical nerve agents the Bush administration claimed existed inside Iraq in stockpile quantities prior to the invasion.

The same can be said about Iraqi biological capability. The discovery after the invasion of a few vials of botulinum toxin suitable for botox treatments, but unusable for any weapons purposes, does not constitute a feed stock. And as for the smoking gun that the Bush administration did not want to come in the form of a mushroom cloud, there was no nuclear weapons programme in Iraq in any way shape or form, nor had there been since it was dismantled in 1991. Cheney’s dissimilation of the facts surrounding Iraqi WMD serves as a distraction from the reality of the situation. Not only did the entire Bush administration know that the intelligence data about Iraqi WMD was fundamentally flawed prior to the invasion, but they also knew that it did not matter in the end. Bush was going to invade Iraq no matter what the facts proved.

Cheney defended the invasion and subsequent removal of Saddam from power by noting that “this was a bad actor and the country’s better off, the world’s better off with Saddam gone”. This is the argument of the intellectually feeble. It would be very difficult for anyone to articulate that life today is better in Baghdad, Mosul, Basra or any non-Kurdish city than it was under Saddam. Ask the average Iraqi adult female if she is better off today than she was under Saddam, and outside of a few select areas in Kurdistan, the answer will be a resounding “no”.

The occupation of Iraq by the United States is far more brutal, bloody and destructive than anything Saddam ever did during his reign. When one examines the record of the US military in Iraq in terms of private homes brutally invaded, families torn apart and civilians falsely imprisoned (the prison population in Iraq during the US occupation dwarfs that of Saddam’s regime), what is clear is that the only difference between the reign of terror inflicted on the Iraqi people today and under Saddam is that the US has been far less selective in applying terror than Saddam ever was.

At a time when the US and the world struggle with a resurgent Iran, the Iranian-dominated Dawa party of Prime Minister Nuri al-Maliki governs Iraq today in name only. The stability enjoyed by Iraq today has been bought with the presence of 150,000 US troops who have overseen the ethnic cleansing of entire neighbourhoods in cities around Iraq, and who have struck temporary alliances with Shia and Sunni alike which cannot be sustained once these forces leave (as they are scheduled to do by 2011).

Invading Iraq and removing Saddam, the glue that held that nation together as a secular entity, was the worst action the US could have undertaken for the people of Iraq, the Middle East as a whole and indeed the entire world. For Cheney to articulate otherwise, regardless of his fundamentally flawed argument on WMD, only demonstrates the level to which fantasy has intruded into the mind of the vice-president.

This entry was posted in RagBlog and tagged Bush Lies, Cheney. Bookmark the permalink.