Does This Sound Familiar, Or What ?? 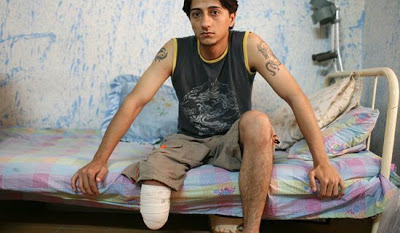 Iraqi policeman Amjed Najen lost his leg in a bombing. “When I lost my leg, I lost my future,” he said. Photo: Michael Kamber for The New York Times
Wounded Iraqi forces say they’ve been abandoned
By Michael Kamber / July 1, 2008

BAGHDAD — Dawoud Ameen, a former Iraqi soldier, lay in bed, his shattered legs splayed before him, worrying about the rent for his family of five.

Ameen’s legs were shredded by shrapnel from a roadside bomb in September 2006 and now, like many wounded members of the Iraqi security forces, he is deeply in debt and struggling to survive. For now, he gets by on $125 a month brought to him by members of his old army unit, charity and whatever his wife, Jinan, can beg from her relatives. But he worries that he could lose even that meager monthly stipend.

In the United States, the issue of war injuries has revolved almost entirely around the care received by the 30,000 wounded American veterans. But Iraqi soldiers and police officers have been wounded in greater numbers, health workers say, and have been treated far worse by their government.

A number of the half-dozen badly wounded Iraqis interviewed for this article said they had been effectively drummed out of the Iraqi security forces without pensions, or were receiving partial pay and in danger of losing even that. Coping with severe injuries, and often amputations, they have been forced to pay for private doctors or turn to Iraq’s failing public hospitals, which as recently as a year ago were controlled by militias that kidnapped and killed patients — particularly security personnel from rival units.

No one knows the exact number of wounded Iraqi veterans, as the government does not keep track. In a 2006 report by the congressional Research Service, Major General Joseph Peterson, the American commander in charge of Iraqi police training, said that in just two years, from September 2004 to October 2006, about 4,000 Iraqi police officers were killed and 8,000 were wounded.

That number does not include soldiers in the Iraqi Army, who are far more numerous than the police and, Iraqi commanders say, have suffered injuries at a far greater rate.

In a February 2006 speech to the Council on Foreign Relations, the report states, Donald Rumsfeld, then the secretary of defense, said that Iraqi security forces were being killed and wounded at “roughly twice the rate of all coalition forces.” If that rate held up, the number of wounded Iraqi veterans might well surpass 60,000.

Iraqi government officials say that the wounded are being treated well, and that a law providing for veterans’ care is being drafted. In the interim, they said, wounded veterans would receive their full salaries from the Ministry of Defense.

“The wounded soldiers from the MOD still get their salaries after the incidents, depending on the reports from the medical committees,” said a spokesman for the Defense Ministry, Staff Major General Muhammad al-Askari. “We are waiting for the Service and Pension Law for the veterans from the Iraqi Parliament, but they still get paid during that time.”

The veterans interviewed for this article disputed Askari’s statement and said they were paid only a fraction of their salaries, or nothing at all. They described the government’s treatment of them as at best indifferent and at worst vindictive.

On the day United States forces arrived in Baghdad in April 2003, Hussein Ali Hassan, a sergeant in Saddam Hussein’s army, was hit by a tank round. With his legs crushed and burns covering much of his body, Hassan was taken to a Baghdad hospital, where his left leg was quickly amputated.

But in the chaos that broke out after the fall of the Hussein government, the staff fled the hospital. “The looters stole beds and ripped the pipes from the walls around me,” Hassan said.

His friends and family cared for him until the staff trickled back. Weeks later, after doctors told him the hospital was rife with infectious bacteria, his family hastily took him home.

An Italian organization was arranging a visa so that Hassan could fly to Italy for care. But with violence rapidly mounting in the fall of 2003, the group closed its doors before the visa request could be completed.

In need of more surgery, Hassan borrowed money and embarked on a series of operations at Al Jabechi, a private hospital in Baghdad, eventually spending about $13,000 of his own money, he said.

“I could have waited months in the public hospitals, and the care is very bad there,” he said.

Hassan says that in the five years since he was wounded, his repeated requests for a disability pension have been ignored. Two weeks ago, however, he learned that he had been awarded a pension of about $165 a month for his 23 years of military service (though nothing for medical care and no acknowledgment that he is disabled, he said).

Read all of it here. / International Herald Tribune