Domestic Spying : FBI to Get Freer Rein to Look for Terrorism Suspects 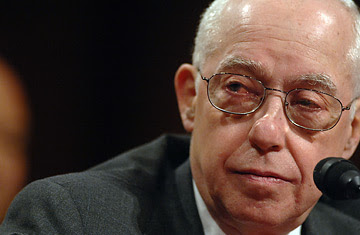 Mukasey said he expected criticism of the new rules because “they expressly authorize the FBI to engage in intelligence collection inside the United States.” However, he said the criticism would be misplaced because the bureau has long had authority to do so.

“There was clear-eyed and bipartisan recognition after the attacks that we needed to be able — and allowed — to collect intelligence in the United States,” he said in speech prepared for an anti-terrorism conference in Portland, Ore. “Indeed, there was a loud demand for it.”

Noting one area that needs to change, he said agents currently can rely on informants to gather information in ordinary criminal investigations, but are more limited in national security cases. The new rules, he said, will do away with those differences.

“Under the new guidelines, the investigative steps that the FBI may take in a particular investigation will not be driven by irrelevant factors, such as the type of paperwork the agent uses to open the investigation,” he said.

In addition, agents assigned to national security investigations will be given more latitude to conduct surveillance based on a tip. Also, agents will be permitted to search more databases than allowed previously in criminal cases. As it stands now, agents who get a tip about a possible organized crime figure cannot use certain databases that they are allowed to access in national security cases, such as those containing information about state-issued drivers’ licenses.

The Justice Department has kept the draft rules under wraps for at least a month and is expected to publicly release the final version within several more weeks. Even then, portions are expected to remain classified for national security reasons.

Mukasey said he planned to consult with Congress about the rules before releasing them. Nonetheless, Mukasey provided enough detail Wednesday to alarm civil libertarians.

Michael German, a former veteran FBI agent who is now policy counsel for the American Civil Liberties Union, said if Mukasey moves ahead with the new rules as he describes them, he’ll be weakening restrictions originally put in place after the Watergate scandal to rein in the FBI’s domestic Counter Intelligence Program, or COINTELPRO. At the time, the FBI spied on American political leaders and organizations deemed to be subversive throughout the late 1950s and into the 1960s.

“I’m concerned with the way the attorney general frames the problem,” German said. “He talks about ‘arbitrary or irrelevant differences’ between criminal and national security investigations but these were corrections originally designed to prevent the type of overreach the FBI engaged in for years.”

The Justice Department’s Inspector General has found that between 2003 and 2006 the FBI sought personal records of Americans by relying improperly on so-called “national security letters”, rather than seeking court approval. Last week, the FBI apologized to two newspapers for secretly obtaining reporters’ phone records without following proper bureau procedures.

FBI officials have said the bureau has since instituted stronger oversight to prevent abuses, but German said recent events demonstrated that Mukasey needed to strengthen the FBI’s guidelines, not “water them down.”

“Nobody’s complaining about the FBI collecting domestic intelligence when it’s appropriate and authorized under the law,” German said. “What the attorney general is doing is expanding the bureau’s intelligence collection without addressing the mismanagement within the FBI. If you have an agency collecting more with less oversight, it’s only going to get worse.”

Mukasey denied that the new rules would allow agents to investigate someone simply based on race, religion or exercise of First Amendment rights.

Earlier, the Associated Press had reported that Mukasey was considering allowing agents to investigate someone based on a terrorism profile that could rely on race or ethnicity as a factor.

However, Mukasey did not say whether the new guidelines would give the FBI more leeway to rely on race or ethnicity as a significant factor in determining whether an investigation should be launched.