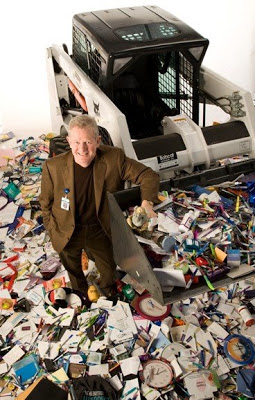 WASHINGTON — In a scolding report, the nation’s most influential medical advisory group said that doctors should stop taking much of the money, gifts and free drug samples that they routinely accept from drug and device companies.

The report by the Institute of Medicine, part of the National Academy of Sciences, is a stinging indictment of many of the most common means by which drug and device makers endear themselves to doctors, medical schools and hospitals.

“It is time for medical schools to end a number of long-accepted relationships and practices that create conflicts of interest, threaten the integrity of their missions and their reputations, and put public trust in jeopardy,” the report concluded.

The institute’s report is even more damning than a similar one released last year by the Association of American Medical Colleges, which proposed tough new rules governing interactions between companies and medical schools.

In the wake of the association’s report, many schools and medical societies toughened their policies. The institute’s imprimatur is certain to accelerate this process.

“With the I.O.M.’s endorsement, issues that were once controversial now are indisputable,” said Dr. David Rothman, president of the Institute on Medicine as a Profession at Columbia University. “Conflicts of interest in medicine are no longer acceptable.”

Both senators said they welcomed the institute’s endorsement.

“It’s a shot in the arm to the reform movement to have the prestige and policy heft of the Institute of Medicine on the side of transparency,” Mr. Grassley said. “The more disclosure, the better, for holding the system accountable and building public confidence in medical research and practice.”

Drug companies spend billions of dollars wooing doctors — more than they spend on research or consumer advertising. Much of this money is spent on giving doctors free drug samples, free food, free medical refresher courses and payments for marketing lectures. The institute’s report recommends that nearly all of these efforts end.

The largest drug makers agreed last year to stop giving doctors pens, pads and other gifts of small value, but company executives have defended other marketing tactics as valuable to both doctors and patients. Medical device and biotechnology companies have yet to swear off even pens and free trips.

A 2007 survey found that more than three-quarters of doctors accept free drug samples and free food, more than a third get financial help for medical refresher courses and more than a quarter get paid for giving marketing lectures and enrolling patients in clinical trials

Among the most controversial of the institute’s recommendations is a plan to end industry influence over medical refresher courses. Presently, drug and device makers provide about half of the funding for such courses so that doctors can often take them for free. Even as they have acknowledged the need for other limits, many medical societies and schools have defended subsidies for education as necessary.

“As science progresses, it’s going to get harder and harder to get doctors to keep pace,” said Dr. Jack Lewin, chief executive of the American College of Cardiology. “I think industry has some responsibility toward education.”

By contrast, the American Psychiatric Association recently announced that it would phase out industry funding for medical refresher courses at its conventions.

The institute acknowledged that many doctors depend on industry funding for refresher medical courses but said that “the current system of funding is unacceptable and should not continue.” The report recommended that a different funding system be created within two years.

Senator Kohl said that he has been investigating refresher medical courses, and he said the industry’s funding has biased some courses.

Dr. Bernard Lo, the director of the Program in Medical Ethics at University of California San Francisco who served on the institute’s committee that wrote the report, said in an interview that doctors “need to do a better job in addressing conflicts of interest that would lead to bias or threaten public trust.”

Dr. P. Roy Vagelos, a former Merck chief executive, said that he has worried for years that drug and device companies wielded too much influence over doctors.

“I think medical centers and companies will start to listen to these recommendations and to take them very seriously,” Dr. Vagelos said.

2 Responses to Drug Company Gifts to Doctors: Staunching the Flow