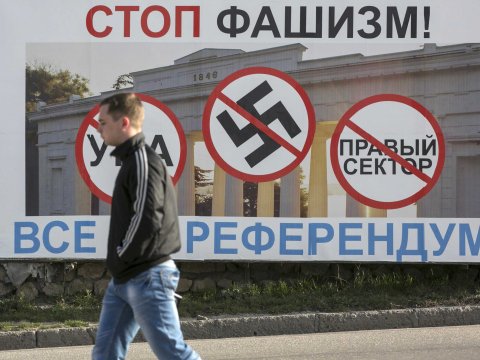 A man walks past a billboard in Crimea that reads, “Stop Fascism.” Photo by Baz Ratner / Reuters.

Russia has based its naval fleet at Sevastopol in Crimea since 1783. After Ukraine got its independence in 1991 it signed a partition treaty with Russia in 1997 that allowed Russia to maintain its naval base and two air bases and station as many as 25,000 troops in Crimea.

Russia is less than 10 miles across the Black Sea from Crimea.

It is instructive in this present conflict to remember the first Big Power play in this area: The Crimean War from 1853 to 1856. Fought ostensibly over whether French Catholic or Russian Orthodox priests should control the Christian shrines in Palestine, the battle was really over whether Russia or Europe would control the Middle East.

France sent its newest battleship, Charlemagne, into the Black Sea and it was game over. The French securely tied up Lebanon and Syria, and the British solidified their opium trade in Afghanistan so they could force it on China in the Second Opium War in 1856.

These are questions that are answered without rhyme or reason or the rule of law.

These are questions that are answered without rhyme or reason or the rule of law but answerable only to the interests of the big powers, and, “political power grows out of the barrel of a gun.”

What’s going to happen to Crimea and the Ukraine?

Crimea will probably end up as part of Russia where, for all practical purposes, it’s been for the last 230 years.

The Ukraine will probably move into the Western orbit. Like an abandoned crack house in a poor neighborhood, the banks are moving in to foreclose.

It all started when the President of the Ukraine wanted to sign an agreement with Russia to get $15 billion to pay some bills in exchange for not signing an agreement with the European Union for closer economic ties. There were demonstrations that quickly turned violent.

No one can say for sure who was at fault. Russia claims the U. S. intervened and provoked the crisis, and it is certain that Nazi militias are now in control of much of the area in Kiev. There is a sizable Russian minority in the Ukraine, as well as Jewish and Muslim Tatar minorities. The Nazis want them all out: “Ukraine for the Ukrainians.” Now it looks like there will be closer ties with the E. U., and no one knows exactly what that will mean.

The International Monetary Fund (IMF) is willing to offer $15 billion in loans and grants over the next few years but only under certain conditions. Like with Greece, they will want money that the Ukraine was going to spend on pensions, salaries for government workers and teachers. They will wring every cent they can out of government workers. They will raise taxes and raise the price of utilities.

In a special arrangement, the E. U. has offered to sell the Ukraine natural gas that they buy from Russia. Normally, Russia sells gas to the Ukraine and Europe at a discount, but the Ukraine owes Russia nearly $2 two billion in unpaid gas bills, so Russia is threatening to eliminate the discount until they get paid. So, the E. U. is offering to sell the Ukraine Russian gas through the back door.

What could go wrong with that?

The Ukrainian economy is in shambles. There are 10 oligarchs who control the economy and have stolen all they could move and mortgaged everything that was nailed down. They make the kleptocrats in Greece look like boy scouts. Of course the criminal oligarchs will be asked to partner with the IMF, and the working people of the Ukraine will be asked to bear the suffering.

And, as the conditions worsen, the Nazis will blame the Russians, the Jews, and the Tatars. The fascist Golden Dawn arose in Greece under just such conditions, and it’s likely that this situation will only get worse in the Ukraine. Currently, the Right Sector, an overtly Nazi organization, is in the coalition government and in control of the Armed Forces; they have a deputy prime minister and a deputy in charge of national security, justice, and education.

There has always been fighting between the left and the right in the Ukraine, between Communists and Nazis and between Russians and native Ukrainians.

There has always been fighting between the left and the right in the Ukraine, between Communists and Nazis and between Russians and native Ukrainians. Up until World War I the Ukraine was part of Russia, then after World War I right-wing elements who were supported by the Western Powers began a Civil War.

By 1922 the West had interfered in the social democratic governments of all the countries in Eastern Europe and changed all of them from democracies to fascist military states. But they were not successful in the Ukraine, and, after the victory of the Red Army, it became a Soviet Republic. But there were many right-wing, pro-Western elements still active in the Ukraine, and when Hitler invaded in 1941 they greeted him as a liberator.

Of course, people in the U. S. are very confused. Hillary Clinton (who usually isn’t saying anything about anything these days) called Putin “Hitler.” And John McCain flew into Kiev to stand next to and support Oleh Tyahnybok, the leader of the neo-Nazi Party. Tyahnybok had said earlier that Ukraine’s problems were caused by a “Muscovite-Jewish mafia” which sounds a lot like the “International Jewish Conspiracy” that the Nazis used to justify genocide in World War II.

Is that the future? Do we have more to fear from John McCain and his “Straight Talk Express” and his charming sidekick, the cockroach from the Palmetto State, Lindsay Graham, and from the Ukrainian Nazis, than we do from Putin?

In a warrior culture souped up on violence, peace is never sexy.

Stay tuned! This could get worse.

[Ed Felien is publisher and editor of Southside Pride, a South Minneapolis monthly where a version of this article also appears. ]