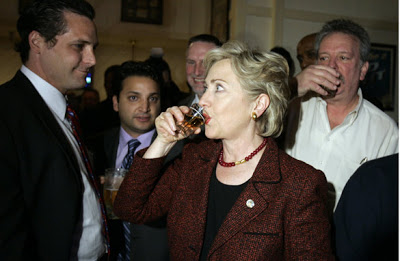 In Friday’s New York Times, Susan Faludi rejoiced over Hillary Clinton’s destruction of the myth of female prissiness and innate moral superiority, hailing Clinton’s “no-holds-barred pugnacity” and her media reputation as “nasty” and “ruthless.” Future female presidential candidates will owe a lot to the race of 2008, Faludi wrote, “when Hillary Clinton broke through the glass floor and got down with the boys.”

I share Faludi’s glee — up to a point. Surely no one will ever dare argue that women lack the temperament for political combat. But by running a racially-tinged campaign, lying about her foreign policy experience, and repeatedly seeming to favor McCain over her Democratic opponent, Clinton didn’t just break through the “glass floor,” she set a new low for floors in general, and would, if she could have got within arm’s reach, have rubbed the broken glass into Obama’s face.

A mere decade ago Francis Fukuyama fretted in Foreign Affairs that the world was too dangerous for the West to be entrusted to graying female leaders, whose aversion to violence was, as he established with numerous examples from chimpanzee society, “rooted in biology.” The counter-example of Margaret Thatcher, perhaps the first of head of state to start a war for the sole purpose of pumping up her approval ratings, led him to concede that “biology is not destiny.” But it was still a good reason to vote for a prehistoric-style club-wielding male.

Not to worry though, Francis. Far from being the stereotypical feminist-pacifist of your imagination, the woman to get closest to the Oval Office has promised to “obliterate” the toddlers of Tehran — along, of course, with the bomb-builders and Hezbollah supporters. Earlier on, Clinton foreswore even talking to presumptive bad guys, although women are supposed to be the talk addicts of the species. Watch out — was her distinctly unladylike message to Hugo Chavez, Kim Jong-Il, and the rest of them — or I’ll rip you a new one.

There’s a reason why it’s been so easy for men to overlook women’s capacity for aggression. As every student of Women’s Studies 101 knows, what’s called aggression in men is usually trivialized as “bitchiness” in women: Men get angry; women suffer from bouts of inexplicable, hormonally-driven, hostility. So give Clinton credit for defying the belittling stereotype: She’s been visibly angry for months, if not decades, and it can’t all have been PMS.

But did we really need another lesson in the female capacity for ruthless aggression? Any illusions I had about the innate moral superiority of women ended four years ago with Abu Ghraib. Recall that three out of the five prison guards prosecuted for the torture and sexual humiliation of prisoners were women. The prison was directed by a woman, Gen. Janis Karpinski, and the top U.S. intelligence officer in Iraq, who also was responsible for reviewing the status of detainees before their release, was Major Gen. Barbara Fast. Not to mention that the U.S. official ultimately responsible for managing the occupation of Iraq at the time was Condoleezza Rice.

Whatever violent and evil things men can do, women can do too, and if the capacity for cruelty is a criterion for leadership, as Fukuyama suggested, then Lynndie England should consider following up her stint in the brig with a run for the Senate.

It’s important — even kind of exhilarating — for women to embrace their inner bitch, but the point should be to expand our sense of human possibility, not to enshrine aggression as a virtue. Women can behave like the warrior queen Boadicea, credited with slaughtering 70,000, many of them civilians, or like Margaret Thatcher, who attempted to dismantle the British welfare state. Men, for their part, are free to take as their role models the pacifist leaders Martin Luther King and Mahatma Gandhi. Biology conditions us in all kinds of ways we might not even be aware of yet. But virtue is always a choice.

Hillary Clinton smashed the myth of innate female moral superiority in the worst possible way — by demonstrating female moral inferiority. We didn’t really need her racial innuendos and free-floating bellicosity to establish that women aren’t wimps. As a generation of young feminists realizes, the values once thought to be uniquely and genetically female — such as compassion and an aversion to violence — can be found in either sex, and sometimes it’s a man who best upholds them.

This entry was posted in RagBlog and tagged Hillary, Presidential Campaign, Women. Bookmark the permalink.