Stop the Destructive Rhetoric About Iran

We already wrote about this a couple of days ago. However, the signs of impending attack against Iran remain quite ominous (see also here and here).

We expect to publish more about this tonight or tomorrow. 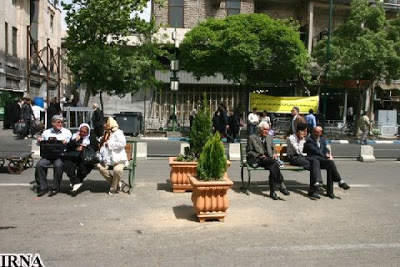 People live in Tehran, too.

Quiet US Confession: Weapons Were Not Made In Iran After All
By CASMII / May 12, 2008

In a sharp reversal of its longstanding accusations against Iran arming militants in Iraq , the US military has made an unprecedented albeit quiet confession: the weapons they had recently found in Iraq were not made in Iran at all.

According to a report by the LA Times correspondent Tina Susman in Baghdad: “A plan to show some alleged Iranian-supplied explosives to journalists last week in Karbala and then destroy them was cancelled after the United States realized none of them was from Iran. A U.S. military spokesman attributed the confusion to a misunderstanding that emerged after an Iraqi Army general in Karbala erroneously reported the items were of Iranian origin. When U.S. explosives experts went to investigate, they discovered they were not Iranian after all.”

The US, which until two weeks ago had never provided any proof for its allegations, finally handed over its “evidence” of the Iranian origin of these weapons to the Iraqi government. Last week, an Iraqi delegation to Iran presented the US “evidence” to Iranian officials. According to Al-Abadi, a parliament member from the ruling United Iraqi Alliance who was on the delegation, the Iranian officials totally refuted “training, financing and arming” militant groups in Iraq . Consequently the Iraqi government announced that there is no hard evidence against Iran.

In another extraordinary event this week, the US spokesman in Iraq, Maj. Gen. Kevin Bergner, for the first time did not blame Iran for the violence in Iraq and in fact did not make any reference to Iran at all in his introductory remarks to the world media on Wednesday when he described the large arsenal of weapons found by Iraqi forces in Karbala.

In contrast, the Pentagon in August 2007 admitted that it had lost track of a third of the weapons distributed to the Iraqi security forces in 2004/2005. The 190,000 assault rifles and pistols roam free in Iraqi streets today.

In the past year, the US leaders have been relentless in propagating their charges of Iranian meddling and fomenting violence in Iraq and since the release of the key judgments of the US National Intelligence Estimate in December that Iran does not have a nuclear weaponisation programme, these accusations have sharply intensified.

The US charges of Iranian interference in Iraq too have now collapsed. Any threat of military strike against Iran is in violation of the UN charter and the IAEA’s continued supervision on Iran’s uranium enrichment facilities means there is no justification for sanctions.

CASMII calls on the US to change course and enter into comprehensive and unconditional negotiations with Iran.

For more information or to contact the Committee Against Sanctions and Military Intervention in Iran (CASMII) please visit http://www.campaigniran.org/.

This entry was posted in RagBlog and tagged Iran, Military. Bookmark the permalink.