ICE’s ‘South Texas Family Residential Center,’ run by CCA, is the largest such facility in the country.

Demonstration to #EndFamilyDetention at Dilley, Texas, May 2, 2015.
Photo © Steve Pavey.

DILLEY, Texas — I’ve been hearing about Dilley, Texas, for years. My friend, Andy, is from there. He told stories of this small town in the middle of nowhere (but very close to the border) and the escapades of his group of artist/outsider friends and how they survived growing up there.

Then last year those of us in the immigrant rights/end detention circles started hearing about the property in Dilley owned by Red McCombs, a “man camp” for the oil and gas workers who had been working there for many years. Extracting and polluting, taking out and leaving filth in the air and water.

Now it was going to be leased to ICE — the U.S. Immigration and Customs Enforcement — to build what they envisioned as the largest family detention center for immigrants in these United States. Close to the border, over an hour from San Antonio, 2 ½ hours from Austin, Dilley fit the ICE agenda perfectly. Make it hard for activists and lawyers to visit and right in the middle of the Eagle Ford Shale. Greed and fouling of the earth alongside human rights violations, racism, and cruelty to mothers and children. A perfect ambiance for Orcs and Disaster Capitalists. Enter the Corrections Corporation of America, stage right.

For a while we imagined shaming Red McCombs into abstaining from the chance for big profit in leasing his property to the CCA. Some clever person at Grassroots Leadership suggested we offer to hold a bake sale for Red McCombs, to compensate him for any losses were he to pull out of the deal. But pull out of the deal he did — in some fancy Texas two-step with a sale and transference of titles and suddenly he was not responsible. Sorry, Ma’m, but it didn’t happen on my land…

So the CCA came in and did a bright and shiny renovation — and soon enough Dilley was open for the business of incarcerating asylum seeking women and children from El Salvador, Honduras, and Guatemala. They thought, perhaps, “out of sight, out of mind.”

Boy, were they wrong.

Hundreds came to Diley to show their solidarity with the women and children being held there.

On Saturday, May 2, 2015, hundreds of people came to Dilley to show their solidarity with the women and children being held there. Bus loads from San Antonio, Austin, the Rio Grande Valley, and Houston. I was originally going to go on one of the buses but when Jennifer Long, the director of Casa Marianella, invited me to join her and other staff members, I readily agreed. After completing the 2 1/2  hour trek down IH 35, we found the park on Commerce and found ourselves scrambling for a space among the scores of cars. Then I began to see friends — from all over.

First I spotted Sister Pam, recently relocated to Falfurrias, a team member of the South Texas Human Rights Center and currently wrestling with the bureaucracy (the first defense of the ethically challenged) of GEO so that she may visit immigrants in the Brooks County Detention Center. She’s tough stuff, is Sister Pam, a sister of Notre Dame from Ohio with Polish Immigrant roots. Already friends with Jennifer and the Casa Marianella team, she beamed and in her bright yellow shirt, was a beacon.

She wasn’t the only one in a bright yellow shirt. In from Orange County, California, was Jan Meslin, staff member of CIVIC (Community Initiatives for Visiting Immigrants in Confinement) doing double duty in her yellow t-shirt worn by so many of my friends who are Unitarians. It was hard to walk from the parking spot to the park, as I had to stop and greet and be greeted by friends from everywhere.

If the word ‘interfaith’ ever had meaning, it was incarnate in the May 2 protest.

If the word “interfaith” ever had meaning, it was incarnate in the May 2 protest against family detention. There were busloads of Presbyterians, nuns and priests, Methodist women (and presumably, men) a couple of Franciscan friars, Quakers, Muslims, Jews, Buddhists and no doubt a fair share of agnostics, atheists, and pagans. No one likes family detention. No one with a heart or a soul.

Which is probably why those who defend family detention are the shareholders of private prison stock, the carrion who lobby for them in Congress, the purveyors of arms, fear mongers, Republisaurs, and old-timey racists.

Before the march started I had gone for cover from the sun to a nice cupola in the park. It was there that I met three men from Honduras. It took me a moment to notice that they all had prosthetics. One had been released from the Pearsall Detention Center just the day before.

I quickly offered them coffee from the thermos I had carried from Austin. One drank from the thermos cup and the other fashioned one from the bottom half of an empty plastic water container. The thermos cup was washed and passed to the third, so that he might drink. I passed out banana bread made by Lynnette, who had flown in from Santa Barbara. For a few moments we talked about their situation.

They had all lost limbs traveling on the train that has become known as la Bestia, the Beast. They told me that there were at least 700 or perhaps 1,000 like them – and that was only in Honduras. How many more were back in El Salvador and Guatemala?

A few years ago, the Trinity United Methodist Church in Austin invited members of TUFF (Texans United for Families — organized in the original fight to close family detention in Hutto years back) to lead a Wednesday evening film series on immigration. Alejandro Caceres, of the Austin Immigrant Rights Coalition and I volunteered. The first film we presented was la Bestia. Though I had listened to women who had ridden on la Bestia, it was on May 2, in Dilley, that I had actually met anyone who had lost limbs. 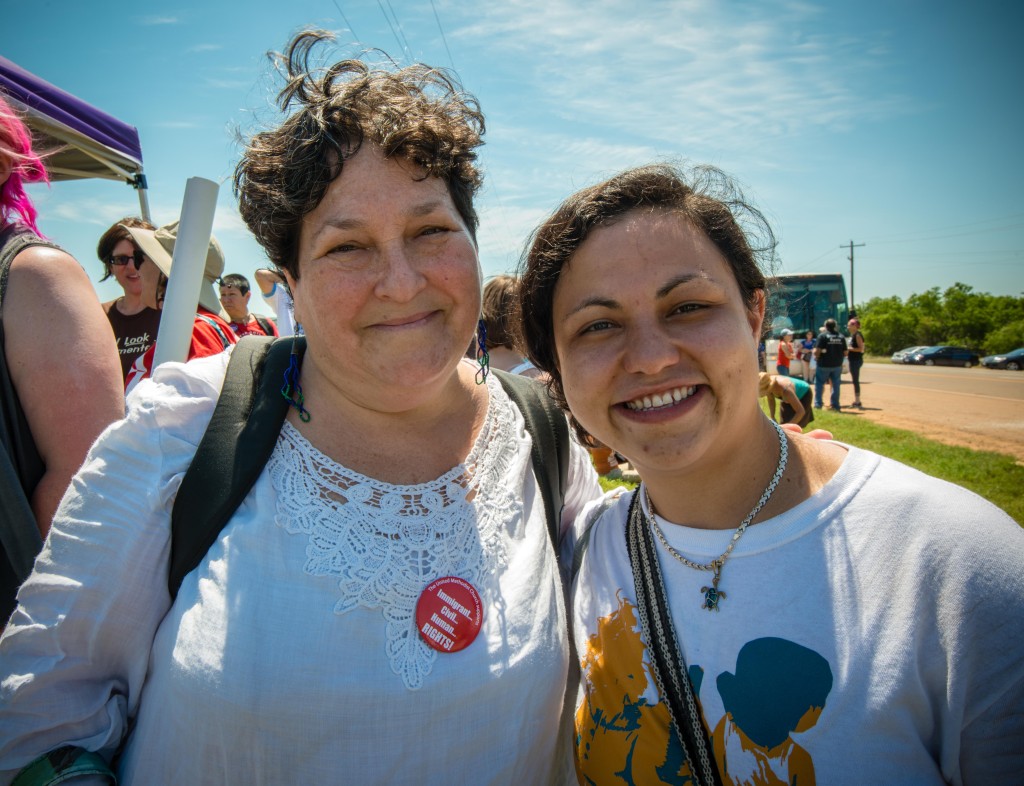 At the rally I saw people I knew not only from California and DC, but companeros from all corners of Austin and San Antonio. There was Rebecca Flores, colega of Cesar Chavez and the farmworkers, who I first met in the waiting area at Karnes; Sarah Cheatham, with her wonderful pink hair, of the Treasure City Collective; Abbie, a spirited first grader who marched the entire way with her mother, Sophia; lots of Austin friends from TUFF, the Hutto Visitation Program and the Austin Immigrant Rights Coalition; more Ministers and lay people from San Antonio’s awesome Interfaith Welcome Coalition; students from UT, Southwestern, and Texas State; lawyers, lots of lawyers, including the indefatigable Barbara Hines, the new staff attorney sent by AILA to work at Dilley; Linda Brandmiller, who has taken on the cases of women at Karnes whose situations seem impossible, but she keeps filing, motion after motion, not giving up; and hundreds more that I was delighted to see but didn’t recognize.

Delighted because that meant that this movement to end family detention is growing.

It might be that 700 people in Dilley, Texas, shouted loud enough that the hearing-challenged in Washington might actually have heard.

The other day I received a wonderful email from Abby Anna Batko-Taylor, one of the young immigration attorneys nurtured by Barbara Hines. According to her, Homeland Security Secretary Jeh Johnson has indicated that the Obama Administration is reevaluating its family policies. It may have had something to do with a just-released 22 page tentative ruling distributed by U.S. District Judge Dolly Gee. Something about ruling against the federal government — halting family detention — and violation of a decades old settlement about the rights of immigrant children.

Is the scale of justice finally tipping toward the end of immigrant detention?

And now, all these people showing up in Dilley on May 2. Is it possible that this is what was really meant when old activists talked about an harmonic convergence? Is the scale of justice finally tipping toward the end of immigrant detention? 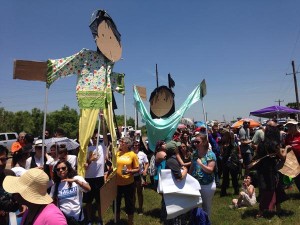 Everyone is outraged at the thought of small children and their exhausted, frightened mothers being imprisoned for the profit of those who drive empty-hearted immigration policy. But when all the family detention centers are closed (Berks, Karnes, and Dilley) we must not let GEO and CCA continue to profit and merely re-tool and place adult women and men in the then empty cells.

Today I am tasked with telling something about May 2 in Dilley. For more information and how you can better understand the evil of the 34,000 bed mandate, please contact my friends at Grassroots Leadership, the Austin Immigrant Rights Coalition, Casa Marianella, the ACLU Immigrants’ Rights Project , CIVIC, Detention Watch Network or the social action networks of your particular faith or community connection.

The Honduran men, missing arms and legs, that I met in Dilley were not angry or bitter. They were grateful to drink coffee and eat homemade bread. In conversations with my friends at Casa Marianella and those who visit we are more and more cognizant that the next questions to be addressed will be how can we welcome these strangers amongst us? How can we offer solidarity to those fleeing violence and persecution once they are granted the asylum they deserve?

Roll up your sleeves, my friends. May 2 was like clearing the land for a great planting. It may be that we must gather a few more times — at Dilley — at Karnes — at Berks — and then at all the other gulags with names like Pearsall, Port Isabel, and Hutto.

It may be a long, hot summer in Texas. Time for a new straw hat.