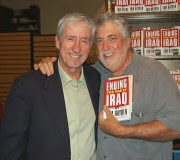 Ending The War In Iraq – Hayden On Organizing Against Permanent War
June 24th, 2007 by Thomas Good

New York, NY – June 18, 2007. On Monday, June 18th, Tom Hayden spoke at Barnes and Noble in the Village to promote his new book: Ending The War In Iraq. Hayden has formulated a theory of the origins of the war: the US ‘Machiavellian State’, and what sustains it; ‘pillars of support’. Part of this formulation is the need to “build a
long-term anti-empire, pro-democracy movement as permanent force” to end the present war and prevent future relapses {1}. The talk given at B&N, from an obviously exhausted Hayden (jet lag), discussed his personal bitterness at how the two major wars that haunt modern US memory have stolen years of his life (and diverted his attention from other struggles), how essential it is to stay focused on attainable goals and how it’s ok to win. He also offered a strategy to attain victory. Although he described himself as a “politician” several times – as opposed to characterizing himself as a “Movement person” (which is the term he employed a year ago) he seemed to do so with a certain wry humor. Humor permeated the event – which, like the new book, drove home the point that the long struggle ahead requires well trained organizers – and a thoughtful approach.

Hayden arrived late to the event – it was announced that he was stuck in traffic. When he walked to the podium he remarked that he was very jetlagged and may not have answers to the question of ending the Iraq War but immediately began addressing the issue in his usual sardonic and erudite manner. Hayden expressed his own frustration that the US war on Viet Nam had interrupted his organizing efforts in another war – the war on poverty. He remarked that the Iraq War produced similar feelings. But he also noted that we have to make a commitment to ending this obscene war – not just for humanitarian reasons but “because we can win” – and that winning can help us prevent future wars. He went on to note that there were many similarities to the US war on Viet Nam but many differences too and that this latest manifestion of Capital’s war on civilization could be ended without “blood in the streets”. He commented that the Peace Movement was far more successful in mobilizing against this war than it was mobilizing against the Viet Nam war, forty years ago. Hayden cited a number of developments that indicated that while George Bush the first may have announced a cure for the “Vietnam Syndrome”, reports of its demise were premature. The evidence is to be found in the emergence of a number of related phenomena: people in the streets before the war started; the rise of alternative media – Democracy Now being one example; the effect of the internet on organizing as evidenced by Howard Dean and MoveOn.org; and the ousting of the morally bankrupt Republican majority in November, 2006. Hayden spent some time reminding the large crowd that, just as activists in the 60s felt they were ineffective our own feelings of impotence are not accurate. The problem, according to Hayden, is that we don’t know how to accept that we have won occasional victories. He joked that anytime we win, as with last November’s trouncing of the Republicans, we have an “identity crisis” – asking ourselves “have we sold out – by getting majority status?” (in public opinion) rather than reveling in a victory – and learning from it. “That leaves one question: if you agree with me that we’ve come a long way – how do we end the war?” he asked.

The answer, he argued, is contained in the question – what does it take to sustain a war? By removing the “pillars” essential to keeping the war going, he mused, we can effectively end it.

Recruiters try to hustle the working class “by offering war in Iraq disguised as a college education.”

Hayden listed several of the “pillars” of support for the war, familiar to most who have followed the development of his argument in articles on tomhayden.com and in workshops:

Public Opinion – which has shifted against the war, both in the US and in Iraq
Committed Soldiers – most of whom have been alienated by the back door draft and ’stop loss’ programs that keep them indentured servants of the Empire.
Bipartisan Support in Washington – all but evaporated by all accounts
Global Support – The ‘Coalition Of The Willing’, in terms of international support, has disintegrated as European nations have pulled their troops out of Iraq
Military Recruitment – in dismal shape as evidenced by the Pentagon now targeting their fiercest enemy: Parents
“The Iraqi state is more a fiction than not.” – Hayden

The way forward, according to Hayden, is to force politicians seeking office to be “as antiwar as possible” in a presidential election. Hayden revealed that MoveOn.org has 90 paid organizers working to make this happen. The Bush/Hamilton plan, designed to leave 30,000 US ‘trainers’ in Iraq and fashion an oil law that would allow US and UK oil companies to return to Iraq must be confronted and declared unacceptable – by forcing politicians to face the fact that the pillars of support for the war are gone and the best they can hope for, as emmissaries of a “Machiavellian State” is to save face by getting out while the getting is good. The way to do this, according to Hayden, is to (1) work towards creating an Iraqi government that will invite us to leave (as opposed to installing and propping up a “harsh, sectarian, repressive state”); (2) setting a “date certain” by which all US troops will be withdrawn, and; (3) by seeking international assistance to help stabilize Iraq once the US is out. Hayden argued that a “face saving” peace is what a “Machiavellian Superpower” must have in order to prevent a drawn out blood bath – and antiwar activists must pressure politicians to accept the need for a face saving peace and to work towards realizing it. This task is getting easier, according to Hayden: “(As) the pillars go down, the politicians will support ending the war,” he said.

“Politicans are human beings, I have carefully concluded…but their incentive is to stay in power.” – Hayden

Hayden urged activists to stay focused and to keep their eyes on the prize – the goal of ending the System that produces wars like Viet Nam and Iraq cannot be attained overnight but by ending the war a serious defeat can be handed to the Machiavellians who would pursue a policy of permanent war. So, as Bush suffers “impeachment by a thousand cuts”, activists must continue to press those politicians who have jumped off his sinking ship to support ending the war.

Hayden’s scholarly examination of the etiology of the war – and his prescription for ending it are elaborated in his new book. Chapter Four, in particular, will be useful to organizers. Hayden lists eight “pillars” in separate sections with each section being concluded by a laundry list of what actions antiwar activists can take to knock down these pillars of greed and avarice.

The following items are drawn from the book {2} and presented here not in terms of the pillars formulation but by a broader theme each grouping holds in common. What struck me on reading the book was that the tasks are very good – well thought out – but not every group or oraganizer has the same electoral approach as Hayden. However, even those who do not share Hayden’s electoral focus can find things in the book that are very useful. The book is a good read, informative in many ways and full of good strategic and tactical advice for organizers – some of which is presented below. The speech was not Hayden’s best but many parts of it were fascinating. And the book is a worthy complement to Alinsky’s Rules For Radicals and Randy Shaw’s Activist’s Handbook.

Here is what antiwar activists must do to end the war, according to Hayden…

Confront The Media’s Complicity In The War:

Demand the media (and politicians) report on Iraqi public opinion polls.
Hold accountable the elites who control mass-media (and politics).
Lobby the mainstream media to demand better Iraq coverage.
Expand the independent media to all corners of society. Create community based outlets whose purpose is to expose and publicize the stories marginalized by mainstream media.
Demand that Johns Hopkins University’s Bloomberg School of Public Health figure of 655,000 Iraqi war-related civilian deaths (between March 2003 and July 2006) be acknowledged as the most credible.
Confront The Politicians’ Complicity In The War:

Demand hearings on taxpayer funding for Iraqi ministries “filled by militias and death squads.”
Demand to know why American troops are supporting the Shi’a-Kurdish side in a civil war – rather than a transitional government that could set a deadline for the U.S. departure in an orderly way.
Work on the fencesitting voter to end the war. Do grassroots outreach in congressional districts.
Isolate and divide President Bush from Republicans by threat of greater political defeat if his administration deepens the quagmire any further.
Establish local coalitions to make it as difficult as possible for anyone to be elected president in 2008 without a pledge and a plan to withdraw.
Demand all candidates for public office refer to the costs of war in their platforms and public presentations.
Demand accountability, indictments for fraud, and new policies for dealing directly with Iraqis for reconstruction.
Demand the new Congress hold hearings on torture, rendition, repression, and domestic spying.
Support Representative Henry Waxman’s hearings on war profiteering by Halliburton et al.
Coalition Activism:

Build links with labor/fair trade coalitions around anti-privatization issues, using Iraq as an example; and with environmental groups citing Iraq as one of the worst oil-pollution sites in world.
Support the ACLU in their opposition to the Patriot Act.
Build coalitions with inner-city, labor, senior, health, education, and environmental groups, along with local officials.
Encourage clergy and people of faith to take the lead in denouncing the immorality of the war, refusing taxes for torture, and countering pro-war stands among Christian and Jewish neoconservatives.
Apply pressure on the (UN) Security Council members by creating links between movements, NGOs, and parliamentarians – through the Internet and in venues like the World Social Forum.
Grassroots Organizing:

Oppose the resumption of a military draft.
Identify soldiers and military families petitioning against the war as potential spokespeople.
Demand funds for protective equipment, veterans’ benefits, health treatment, and peer counseling for soldiers.
Distribute and organize community forums around films like Arlington West and The Ground Truth.
Bring home the costs of war using data from sources like the National Priorities Project to reveal the impact on education, health care, housing, and the environment.
Increase counter-recruitment and anti-contractor campaigns.
Set a goal of doubling the active group membership every year.
Build an ongoing and expanding e-mail alert list.
Develop the capacity to intervene with endorsements, volunteers, and funding in contested political races, including party committee races.
Work with online groups to publicly oppose pro-war or compromised candidates for office.
Assign a liaison to every high school and community college campus to oppose military recruiters.
Assign a liaison to veterans opposed to the war and veterans’ benefits advocates.
Assign liaisons to local groups facing budget cutbacks on domestic programs.
Develop the capacity to carry out effective civil disobedience.
Local groups should position themselves where they can be effective without putting unrealistic strains on their own resources.
NOTES