ENVIRONMENT : A Point of No Return for Greenland’s Ice 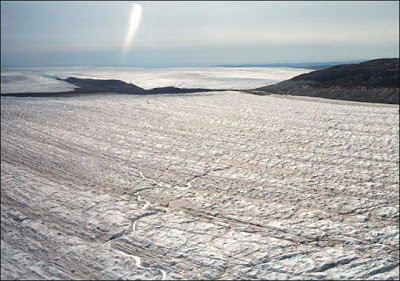 Melt water is seen here running over the Greenlandic icecap, in August, 2007. A new analysis suggests there is a tipping point, in terms of how much carbon dioxide is added to the atmosphere, beyond which Greenland’s ice will be forever lost. Photo from Getty Images
Total meltdown: Sea level rise of 20 feet
By Jessica Marshall / July 25, 2008

July 25, 2008 — Every molecule of carbon dioxide added to the atmosphere brings Greenland’s ice sheet closer to irreversible melting — and a sea level rise of more than 20 feet.

A new analysis suggests that if we pass a certain threshold of total emissions, the ice sheet will melt completely, no matter how high or low a peak CO2 concentration is reached or how quickly emissions are reduced afterward.

“A peak warming for a very short period will have an impact, but it might not be enough to cause long-term melting,” said John Church of the Center for Australian Weather and Climate Research in Hobart, Australia, who was not a part of the study. “It’s a matter of getting the temperatures up and keeping them up.”

“We show that it’s not really a question of how much CO2 in terms of 700 or 800 ppm [parts per million] in the atmosphere,” said study author Gilles Ramstein of the Centre National de la Recherche Scientifique in Gif-sur-Yvette, France “It’s really about cumulative doses. That means you can get a deglaciation of Greenland at 700 ppm if you reach this value and stay on that value for a long time.”

The researchers used a climate model designed to reach over very long timescales — tens of thousands of years — to test the effect of different emissions scenarios on the extent of Greenland ice melting over millennia.

Their results indicate that regardless of the peak CO2 concentration, if total emissions surpass 3,800 billion tons of carbon, the Greenland ice sheet will melt completely over thousands of years. So far, humans have emitted about 380 billion tons of carbon from fossil fuel combustion, according to the researchers.

It will take longer — perhaps thousands of years longer — to melt Greenland completely, the longer it takes to reach the threshold. But once the threshold is passed, the melting will be irreversible, because CO2 stays in the atmosphere for hundreds of years, and because positive feedback cycles — where loss of snow increases heat absorption by darker, exposed surfaces — will propagate melting.

And, the researchers emphasize, the true threshold may be lower than they calculate.

“What we found here is largely an underestimate,” Ramstein said. “We have a model that is quite simple, with coarse resolution so that it can simulate for thousands of years. You might actually get complete melting for lower carbon emissions.” The work was published in Geophysical Research Letters.

Scenarios below the 3,800-billion-ton threshold led to a reduction in the ice sheet size of 10 to 63 percent over the course of the simulations, still a concerning loss. “Even one meter of sea level rise is a complete catastrophe,” Ramstein said.

“Rates of a meter per century are feasible,” Church said, so it will not take thousands of years to feel the effects of melting.

“This is only the northern part of the story,” Ramstein added. “There is also a southern part, in Antarctica. In the south there is the ice shelf. This makes west Antarctica very vulnerable to changes.”

This entry was posted in RagBlog and tagged Ecology, Environment, Global Warming, Oceans. Bookmark the permalink.