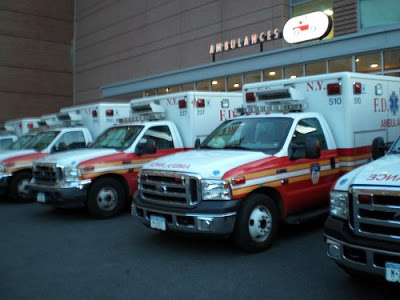 Last month, Esmin Green, a 49-year-old mother of six, tumbled off her chair and onto the floor of the Kings County psychiatric E.R. waiting room in New York City.

Members of the hospital staff saw her lying there but did nothing for about an hour. When Green was finally brought into the E.R., she was dead. An autopsy revealed that she died from a pulmonary embolism, which occurs when a blood clot forms in the leg, breaks off, and travels to one or both lungs. This can also kill long-haul airplane passengers who sit in one spot for hours: The blood sits stagnant in their legs for so long that it clots. You could say that Green, too, had been on a plane ride of sorts. She’d waited for a psychiatric-unit bed to open up for more than 24 hours, roughly the same time as a trip from New York to Tanzania.

The surveillance video of Green collapsing and lying untended, as hospital staff at Kings County fail to respond to her collapse, is inexcusable by any stretch. And so Nancy Grace, for one, focused on the negligence. But what’s largely missing from this story is the likely cause of Green’s pulmonary embolism. The answer lies in a far more systematic and widespread danger in hospital care: E.R. waits. Why was Green sitting and waiting while blood pooled in her legs? Despite increasing evidence that crowded E.R.s can be hazardous to your health, hospitals have incentives to keep their E.R. patients waiting. As a result, there has been an explosion in E.R. wait times over the past few years, even for those who are the sickest.

A major cause for E.R. crowding is the hospital practice of boarding inpatients in emergency departments. This happens when patients who come to the E.R. need to be admitted overnight. If there are no inpatient beds in the hospital (or no extra inpatient nurses on duty that day) then the patient stays in the E.R. long past the completion of the initial emergency work. This is what happened to Green, and it has become widespread and common. The problem is that boarding shifts E.R. resources away from the new patients in the waiting room. While E.R. patients wait for inpatient beds, new patients wait longer to see a doctor. As more new patients come, the waits grow. And an E.R. filled with boarding patients and a full waiting room is an unhappy E.R.: The atmosphere is at once static and chaotic. If you or a loved one has waited for hours in an E.R., you know what we mean. The environment can be unsafe and even deadly. A recent study found that critically ill patients who board for more than six hours in the E.R. are 4 percent more likely to die.

What hospital would promote such a practice? Potentially, those that profit more from boarding, particularly in poorer communities with high numbers of uninsured and Medicaid patients. Imagine you run a hospital. There are two competing sources for inpatient beds. The first source is patients who come in through direct and transfer admissions. They are more likely to come with private insurance and need procedural care, both of which maximize profits. The second source is E.R. patients, who are more likely to be uninsured or have pittance-paying Medicaid and less likely to need high-margin procedures. Do the math: If you fill your hospital with the direct and transfer admissions and maroon the E.R. patients for long periods, you make more money.

In effect, then, E.R. boarding allows hospitals to insulate themselves from the burgeoning needs of the poor. E.R.s are safety nets: By law, we who work in them see any and all patients, regardless of their ability to pay. But as more E.R. beds are devoted to boarders, the E.R. has less space for new patients, which keeps a lid on the number of un- and underinsured. So unless you are having a heart attack and can jump the line, your emergency—though it may still be serious—may wait for so long that you give up and go home. Bad for you, good for the hospital’s bottom line. E.R. boarding also tamps down nursing costs, again not to your benefit. Hospitals generally maintain strict patient-to-nurse ratios for inpatients. But many hospitals don’t apply the same rules to the E.R. because they can’t control the number of patients who come in that way. Sometimes the nursing ratio in the E.R. can be as high as 8-to-1. That’s unacceptable in inpatient units, but just stack ’em in the E.R. hallways and suddenly it’s OK.

What about the staff upstairs, who take care of the admitted patients once they leave the E.R.? Their incentives are misaligned, too. Put yourself in an inpatient nurse’s shoes. You are overworked, and your current patients need attention. You get a call from the E.R., saying that a patient like Green is ready to come upstairs. The bed is clean and ready. But you have 20 more things to do before your shift ends in two hours, and you won’t get paid an extra cent if you accept Green to the empty bed. Can’t she wait just a bit more in the E.R.? When the next nurse comes on fresh, you tell yourself, she can admit the new patient. You won’t get in trouble for stalling because no one really measures how long patients stay in the E.R.. So you tell the E.R. nurse that the bed isn’t ready yet. This practice of “bed-hiding” is more common than you think.

What can be done about all this? We think the answer is that hospitals should have to disclose and take responsibility for how long E.R. patients—that is, you—wait for beds. But, not surprisingly, hospitals have lobbied hard to not be held accountable for E.R. crowding and boarding. If they won’t measure and eliminate E.R. boarding on their own, then the federal Centers for Medicare & Medicaid Services, which pays many hospital patients’ bills, or the Joint Commission, which accredits hospitals, should take this on.

And let’s also hold congressional hearings on E.R. boarding. In England, the National Health System now has a rule that 98 percent of patients have to spend less than four hours in the E.R.. Apparently, the son of a member of parliament spent too long in an E.R., we’ve heard. Esmin Green wasn’t well-connected. But her death should serve as a similar prompt to fix the problem of endless waiting.

Meanwhile, if you have to go the E.R., you can vote with your feet. When you are really sick, of course, go to the closest E.R. or call an ambulance. But if you can wait long enough to choose, go to the E.R. where they don’t make patients wait or board for long periods. Yes, we know—since hospitals don’t publicize E.R. waits or boarding, you’ll have to go by word of mouth. If, despite your efforts, you or your grandmother is forced to lie in the E.R. all night, complain directly to the hospital administrators who actually have the power to fix the problem. But don’t count on any major changes. As long as hospitals profit more from boarding and aren’t forced to admit to doing it, your trip to the E.R. will be as long as a flight to Africa—but without the in-flight movie and far more risky.

Zachary F. Meisel is a practicing emergency physician and a Robert Wood Johnson Foundation clinical scholar at the University of Pennsylvania.

Jesse M. Pines is a practicing emergency physician and an assistant professor of emergency medicine and epidemiology at the University of Pennsylvania School of Medicine.

This entry was posted in RagBlog and tagged Health Care, Medicine. Bookmark the permalink.