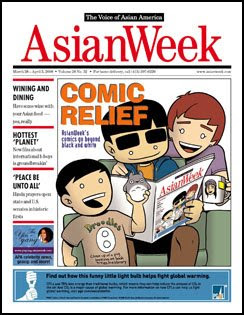 The danger of losing the ethnic media

With their ability to tap into the communities they serve, the ethnic media contribute context, history, and perspectives found nowhere else.

AsianWeek, San Francisco’s English-language weekly for Asian Americans, and San Francisco Bay View, which has served the black community there for three decades, both have dumped their print editions. Siglo21, a Spanish-language paper published in Lawrence, is returning to publishing weekly after three months as a daily due to declining advertising. Ming Pao Daily in New York will shut down entirely, while Hoy New York abandoned print at the end of last year. At the venerable Ebony and Jet in Chicago, all employees must reapply for their jobs – that is, the jobs that remain.

With the ever-deepening cuts across the news business, these losses may seem worth no more than a shrug. AsianWeek, after all, employs only 11 staffers. But the harm goes deep. Ethnic media play a vital role in the communities they serve and do a great deal of unrecognized work for journalism.

Ethnic media, like other news media, recognize that an informed populace will help keep government accountable. Armed with knowledge of current events and issues, the public can become wise participants in societal decision-making. Ethnic media also cultivate democracy in ways that the mainstream seems to have abandoned. Univision, for instance, has led bipartisan citizenship and voter registration drives during the past two presidential elections. This involvement in the democratic process might appear unseemly to some traditionalists. But at least according to the Society of Professional Journalists Code of Ethics, this is the US news media’s fundamental role: to further democracy.

Day after day, the various branches of the ethnic media follow some of the most important and contentious issues, ones that grab the attention of the mainstream only sporadically. Take immigration. A reader might find a story now and then on CNN or the Associated Press. But Impremedia, which owns eight Spanish-language print outlets including Hoy New York, features as many as 10 immigration stories on its website every day.

Ethnic media can help steer the mainstream away from short-sighted and shallow reporting on communities and the ways in which race and ethnicity operate in all of our lives. When the New Yorker and National Public Radio’s Daniel Schorr declared that Barack Obama’s campaign signaled a new, “post-racial” era, the rest of the mainstream took up the theme. We do all get along, the story went, and Obama’s success proved it. The black media, however, were quick to point out that one black president might create dramatic change, but could not transform a history of institutionalized inequities.

When the New Yorker ran its infamous caricature of Barack and Michelle Obama, the mainstream news interviewed comedians who worried about making fun of a black president. But Eric Easter of Ebony/Jet offered more insight. He wrote about the powerful impact of grotesque, racialized cartoons, from political propaganda of the Nazi era to family fare of recent decades, that “still find their ways . . . into the backs of our minds.” The New Yorker cover did not affront because the joke failed, but because it harkened back to the dehumanizing imagery that takes up residence in our reactive minds.

Ethnic media see their role as primarily to give voice to the community, strengthen cohesion, and chronicle community life. They also consider it important to correct misperceptions promulgated by the rest of the news. They report about the community from the inside out, sometimes quite literally. When inmates of the Reeves County Detention Center protested poor medical care at the privately run Texas facility, most outlets highlighted the damage to buildings. Telemundo’s station in Midland/Odessa, Texas, also described the plight of hundreds of inmates – detained there on immigration violations – who slept outside in makeshift tents despite the freezing weather.

More than 42 percent of print newsrooms across the country employ no black, Asian American, Latino, or American Indian journalists at all. According to even the most generous analyses, they consult white sources at least two-thirds of the time. With their ability to tap into the communities they serve, the ethnic media contribute context, history, and perspectives found nowhere else.